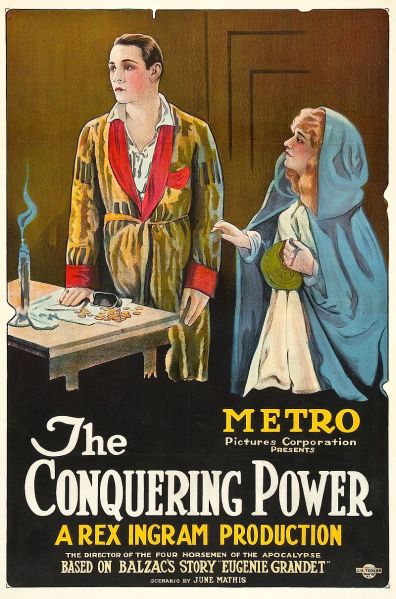 Released 8 July 1921, The Conquering Power was Rudy Valentino’s second film after he shot to superstardom with The Four Horsemen of the Apocalypse. It’s always been one of my favorites.

Though Honoré de Balzac’s 1833 novel Eugénie Grandet is set in 1819, The Conquering Power is set in the present. An intertitle explains, “Commercialism tells us that you, Great Public, do not like the costume play. Life is life, so we make our story of today, that you may recognize each character as it comes your way.”

Charles Grandet (Rudy), 27-year-old son and heir of banker Victor Grandet, is leading a carefree, hedonistic life in Paris until his father is hit with devastating financial problems. Rather than confess the truth, Victor sends Charles to his long-estranged brother, also named Charles, in Noyant. He mentions that Charles, Sr. (Père Grandet) has a daughter a few years younger than Charles, Jr.

Père Grandet (Ralph Lewis) is a very wealthy man. However, he’s a regular Scrooge, and forces his own family to live in poverty so he can accumulate even more miserly wealth. He also refuses to let his daughter Eugénie (Alice Terry) marry because he thinks men are only after his gold.

When Charles arrives in Noyant, he assumes the grand castle must belong to his uncle. A local tells him Père Grandet indeed owns Château Froidfond, but he lives in the village. Not only that, Charles will have to enter his uncle’s house in back, since the front door hasn’t been used for twenty years.

Charles gives his uncle a letter from his father, in which Victor explains he’s been financially ruined by stock market speculation and owes millions. Rather than have his reputation ruined, he’ll take his own life. His dying prayer is that his brother will be like a father to his boy.

Père Grandet does no such thing, and instead forces Charles and his pet poodle to live in complete austerity, without even heat or light. 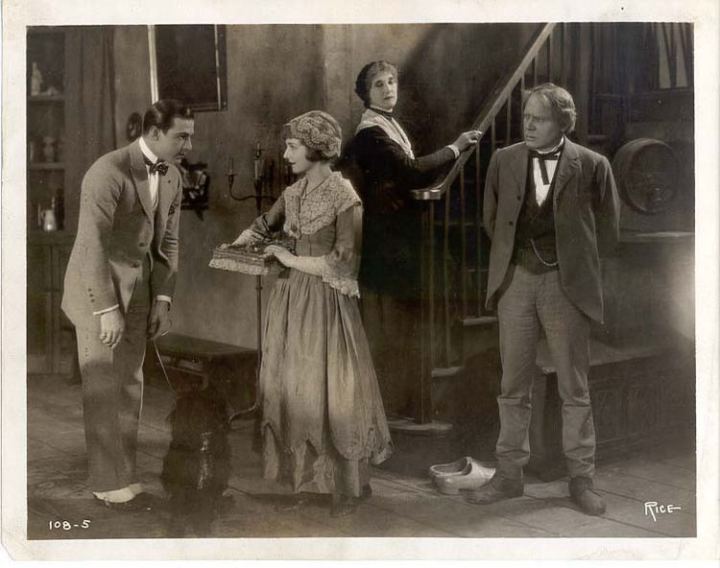 Charles is devastated to read in the newspaper that his father took his own life, and goes back to Paris to settle financial affairs. While he’s away, Père Grandet disposes of Eugénie’s suitors and dismisses the idea of marrying her to Charles. He’d rather see her dead than married to his nephew.

When Charles returns, Père Grandet tells him he’s devised a plan to clear Victor’s name of any dishonor. Of course, this is a complete lie. Père Grandet spends all night counting his gold so he can make a profit from his brother’s misfortune.

While Père Grandet is in his vault room, Eugénie finds Charles asleep at his desk, his face stained with tears. She tenderly pulls his cloak over him so he’ll be a little warmer. Before leaving, Eugénie sees a letter Charles wrote to his sweetheart Annette, saying all the joy has gone out of his life with the realization that it’s selfish and impossible to ask her to wait for him. He plans to go to the West Indies, though after his passage is paid, he won’t have any money left. Charles also says Eugénie has a face like an angel, and that she’s been his only comfort.

Eugénie gives her own gold to Charles, one coin for each year of her life. At first, he’s very hesitant to accept the loan, but Eugénie is very persistent. Charles gives her a golden box from his mother and the miniatures of his parents, his most precious possessions, to keep until he can repay her.

Charles and Eugénie then begin a romance. 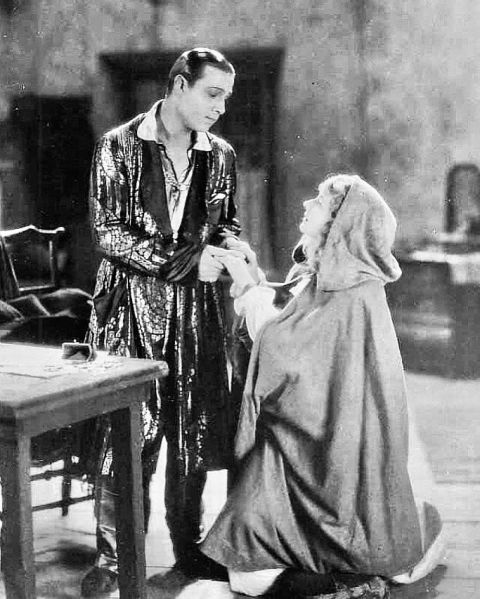 Ever the miser, Père Grandet doesn’t inform Charles that Victor’s outstanding debts were bought for 25% of their value and that he cleared several thousand francs from this. Instead, he speeds up his nephew’s departure for Martinique and tricks him into signing over his inheritance.

Charles prospers thanks to the loaned gold, but his only thoughts are of Eugénie. He’s devastated to get a letter from Père Grandet, announcing Eugénie’s engagement  and advising Charles to never contact her again.

And then Père Grandet discovers Eugénie gave Charles her gold, and the Sturm und Drang starts coming ever thicker and faster. Will Charles and Eugénie ever discover the truth and regain their love and money?