For my New Year’s snippet, I’m sharing from Chapter 11, “New Year’s Eve Delight,” of my long-hiatused WIP Justine Grown Up, the third book in my contemporary historical family saga about the Troys and the Ryans, and a modern retelling of sorts of Margaret Sidney’s Phronsie Pepper. It’s now New Year’s Eve 1979, and instead of spending the entire holiday sharing private romantic moments, Justine and David are forced to endure the negative running commentary of older siblings who still see them as children.

Justine’s jealous feelings at the birth of Julie’s first child are quickly turned around when she reconnects with David, now twenty-five and a Ph.D. student. Unfortunately, her older siblings and their friends have a hard time seeing her, after years of being the precious family baby, as a grownup woman who’s old enough for marriage, motherhood, and moving out with her new family. But then, when her young nieces become Duranies, an unexpected opportunity opens up for Justine to finally prove once and for all to her family that she’s a responsible, capable, mature adult.

When the tray of food is passed around to her, she takes a handful of nuts and a few crackers.

“Would you like something to drink with that?” David asks.

“Watch it,” Adicia says. “Justine won’t be twenty-one till March. Have you ever given her alcohol before?”

“Of course not! I rarely drink myself, but it’s nice to have a little on holidays and special occasions.”

“You’ve let me have champagne and wine before on New Year’s Eve,” Justine says.

“Yeah, but I’m your sister, not an older boyfriend who’s slept his way across Europe!”

“I slept with a handful of women, not the entire female population!” David says.

Justine grudgingly accepts the orange egg cream David brings her in place of champagne. During the remaining few minutes of the decade, she sits snuggled up against him, trying to tune out the rest of their families. If they were in Times Square, she’d probably be kissing her new boyfriend, but for now she’ll have to settle for a hug to greet 1980.

“Don’t worry,” David whispers. “We’ll be back in Albany soon enough and can have all the privacy we want. In the meantime, the anticipation will make it better.”

Since today is George Harrison’s 19th Jahrzeit (death anniversary), I’m sharing something from Chapter 17 of Little Ragdoll, “Letters to and from Lucine and Emeline.” In autumn 1964, youngest Troy sisters Ernestine, Adicia, and Justine write to their closest older sisters, who left home young to escape their toxic parents. Eighteen-year-old Lucine is now at Hunter College, and 16-year-old Emeline is attending an uptown boarding school on full scholarship.

Near the end of her letter, Emeline explains why George is her favorite Beatle.

To answer Ernestine’s question, yes, I do like The Beatles (and I can’t believe she’s old enough to have celebrity crushes!). Maybe I’m a little too old for them, but it’s not like I’m one of those screaming young girls who’s only thinking about how cute they are and can’t hear them singing or playing their instruments. Liking somebody’s music has nothing to do with how cute they are, though it does help if someone is good-looking in addition to talented.

My favorite is George. I guess it’s because he’s the baby of the group, and it makes me think of my own dear little sisters and how the baby of a family needs special mothering, love, and protection. Is it a good or a bad thing I feel such a strong mothering instinct at only sixteen? Besides, I know how it feels to be pegged ‘the quiet one.’ That label sticks, and people sometimes don’t expect much of you since they think you’re not talkative. But boy, will I prove to anyone who thinks I’m just another quiet, bookish girl that still waters can run deep when I go into the world and make something of myself!

They’ve just been served a mouth-watering Thanksgiving feast, and Adicia can’t help thinking about how the rest of her family is missing out.

Her parents and brothers don’t know what they’re missing, though she does feel sorry for Allen. He probably would come to eat with them, but feels an illogical need to appease their parents and go along with their lifestyle. Emeline says Allen’s a Gemini, the astrological sign of the twins, Pollux and Castor. One of the common characteristics associated with Gemini is acting like two different people, a pull in two different directions.

Adicia doesn’t understand some of these things Emeline knows so much about from all her prolific reading, but she does know she feels very sorry for Allen, stuck in the tenement with their horrible parents and the insufferable Tommy. Mrs. Troy didn’t have to be so rude and mean to him just because he dared to ask for some turkey meat. Adicia hopes Tommy eats so much of that leftover turkey from the garbage that he chokes.

Sarah is holding Justine on her lap and feeding her a bottle of Enfamil when one of the mission volunteers brings more food. The volunteer squeezes Justine’s little hand and smiles down at her. Justine’s blue eyes light up at the extra attention.

“If you’d like, we can bring some baby food to your little girl. We have food even for the littlest guests who come to our tables. You don’t want to only drink baby formula on a big holiday, do you, sweetie?”

Sarah doesn’t correct her. As it is, the four middle girls are fellow brunettes, and she goes out with them more than their own parents.

“Our baby’s named Justine Anastasie,” Ernestine volunteers proudly. “Our dad’s French, so we all got at least one French name. She’s gonna be nine months old next week, since she was born on March second. March to December equals nine months.”

The scents of delicious food are overwhelming when they enter the dining hall. Adicia eagerly rushes over to a table with five available chairs and place settings, making sure it’s near the end of the table so they have space for Justine’s stroller.

“Do you mind that you never eat kosher meat, Sarah?” Emeline asks as they’re being served.

“You eat what you can when you don’t have money. Besides, I wasn’t from a religious family. Most German Jews weren’t religious. My family wasn’t anti-religious, but we weren’t Orthodox either.”

“Judaism has different denominations like Christianity? I haven’t read many books on world religions. I don’t even know what denomination my family’s supposed to be, just that we were baptized some type of Protestant.”

“I don’t know either,” Lucine says. “Why did our parents bother having us baptized if we only go to church on major holidays?”

“There are four major branches of Judaism,” Sarah says. “Then there are many different communities in the Orthodox world, and small branches like Karaites. We can look for a good book about it next time we go to the library.”

Adicia practically inhales the feast set before her. Roast turkey, mashed potatoes, cranberry sauce, stuffing, yams, vegetables, pumpkin, pecan, and apple pie, applesauce, and piping-hot rolls. The volunteers and mission workers are very special for buying, preparing, and serving all this food to so many people, and then cleaning up it all up. 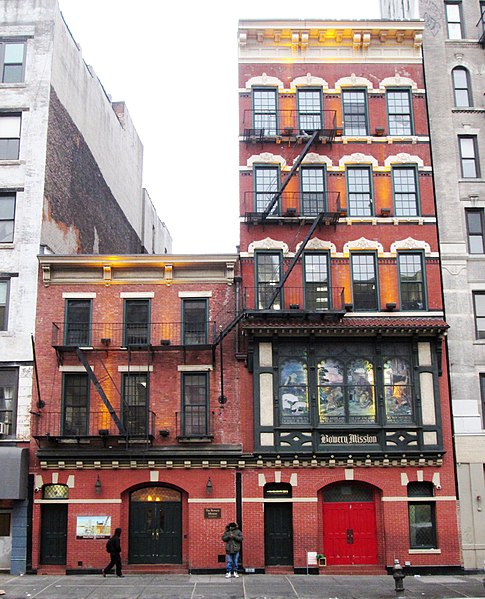 The Bowery Mission, Copyright Beyond My Ken

This year’s Thanksgiving excerpts come from Chapter 4, “Thanksgiving 1959,” of Little Ragdoll.  While Adicia Troy and her four closest sisters are going to dinner at the Bowery Mission with their surrogate mother Sarah, and oldest sister Gemma is going to a friend’s house, the rest of the Troys bar delinquent Carlos are staying in the tenement for a pathetic excuse of a holiday meal.

“I got some turkey breast lunchmeat at the deli for seventy-five percent off since it was two days past the expiration date,” Mrs. Troy says proudly. “Our darling baby Tommy will eat even better than us, since I found some turkey meat at my job the other day. These rich people who eat at that hotel never ask for their leftovers to be wrapped up, so the wait staff throws the excess food in the garbage. People who throw food in the garbage are fools. I bet they’d have heart attacks if they knew poor people like us are getting free meals thanks to their pompous stupidity.”

“How much turkey meat is there?” Allen asks excitedly. “I hope it can feed all of us!”

“You ain’t getting none. That meat is for Tommy and Tommy only. You’re only my third-born; Tommy is my precious baby boy and the first boy after four girls in a row.”

“But what if there’s leftovers? You really think a three-year-old kid can eat a full adult-size serving?”

“Tommy can get as chubby as he wants. It means my baby’s staying warm with extra body fat even if we can’t afford a rich boy’s coat. Now shut up and start setting the table.”

“I guess now ain’t the right time to ask why you and Dad always seem to have enough money for drugs and alcohol but not enough money to buy decent groceries.” Allen stalks over to the cupboard and pulls out four chipped white and orange plates from a tableware set his parents got as a wedding gift in 1941.