DeWitt Clinton Park was created in Hell’s Kitchen in 1902, designed by landscape architect Samuel Parsons, Jr. It originally encompassed 7.4 acres and extended to the Hudson River, with a running track, gymnasium, bathing pavilion, curved paths with viewing desks of the Palisades and Hudson River, and playgrounds.

At the center was a children’s farm, the first of its kind in the city, with a pergola, flowerbeds, observations plots, and 356 4×8 vegetable gardens. Each vegetable garden was assigned to a “little farmer.”

The land for this refreshing urban oasis came from the Striker, Mott, and Hopper farmsteads. Their houses were torn down in 1895 and 1896. Other buildings on this site were demolished in 1902. 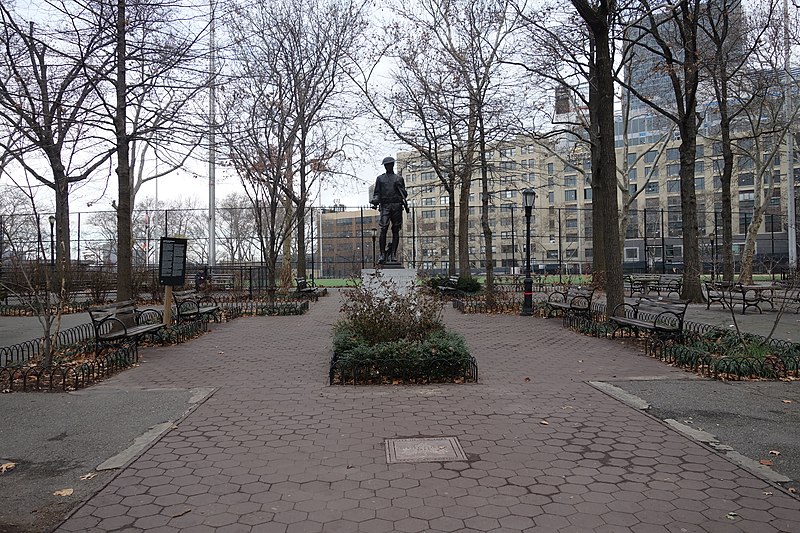 In 1904, in The Atlantic Monthly, Albert Shaw wrote of the area on the eve of its rehabilitation:

“The most vivid imagination could not have conceived a more desolate spot than this was in the summer of 1902. Approached from the east, through filthy streets crowded with noisy, dirty urchins, it loomed up a dark blot upon the beautiful background of cool river, green hills, and blue sky. Rows of tumble-down houses, disused carts, piles of rubbish, stones, rags, and litter, among which the children played, made even the streets seem neat and orderly by comparison.” 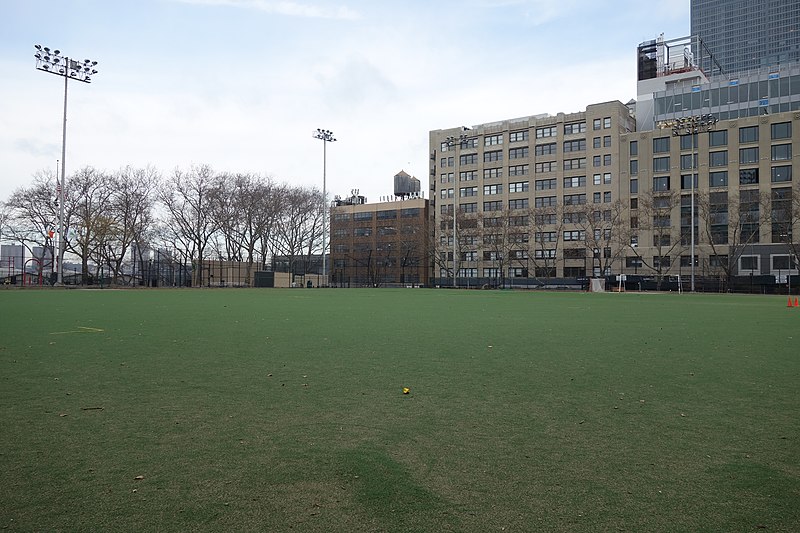 In 1930, a statue of a doughboy was added, designed by Burt Johnson (whose sister Annetta was a sister-in-law of Augustus Saint-Gaudens). The children’s gardens were taken away in 1932 to build the West Side Elevated Highway. The soil was taken to Central Park to fill in the Lower Reservoir, which later became the Great Lawn.

The park shrank even further in 1935 when the New York Passenger Ship Terminal was built. Gone were the beautiful, unobstructed views of the Hudson River and Palisades. Also gone were the music stands, big arbor, and undulating lawn, replaced by baseball fields, a playground, basketball and handball courts, and a dog park. 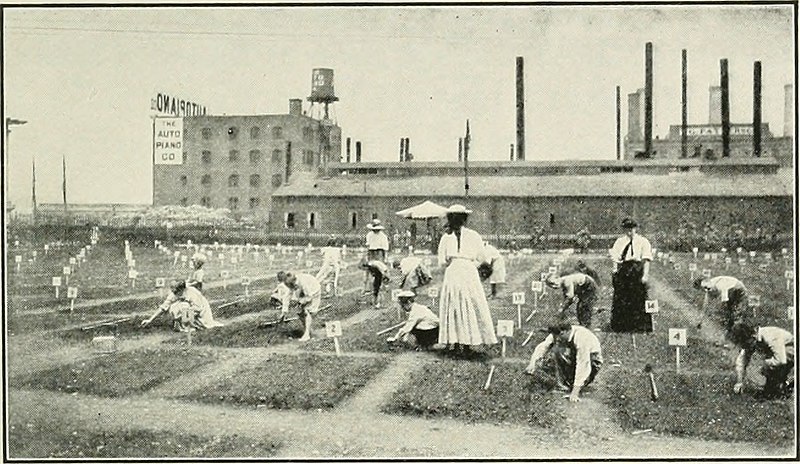 In 1959, locals tried to rename their neighborhood after the park, because who wants to live in a place called Hell’s Kitchen? Though regardless of the name, this was a tough, violent neighborhood in that era, rife with gang activity and murders. Some people steadfastly call it Clinton, but its name officially remains Hell’s Kitchen.

Many people had left the area by the 1980s and 1990s, and the park was well-known as a drug den and homeless encampment. In October 1986, three teens murdered a homeless man there.

In 1995, the park slowly started returning to its former glory, though it’ll never be as large and beautiful as it was long ago and worlds apart. 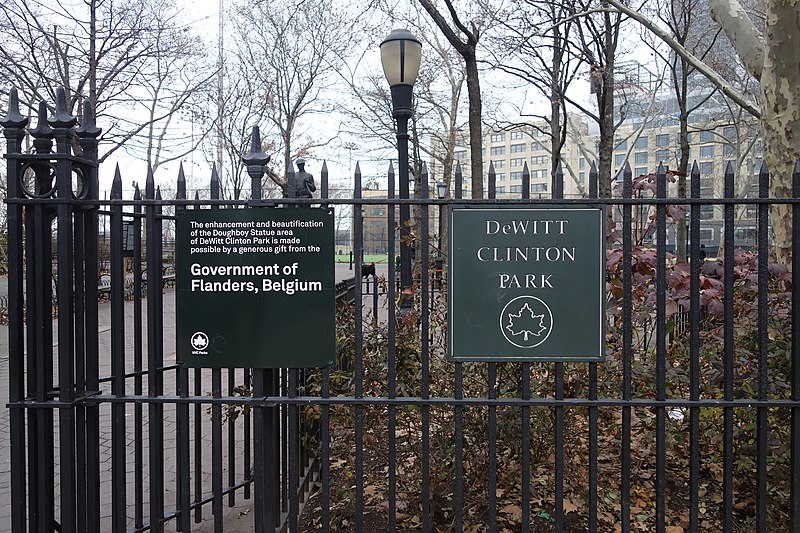 My character Igor Konev is driving his sister Irina’s friend Léa Kahn to Barnard’s new student orientation weekend in September 1951 when a red tabby with a kitten in her mouth appears in the road. Léa insists Igor follow her, since it’s not right for a cat with kittens to be homeless.

They finally see her entering DeWitt Clinton Park, where she deposits her kitten by one of the sycamores lining a curved path on the western side, in a spot with five other kittens. The cat promptly takes off, and Igor gets back in the car to follow her while Léa stays with the kittens.

When Igor returns with the mother and seven other kittens, including a chimera runt much smaller than most runts, he finds Léa sitting by the sycamores and talking to a a little African–American girl and her rather young mother. They’re all petting the kittens.

“So much for your claim about most people in this city only associating with their own kind,” Léa says as the car starts back towards Brooks Hall on Broadway, the mother cat and runt on her lap. “They saw I’m different from the others in my own way, so they started conversation with me. Anyone with green hair, three earrings in each ear, and flamboyant fashion isn’t a conformist who only cares about people exactly like herself.”