Yalta, a resort city in the south Crimea, is located within a strip of mountains known as the Yalta Amphitheatre on account of its curved shape. Archaeological evidence shows it was first settled by the Taurians during the Bronze Age.

The Greeks who first lived there called the city Yalita, derived from gialos (pronounced yalos) (beach, seashore). According to legend, they had sailed a long time in search of a shore, and were so grateful to see land again they named their settlement after their landing-place. Over the ensuing centuries, it was also variously known as Galita, Jalita, Kaulita, Gealita, and Etalita.

In the second half of the 13th century, Venetian merchants settled in this successful port and fishing settlement. They were forced out by the Genoese in the 14th century, and Yalita became one of Genoa’s fortified trading colonies on the Crimean coast. The ruins of a fortress from the 12th to 15th centuries have been found by the Uchan-Su waterfall.

In the late Middle Ages, Yalita was part of the small Theodoro principality in the southern Crimea, the last gasp of the Byzantine Empire. Most of its inhabitants at this time were Armenians, Greeks, Crimean Goths, Circassians, and a few other ethnic groups.

In 1475, the Ottomans captured the Crimean peninsula from Genoa and annexed it to their Crimean Khanate with much looting, killing, and burning. Yalita became part of the Mangup Kadylyk district. Though this khanate was ruled by Tatars and thus semi-independent, Yalita itself was under direct Ottoman rule.

Yalita was further destroyed by an earthquake in the late 15th century. Seventy years later, the area was repopulated by Armenians and Greeks. Around this time, the modern name Yalta arose.

There was a large slave market nearby, trading in Ukrainians and Russians captured from regular raids.

In 1778, the Crimean Greeks and other Christians were forced to move to Mariupol on orders of the Russian government, and established a nearby village also called Yalta. When Russia annexed the Crimea in 1783, the Muslim population left en masse too. Barely anyone lived in Yalta by the time the Russo–Turkish War broke out in 1787. The once-flourishing city had become a tiny fishing village.

In 1823, Count Mikhail Semyonovich Vorontsov, governor-general of the Novorossiysk Territory which included Yalta, distributed 200 acres of land for the purposes of rebuilding the area and planting vineyards and orchards. Yalta received city status in 1838, though it only had one street, 130 residents, and 30 courtyards.

It was very difficult to reach Yalta until 1837, when a gravel road was built. In 1848, a proper road to Sevastopol was built. Yalta didn’t even have a seaport anymore, and the pier built in the late 1830s was destroyed by a storm.

During the Crimean War of 1853–56, local nobility donated 1,100 rubles to the soldiers, the sick, and the wounded. They also helped with food, clothing, wound dressings, and vehicles. Local residents were eager to assist the Russian forces in any way they could, since they were trying to oust the Ottomans.

After the war, only 36 houses were suit for living or accommodating institutions. The rest of the city fell into total disrepair yet again, though Yalta was quickly rebuilt and became a very popular resort city for the élites. Its lovely climate also made it a prime location for health spas.

Tsar Aleksandr III ordered the construction of a new palace, Massandra, nearby. It was completed in 1889. Another nearby palace, Livadiya, was greatly expanded by his inept son Nicholas II. Many other nobles, extended members of the Imperial Family, and rich people also built grand estates in the vicinity.

Lev Nikolayevich Tolstoy and Anton Pavlovich Chekhov spent many summers in Yalta. Chekhov built the White Dacha in 1898 and lived there until 1902. His story “Lady with Lapdog” is set in Yalta. Today the dacha is a house museum.

Yalta was enhanced by the construction of a new pier (completed in 1903), a lighthouse, a renovated embankment, sewers, and a new water supply system. Schools also arrived in Yalta, and industry flourished. However, there was only a small hospital. 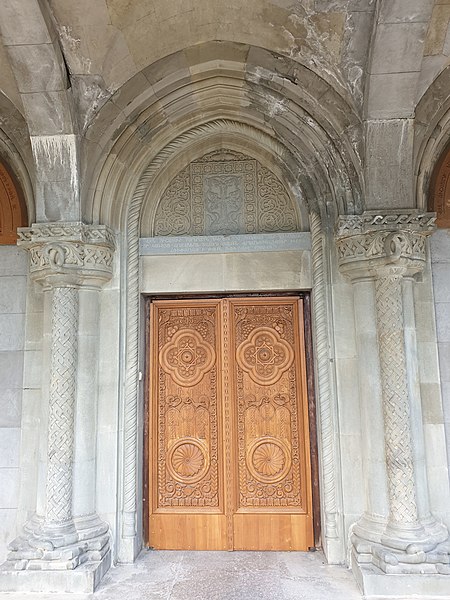 Yalta suffered greatly during the Red Terror of the Russian Civil War (1917–21), when many White Russians fled to the Crimea to wait for evacuation ships. The city was renamed Krasnoarmeysk in 1921, but the old name was restored a year later.

Though life was difficult after so many years of war, famine, hyperinflation, poverty, and disease, Soviet authorities sent vast amounts of food (even chocolate and caviar!) to Yalta sanitaria. By the early 1940s, there were 108 health spas where 120,000 people received treatment.

Yalta was occupied by the Germans during WWII, and the entire Jewish community of 4,500 were murdered near Massandra in late 1941. Thousands of other residents were also tortured and shot.

In February 1945, Livadiya Palace was the site of a conference regarding the postwar reorganization of Europe.

Yalta was rebuilt after the war, and remains a popular resort and beach city today.