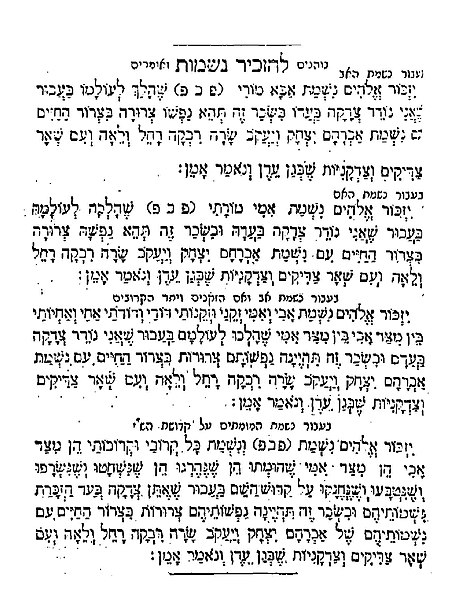 Yizkor (Remembrance) is a brief prayer service held during Yom Kippur, Shemini Atzeret (the holiday right after Sukkot, featuring the prayer for rain), the last day of Pesach, and the second day of Shavuot. Though the tradition is to recite Yizkor with a minyan (quorum of ten), one may recite Yizkor on one’s own if the need arises.

Custom holds that Yizkor isn’t recited during the first year of mourning, when one is still saying Kaddish. However, like all minhagim (customs), it’s not binding law. The Sephardim traditionally don’t have Yizkor, though in its place, they have Hashkabóth, prayers recited on Yom Kippur for all those who’ve died during the past year.

An old Ashkenazic superstition holds that anyone with two living parents leave the synagogue till Yizkor is over, for fear of the evil eye befalling one’s parents. When I’ve been by a very traditional shul for a holiday with Yizkor, I’ve had to do this too, though I always stay when I’m by a Conservative shul. There’s absolutely no halachic requirement or law dictating this. It’s just yet another Ashkenazic superstition, and makes me glad I didn’t grow up like that.

When I began living a Jewish life at age 18, I was free to choose the customs that most spoke to me, and those customs were Sephardic. Sephardim have always tended to be more lenient and rational, instead of elevating superstitious customs into quasi-law.

Parents aren’t the only people we mourn. I always say Yizkor for my grandparents, my uncle, my great-grandmother Alice, my favourite writer (Aleksandr Isayevich Solzhenitsyn), George Harrison (whom I consider my spiritual mentor), and several other people as the time allows. I always feel so cheated when I’m by a super-traditional shul that dictates one only say Yizkor for a parent.

A modern Yizkor service often includes poems, prayers, and additional readings about Death, mourning, and our martyrs, as well as the El Malei Rachamim prayer. Many shuls now have two versions of El Malei Rachamim, the traditional prayer and a modern one for the victims of the Shoah. There’s also a third version, for IDF soldiers.

My characters participate in a Yizkor service for the first time on Yom Kippur 1945, in Dohány Utca Synagogue. There’s no mass exodus as usual, since almost every congregant has lost at least one parent. As Mrs. Goldmark says, that superstition robs people of the chance to lovingly remember other loved ones. To save time, they include all the names together, instead of making separate prayers for each.

May God remember the soul of my [relationship to the mourner], [Name], who has gone to his/her eternal home. I promise, without making a vow, to honor his/her memory with charity and good deeds in his/her name. In this merit, may his/her soul be bound up with the bonds of life, together with the souls of Avraham, Yitzchak, Ya’akov, Sarah, Rivkah, Rachel, and Leah, and the other righteous people in Gan Eden, and let us say, Amein.