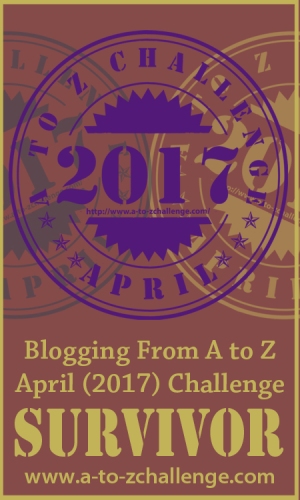 This was my sixth year participating in the A to Z Challenge, and my fourth year doing it with two blogs. I wrote all of my main blog posts last August and September, except for X and Z, which I wrote this January. My secondary blog posts were written in March.

The final letters I decided on topics for were L, R, X, and Z. Topics I considered but discarded included Bajcsy-Zsilinszky Hospital, Újszász, Xylotymbou, Rue des Pyrénées, Rue de Rivoli, and the Louvre.

I spent time writing a comment on the T day, respectfully and calmly explaining why The Boy in the Striped Pyjamas is an ahistorical slap in the face, and not highly regarded by the Jewish community or historical fiction community. As of now, it’s still lost in moderation, and a lot of this blogger’s posts don’t have any other comments either.

If you’re going to do moderation, at least read and approve comments within a day! I’m highly unlikely to return to a blog where comments don’t show up until days or weeks have passed, if ever.

Lack of hyperlinking. A LOT of people just left their URLs in the daily link-up posts. While it doesn’t take hours to copy and paste it into a new tab or window, it’s still not as instantaneous as HTML coding it into a hyperlink.

The lack of a master list was a bit cumbersome. While there were certainly issues with the list, I liked how it contained all the blogs in one place. It took more time to trawl through the comments section of each daily post. The extra space taken up by each comment could’ve been used for several additional links under the old system.

I’m a big fan of time and motion study, pioneered by Frederick Winslow Taylor and Frank and Lillian Gilbreth. It conserves the amount of time and work motions used to perform tasks. Sure, it didn’t take that much longer to scroll through 26 different comment sections, open each link or C&P each URL into a new tab, and link up myself, but the time spent doing that could’ve been used towards visiting a few more blogs each day. Over 26 days, those additional minutes really add up.

I also liked having the master list so I could start going through it right after sign-ups started. I began by visiting those closest to me, and got to know a lot of new blogs in advance. Throughout April, I became familiar with who was where in the list, and knew which links I’d visited or hadn’t explored yet by their hyperlink color. It was also a helpful reference for catching up in the months after the Challenge.

If there won’t be a master list from now on, a happy medium solution would be a service like Inlinkz. Some of the weekly bloghops I’ve participated in use that or a similar linking service. All you have to do is refresh it to see newer additions.

I do feel like the lack of a master list hurt those of us who weren’t early birds. We don’t all have the same sleep, work, or school schedule, or might not be able to get on a computer until late in the day, after almost everyone has already passed through. With a master list, we could peruse it at our leisure, and other bloggers would’ve found us more easily.