Released 22 January 1927, The Kid Brother was the great Harold Lloyd’s penultimate silent, and possibly my favorite of his films after only his silent swan song Speedy (1928). It’s got heart, soul, warmth, emotion, comedic timing, character development, story development, ingenious gags, everything. It’s also a beautiful film equivalent of a Bildungsroman, a growing-up story.

It’s based on the excellent Tol’able David (1921), starring the handsome Richard Barthelmess, and also a remake of Hal Roach’s The White Sheep (1924), starring the rather forgettable Glenn Tryon.

Harold’s father, Sheriff Jim Hickory, and his two big brothers Leo and Olin have made their name famous throughout the county, but they’ve always figured Harold of no accord. Though he was 33 at the time of filming, he has a suitably boyish look that makes him believable as a kid brother. He’s also not nearly as tall and strapping as the other three.

The Hickorys’ longtime enemies are the Hoopers. Son Hank in particular has hated Harold since Harold sold him a dozen doorknobs as eggs in the dark. Harold uses this feud to his advantage when there’s a mishap with the laundry line.

While Harold is alternately running away from Hank and retrieving laundry, he meets Mary Powers. Mary’s dad recently died, leaving her with a travelling medicine show. She’s not happy about having to continue the business, but the show must go on.

Mary believes Harold is one of the important Hickorys, and he doesn’t enlighten her. He likes feeling important, since he’s not treated like anyone special at home.

Mary is played by Jobyna Ralston, Harold’s leading lady since 1923. She always brings out the best in him. Bittersweetly, this was their final film together.

Harold and Mary make a date to go to the opening of a new dam, and when Harold gets home, his father and brothers begin discussing this dam. They leave Harold out of their discussion, but they let him sign the document.

Harold tries to go to their meeting about the dam, but he’s left at home, since that meeting’s no place for boys.

With the house to himself, he dresses up in his father’s sheriff outfit, and when he steps outside, he’s mistaken for the real sheriff by the medicine show quacks. He’s compelled into signing a document permitting the show to appear in town.

Interestingly, Harold writes right-handed both of the times he writes in this film. Though he lost the first two fingers on his right hand in 1919 and had to learn left-handedness, he also was able to write right-handed. Now that’s talent, not only learning a different handedness, but also learning how to write with a hand that only has three fingers!

Harold’s dad is quite upset to learn the medicine show is playing, and that Harold impersonated him. Instead of punishing Harold outright, his dad sends him down to break it up, “[s]eeing as you seem to be taking over the duties as sheriff.” 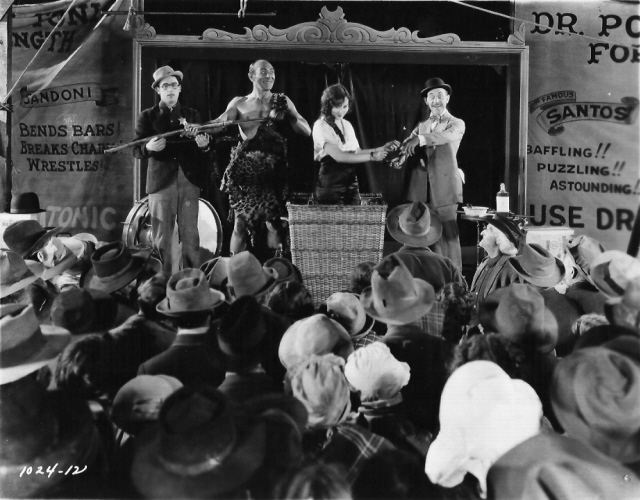 Things go from bad to worse, as Harold is made into the show’s entertainment and eventually handcuffed to a swinging bar. His dad and brothers come by as he’s trying to free himself, and Harold ends up setting the whole show on fire. In the mêlée that follows, he gets locked into a wicker hamper.

Mary eventually frees him, and since there’s a rainstorm, Harold takes her to his house for shelter. Her new guardians later show up to take her home, seeing as it’s not decent for her to stay in a house without womenfolk.

As Harold and Mary are on their way to the dam celebration next morning, they discover the money to build the dam has been stolen. Harold’s father is accused, and rightly comes to the conclusion it must’ve been the medicine show goons. Detained as a suspect, he sends his older sons to search. Mary is also held as a suspect.

Harold is tossed into a rowboat and pushed out to sea when he tries to defend Mary. He winds up by a boat called The Black Ghost, and the medicine show monkey tosses down incriminating evidence. Now it’s up to Harold to get on that boat, find the money, bring the villains to justice, and clear his father’s name. If he can do so, he’ll finally prove his worth as a real Hickory.

4 thoughts on “A beautiful Bildungsroman on film”