Electrotherapy was used as a treatment for hemophilia in the era before breakthrough drugs slowly made the average lifespan a little longer and offered hope during attacks which were often fatal in previous generations. This isn’t to be confused with electroshock “therapy,” since electrotherapy isn’t really supposed to hurt. It’s been described as more of a tickle or warming sensation.

Unhappily taking a therapeutic mudbath in the Crimea

For obvious reasons, I haven’t been able to find any pictures of Aleksey’s Fohn apparatus. It’s possible there were pictures, but the Bolsheviks destroyed a lot of the Imperial Family’s pictures, representing thousands of rolls of films. In any case, the family took the Fohn apparatus into exile in Siberia. This device got a lot of use after Aleksey’s injury at Tobolsk. It was applied to his joints and muscles, to prevent atrophying during long periods of immobility. It also kept the blood circulating.

Aleksey was only about 15 years away from the first breakthrough drugs. If he’d continued being lucky and bouncing back from the jaws of Death, and had either been rescued or never fallen into Bolshevik hands, it’s entirely plausible to believe he could’ve survived longer than just his early twenties. 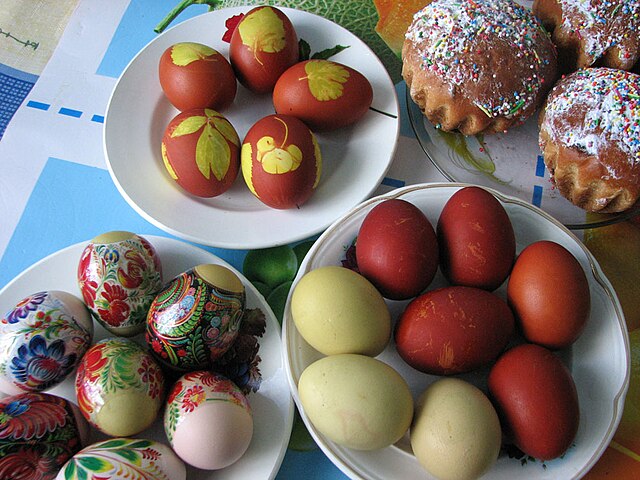 Traditional Orthodox Christians have a lot of fasts and fasting seasons, and Great Lent is the strictest of all. During Maslenitsa, meat is already off-limits, and this is the final week to eat dairy, eggs, fish, oil, and wine. The trademark food of Maslenitsa is bliny, small, thin, dessert pancakes made with lots of butter, eggs. and milk.

In addition to beautiful, bright, ornately-decorated Easter eggs, the Imperial Family also commissioned Fabergé eggs from 1885–1917 (excepting 1904 and 1905). There were eggs planned for 1918, but sadly never delivered. The first egg, the Jeweled Hen Egg, was given to Empress Mariya Fyodorovna by Tsar Aleksandr III, and contained three surprises: a golden yolk, a gold hen, and a diamond replica of the Imperial crown, with a suspended ruby. The Empress loved it so much, she received an egg every Easter until the end of the dynasty. Nicholas II continued the tradition after he assumed power, and had an egg made for his wife as well as his mother.

Each egg had at least one surprise, some revealed through pushing a tiny button. They were named after their theme, like Bouquet of Lilies Clock, Gatchina Palace, Shtandart Yacht, Aleksandr Palace, and Napoléonic (celebrating the Battle of Borodino’s centenary). During the Great War, the eggs were much more downscale, and reflected Red Cross and military themes. Sadly, some of the eggs are lost.

Shortly before midnight on Easter Eve, services begin in an almost completely darkened church, and the congregation later proceeds thrice around the church, all carrying candles. When they return to church, all the votive candles are lit by a special spark, the ikonostasis doors are opened, and the priest (or Metropolitan) has changed his dour black robes for silver and white, embroidered with tiny gemstones sparkling in all the candlelight.

Easter kulichi for sale in Kyiv

The Lenten fast is broken with a smorgasbord of all the foods which were forbidden over the last seven weeks. This includes special Easter foods, like kulich, Paskha, babka, and, of course, all those beautiful Easter eggs.

In my alternative history, Aleksey is forbidden from keeping all the Orthodox fasts in the hopes of preserving his life and regaining as much strength as possible. On his first orphaned Easter, Grand Duke Mikhail gives him a Fabergé egg with the surprises of a ruby heart and a miniature picture of his parents, framed by diamonds, with their names and dates lived engraved in silver on the back.

11 thoughts on “Electrotherapy and Easter”