While I still wouldn’t mind having some books traditionally published, so long as the contract were fair and I regained a lot of creative control, I’m constantly glad I chose indie publication in 2014 and quit actively trying for an agent. Maybe in future that’ll be something I pursue again, but for now, I want no part of the institutional wokeness pervading the industry.

While it’s good to keep an open mind re: suggestions from crit partners or betas and not be unbreakably welded to every last word as you originally wrote it, you also need to believe in your own creative vision. When you rush to make every single change suggested, your book is written by committee, and no one wants to read that. 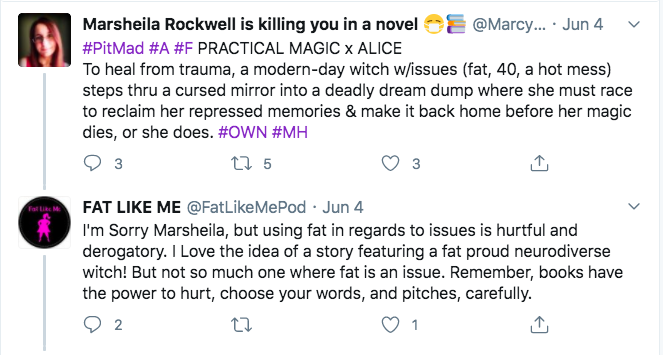 I hope Marsheila didn’t break her back from bending over so quickly, since when she next pitched this book, her MC had become happily “plus-sized.” Which, you know, radically changes the entire character arc and possibly plot trajectory. All because someone in the “Obesity rocks!” cult threatened her with cancellation.

I was close to 220 pounds at the start of June 2017. I’ve since lost about 75 pounds, and I feel so much healthier. Being within spitting distance of morbid obesity is NOT awesome, fun, sexy, cool, fashionable, empowering, etc. I felt strange pains in my chest sometimes, had really bad hip pain from walking even short distances, and was embarrassed to see myself in photos.

How the bloody hell did the size acceptance movement go from “You don’t need to be a size 6 to be healthy and attractive” and “Being slightly overweight isn’t necessarily unhealthy” to “Being obese is awesome! Anyone who suggests you need to lose even one pound is a cruel, hateful, fat-shaming bigot! Oh, and if you proudly post photos of your weight loss journey, you’re self-hating and part of the problem.”?

Writers need to grow and maintain strong backbones. Every time someone obediently cries uncle after the latest struggle session and tearfully thanks Big Brother for stopping the beatings, the cancel culture mob becomes more emboldened in attacking new targets. Whereas if they hear the word “NO” very firmly and repeatedly, they start losing power and will hopefully melt like the snowflakes they are.

These writers, agents, editors, and publishers are in the wrong business if they only approve of certain ideas, themes, words, and subject matter, and think people should only write about characters exactly like themselves.

According to this loony lot, I have no business writing about any of the following:

The only characters left for me to write about are Jewish, Catholic, proletarian or lower-middle-class, American-born, late Gen X, female, New Yorkers, Pennsylvanians, Massachusettsans, Aspies, heterosexuals, and people of German, Italian, Slovak, Dutch, or British descent. (There are plenty of other bloodlines in my family tree, but those are the biggest percentage-wise.)

There’s something called research. No one pretends it takes the place of firsthand experience, but I’d much rather read, e.g., a Chinese hist-fic by a passionate white Sinophile than by a Chinese–American who was made to feel that’s the only thing s/he’s allowed to write about, despite initially pitching sci-fi.

If I began writing a Korean hist-fic, hard sci-fi, or high epic fantasy right now, my lack of passion and familiarity would show through in spades, and astute readers would quickly pick up on that disinterest as well.

I was absolutely thrilled when I finally found Irish ancestors in my family tree (from Antrim), but that didn’t suddenly make me equivalent to a fully-blooded Irishwoman who was socialized in that community. But I’ve long had love for the Irish, and felt deep parallels between the Irish and Jewish communities because of our similar histories.

Passion, research, and empathy matter more than happening to belong to a certain group. It always makes me sad to see a writer saying s/he felt compelled to remove a great, important character because Name either wasn’t persecuted enough, or s/he doesn’t belong to that group.

We also shouldn’t be afraid of edgy, controversial content. Literature isn’t meant to be milquetoast, G-rated, confirmation-biased, censored by the Woke Stasi. It’s a wide palette of ideas and characters. The books which challenge our pre-existing ideas most, whether we come to think differently or not, are more powerful than ones which don’t make us think beyond the box at all.