I’ve always had a major sweet tooth, and love writing scenes with ice-cream, candy, chocolate, sundaes, and baked goods. It’s particularly fun to research vintage candies and sweets, and to create characters with a sweet tooth. My Cinnimin has a particularly intense sweet tooth, and is frequently shown indulging it. Her habit of keeping a bag of candy under her bed and in her purse must’ve been influenced by Claudia in The Baby-Sitters’ Club.

Here are some of the vintage candy ads and dessert recipes I’ve collected, with accompanying excerpts.

Cinni bought the biggest container of popcorn, along with three chocolate egg creams, ten Goldenberg’s Peanut Chews, a giant rainbow-swirl lolly, and a large bag of Dubble Bubble.  Max and Harry got popcorn, egg creams, and a big bag of Tootsie Rolls.  Sparky could only look at all the wonderful candy and treats, imagining what they must taste like.  This might not be a grand movie palace like she’d gotten used to, but it was hardly some hole in the wall.

With the house all to themselves, mostly, Babs and Cinni lay on the living room davenport listening to the radio.  When lunchtime came, Babs went into the kitchen and made them sandwiches with peanut butter, hot fudge, caramel sauce, and marshmallow crème.  She set them on a tray, then added two extra-large glasses of fruit punch with lots of sugar stirred in.

“What are you doing home from school so early?” Mr. Filliard asked when he ran across Babs on her way back to the living room. “I thought I heard the radio in the background, but I assumed it was your mother or aunt, or even that kooky Jasper.”

“In that case, bring her some sweets.  I won’t hear of my pet child not having her every want catered to when she’s ill.” Mr. Filliard loaded up the tray with fudge, chocolate chip cookies, cherry pie, chocolate doughnuts, and strawberry danishes.

This is yours,” Barry said, extending a large basket. “I’ve never given mishloach manot to Gentiles before, but everyone in your family deserves one for being so good to us.  Without your father, we’d still be in Europe, with God knows what kind of future.”

Cinni returned the smile and eagerly took the basket.  She headed back to the davenport with it, and delightedly discovered oranges, hamentaschen, saltwater taffy, gumdrops, chocolate-covered peanuts, a bottle of grape pop, and five silver dollars.

“I packed that one just for you,” Barry said, smiling at her again. “I know what a sweet tooth you have.  You’d never be happy with the mishloach manot we made for your parents and siblings.” 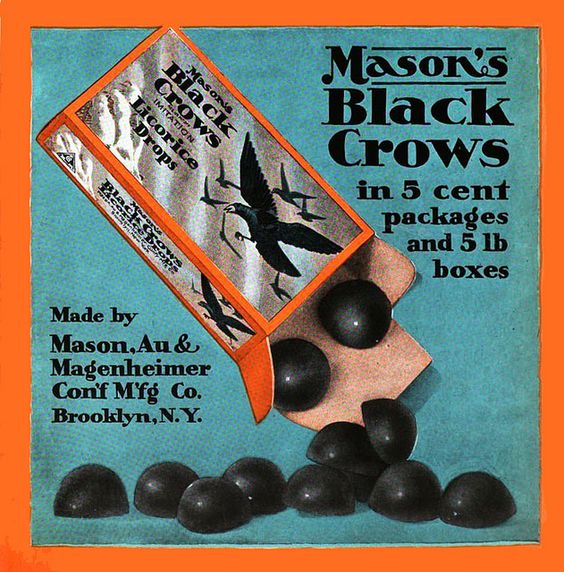 Sparky stood back as Cinni, Violet, Tina, and Babs rang the bell and held out their pillowcases.  The woman who answered the door bent down for a large pail of candy and gave each girl a 5th Avenue bar, 3 Musketeers, Tootsie Rolls, and Snickers bars.  Sparky was a little hungry when she saw all the candy they were getting just for putting on costumes and showing up at someone’s house.

Ivan comes home to laundry strung through the apartment, the smell of chicken dumpling soup, baby cries, two strangers in his living room, and his fiancée lying unresponsive on the davenport, a cold compress on her forehead.

“Papa, I’m very hungry,” Tatyana announces. “Did you buy me candy after you left work?  I didn’t eat any lunch.”

In a daze, Ivan opens his metal lunchpail and hands her two Goldenberg’s Peanut Chews, with the wrappers open for her convenience. “Can someone care to explain to me what in the world happened today?”

Yuriy turns into the first ice-cream parlor that appears and finds a green corner booth that almost matches his uniform.  He translates the menu for Inga, and she orders a sundae with chocolate ice-cream, hot fudge, cherries, and crushed candy bars, with an orange egg cream.  Yuriy orders a humbler strawberry ice-cream float.

Inside the theatre, Vsevolod gets Nadezhda a chocolate ice-cream soda with a cherry and whipped cream on top, and gets himself buttered, salted popcorn.  He wishes he could try all the candy on display to make up for twenty-six years of subsisting on reindeer meat, root vegetables, winter berries, and bread.