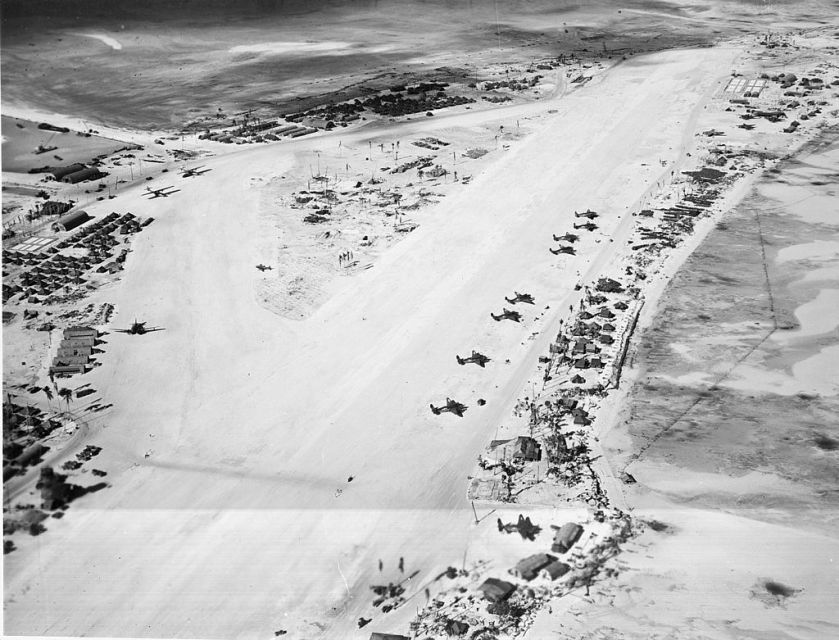 The Battle of Tarawa was fought from 20–23 November 1943 at Tarawa Atoll in the Gilbert Islands. It was part of Operation Galvanic, the U.S. invasion of the Gilberts. This was the first U.S. offensive in the crucial central Pacific region, and the first time U.S. forces faced significant opposition to an amphibious landing.

In comparison to previous landings, this time the Japanese put up a major fight. There were 18,000 Marines and 17,000 soldiers from the Army’s 27th Infantry Division against 5,000 Japanese Naval defenders. Within 76 hours, the U.S. losses were as high as those from the six months of the Guadalcanal Campaign.

The Japanese spent almost a year fortifying Tarawa, right up till the day of the invasion. Rear Admiral Keiji Shibazaki encouraged his troops by saying, “It would take one million men one hundred years” to take Tarawa.

The Marines made a disastrously miscalculated decision about landing time, rejecting the advice of a New Zealand liaison officer who tried to tell them the tide was all wrong.

The Marines found themselves in neap tide. The water wasn’t high enough for their Higgins boats to clear the reef. Only LVT Alligators were able to clear it.

The Marines had to go the rest of the way on foot through the water. During the lull in the Naval bombardment, the surviving Japanese had gotten back into position and now began firing without stop. Many Marines were dead before they reached shore.

Many LVTs were also taken out of battle. Their hulls weren’t armored, thus making them vulnerable.

With the LVTs unable to clear the sea wall, the first landing wave of Marines were stranded. Most of the remaining LVTs who tried to rescue them were too badly damaged to stay afloat. These Marines remained stuck on the reef 500 yards from shore.

By the end of the first day, half of the LVTs were unusable. 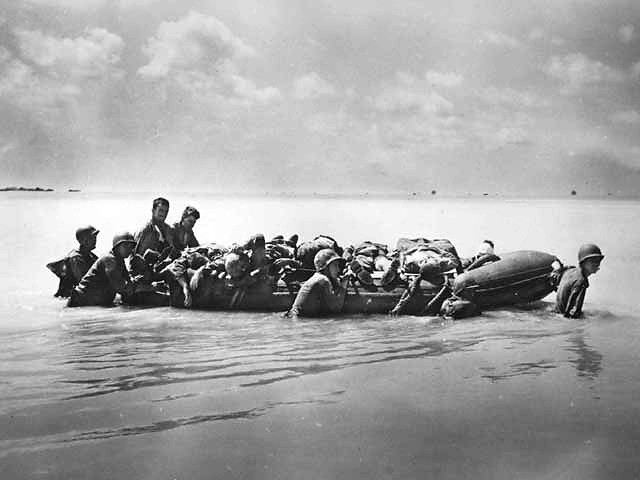 One disaster followed another over the next few days. The Marines who got past the first deadly volley and the underwater tank traps and mines had to contend with wet, heavy, slippery sand, log barricades, and barbed wire traps.

Commanding officer, Col. David Shoup, took schrapnel in the leg and a grazing wound on the neck, but continued leading his men.

The first afternoon, Admiral Shibazaki and his forces were caught walking around in the open. The Marine who spied them communicated with the Navy, who launched a barrage of shells from two nearby destroyers. This prevented another brutal wave of carnage overnight. 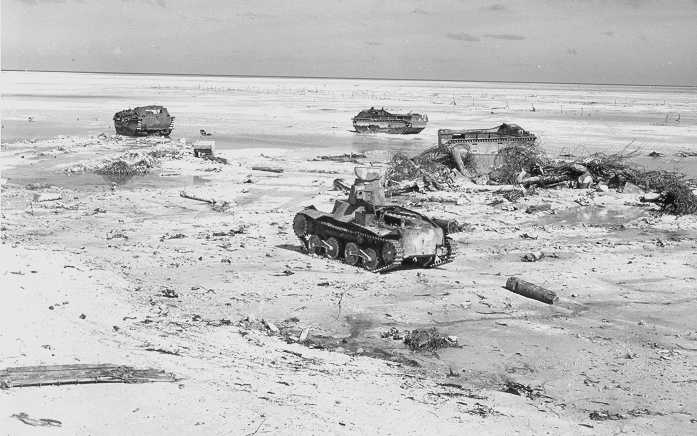 Many Marines in the landing wave on the second morning were also shot down, but there was more Naval reinforcement. High casualties continued, but U.S. forces began gaining a toehold of that tiny atoll.

Some Marines moved to Bairiki, the next islet over, where more Japanese were amassing across the sandbars.

Col. Shoup was relieved by Col. Merritt A. Edson, the 2nd Marines’ Chief of Staff, but stayed on as an assistant.

After 76 hours of intense fighting and much bloodshed, Tarawa was cleared of Japanese. Only one Japanese officer and 16 enlisted men surrendered. All the others were either killed or chose suicide. Afterwards, the surviving Marines island-hopped to root out any remaining resistance in the vicinity.

During this operation, a force of 175 Japanese Naval infantry on Buariki launched one last stand on 27 November. This battle was over by the end of the day, and all the Gilberts were in U.S. hands.

The heavy U.S. casualties and botched landing sparked much outcry and public protests.

My characters Patya Siyanchuk and Rodya Duranichev are with the 6th Regiment of the 2nd Marine Division at Tarawa. Though Rodya is terrified the entire time, and knows he’s a very unlikely Marine, he holds his own well in battle.

While they’re helping to bury the dead afterwards, Rodya finds a dead Japanese who’s not as disfigured or putrid as the other corpses. He takes three beckoning cats, an omamori, a photograph, and a letter as souvenirs.

These personal objects are meant to show the common humanity of the other side.

The Battle of Saipan lasted from 15 June–9 July 1944 on the island of Saipan, part of the Marianas. It was nicknamed Death Valley, Hell’s Pocket, and Purple Heart Ridge due to the intense fighting and high casualties.

Over the three weeks and three days of battle, 71,000 Marines and members of the Army’s 27th Infantry Division faced off against 32,000 soldiers of the Imperial Japanese Army. Navajo code-talkers prevented disasters during several key moments. 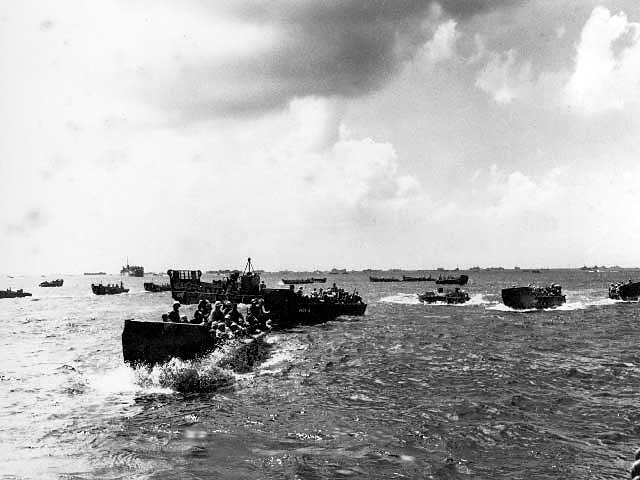 A preliminary bombardment began 13 June, from fifteen battleships. The landings began at 7:00 AM on 15 June. Unlike the disastrous landing by Tarawa in November 1943, this time there was no neap tide stranding Marines on a reef or forcing them to go the rest of the way on foot through the water.

Some Marines, however, landed at the wrong place, due to the LVT drivers not heeding their pleas to bear to the right. The drivers had swerved north to avoid a violent strafing attack, but that didn’t take them to their planned disembarkation point.

About twenty LVTs were destroyed, and casualties were high as Marines encountered traps of barbed wire, trenches, mines, pillboxes, and combatants hiding in the underbrush. Prior to the landing, they were issued pamphlets explaining what to expect, and the signs of booby traps and mines. 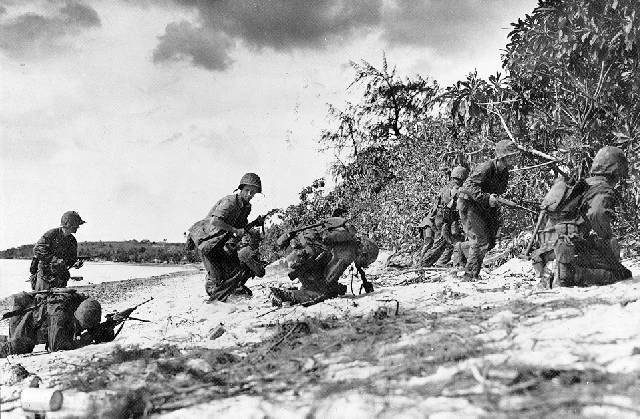 During that brutal first day, a mortar landed on the 2nd Regiment’s command post and wounded their new commander, Major Howard Rice, who’d just taken over from the also-wounded Lt. Col. Raymond Murray.

By the first nightfall, the 2nd and 4th Marines had taken a beachhead six miles (ten kilometers) wide and 0.5 miles (one kilometer) deep. The Japanese attacked again that night, but the Marines put up an intense counterattack and repulsed them.

The bugler who’d sounded the alarm of the night attack was killed by a bullet going up his instrument’s windpipe.

The Imperial Japanese Navy bit off more than they could chew by deciding to attack the nearby U.S. Navy ships too. This new, independent Battle of the Philippine Sea crushed much of their naval strength.

Having lost all hope of reinforcements and resupply, the cards were decisively cast for U.S. victory, but the Japanese were determined to fight to the last man, woman, and child.

After Lt. Gen. Yoshitsugu Saito ordered a suicidal banzai charge, it became impossible for the Marines to distinguish civilians from soldiers.

At dawn on 7 July, the banzai charge began. Behind the remaining 3,000 able-bodied soldiers were the wounded. This attack almost destroyed the 1st and 2nd Battalions of the 105th Infantry Regiment, but they refused to retreat. Many other Marines also fought back.

My characters Patya Siyanchuk and Rodya Duranichev serve with the 6th Marine Regiment of the 2nd Marine Division at Saipan. Once again, Rodya is terrified, but determined to prove himself as a real Marine who doesn’t need his best friend constantly protecting him.

The second morning, Rodya investigates a suspicious noise, and ends up attacked by a Japanese. Patya has to come to his rescue yet again, and Rodya feels like an unmanly failure.

On their way to the medic, Patya is wounded by a rifle grenade. Now it’s up to Rodya to find the attackers and prove his mettle as a Marine, in spite of a seriously wounded shoulder.