The Semicircular Hall is one of the best-known gala halls and rooms of the Aleksandr Palace. Over the years, it’s remained just as Giacomo Quarenghi designed it, with the exception of replacing the Russian stoves on either side of the entrance with marble fireplaces. The walls are of white marble, and the apse’s central doors look out onto a terrace overlooking the palace’s gardens. The hall itself opens through broad, columned arches into the Billiard and Portrait Halls.

The Semicircular Hall was used for balls, gala dinners, receptions, and other special events. Because the Aleksandr Palace was meant as a summer palace, the doors to the gardens and the palace’s front doors were open when the hall was used, revealing quite a beautiful vista. This immense, airy hall could seat up to 400 or 500 people during one of its famously large gala dinners or social events.

During the final years of the dynasty, the Semicircular Hall was also used to show films and slideshows, usually on Saturday nights. This hall was sadly the last place the Imperial Family saw before their exile to Tobolsk. On Aleksey’s 13th birthday, 30 July/12 August 1917, they stayed up all night and day waiting in the hall with their luggage, until finally the train was cleared and the order was given to move out early the next morning. 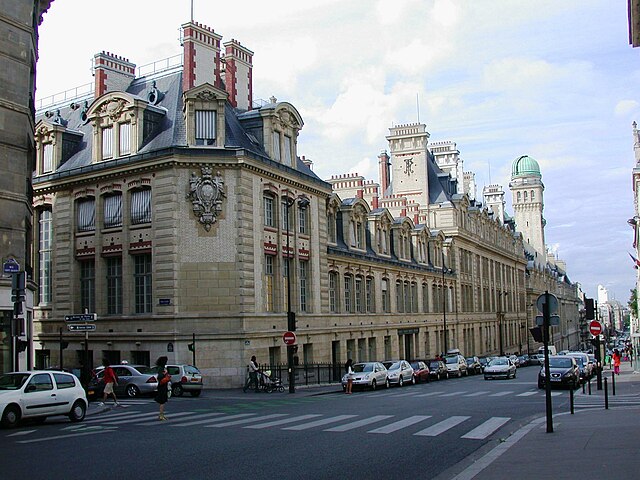 The Sorbonne, as seen from Rue Saint-Jacques, Copyright (WT-shared) Riggwelter

Le Collège de Sorbonne is the historical home of the University of Paris, which today houses several higher educational institutes. It was founded in 1257 as a theological college, and soon rose to become France’s most distinguished theological institute. In 1792, during the French Revolution, it was closed, but then reopened by Napoléon in 1808. It never regained its former prestige, though it continued operating till 1882. A new building was constructed from 1884–89.

In my alternative history, Aleksey attends the Sorbonne from 1922–26, on the suggestion of Grand Duke Mikhail, his uncle and Regent. He’s the first Tsar to receive a university education instead of immediately coming to the throne as soon as he’s of age. Without a well-rounded education and real-world experience outside of palace gates, his desire to be a good, reforming Tsar won’t automatically translate into successful actions. During his time in Paris, he lives in the Belleville neighbourhood of the Twentieth Arrondissement, a very working-class area with many immigrants.

St. Serafim of Sarov is one of the most belovèd Russian saints and mystics. He was born in Kursk, and at age 19 joined a monastery in Sarov. In 1786, he took his final vows and received the name Serafim. Shortly after becoming a monastic priest, he adopted a hermitic lifestyle. He was attacked by bandits while chopping wood one day, beaten with his own axe, and left for dead. Miraculously, he survived, but was left with a hunchback.

He became a confessor in 1815, and many miracles and prophecies were attributed to him. Hundreds of pilgrims came to him every single day. Though he was very tough on himself, given his ascetic lifestyle, he greeted everyone joyously, treated them very kindly and gently, and called them “My joy.” He died while praying before the beautiful Umileniye ikon, believed to show Mary at the moment of Annunciation. This is one of those rare Orthodox Marian ikons depicting Mary alone. 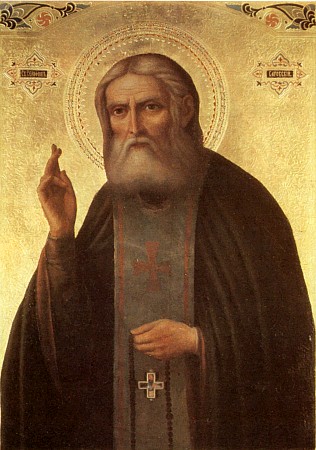 In 1903, the year he was canonised, Tsar Nicholas II and Empress Aleksandra travelled to the Sarov monastery. Since so many miracles had been attributed to him over the years, they felt he might finally answer their desperate prayers for a son.

The Umileniye (Tenderness) Ikon, of which St. Serafim was very fond, and before which Nicholas and Aleksandra might’ve prayed in 1903. A replica of this ikon was also in the Imperial Family’s private chapel in their belovèd Fyodorovskaya Cathedral.

Obviously, their prayers were finally answered, but not in the way they’d expected. Their prayer was just answered differently, more challengingly. They still got a beautiful little boy who constantly bounced back from the jaws of Death and grew into a sensitive, compassionate young man who promised to be a great Tsar.

Welcome back to Weekend Writing Warriors and Snippet Sunday, weekly Sunday hops where writers share 8–10 sentences from a book or WIP. So I don’t give away everything, I’m skipping a number of pages past the last snippet from my alternative history. Arkadiya has considered the matter and accepted Aleksey’s proposal, though she still refuses to call him by a nickname or use ty, the familiar form of “you.” He’s told her the truth about his hemophilia, though she doesn’t yet understand what it really means.

Arkadiya has been presented with a short-sleeved yellow taffeta gown and told His Majesty insists she wear this dress for their engagement photographs, in her best color and a modern style. Very reluctantly, she’s shed her usual long sleeves, but she’s not revealing the secret about her arms just yet.

Arkadiya strode into the Semicircular Hall, her hands clasped behind her back.  Her betrothed, several servants, and a photographer stood near the central doors of the apse, which overlooked a terrace and the beautiful Aleksandr Gardens.  The garden wasn’t cultivated this far into October, but it was still a beautiful view.  A turquoise divan had been set up near the doors, and was flanked by large white urns of multi-colored orchids.

“Perhaps His Majesty should sit and Her Highness should stand beside him,” the photographer dictated. “His Majesty is so tall, and if he’s the one standing, or he’s standing next to Her Highness, the height difference will look exaggerated.  Your Highness, would you like to put your arm around His Majesty and stand very close to him?  I still can’t believe you’re seven years his senior instead of a few years younger.”

“You really don’t need to call me by an honorific,” Arkadiya tried to protest. “I’m not used to being addressed like an actual princess.”

One of the official engagement photos of Aleksey’s paternal grandmother, Princess Dagmar of Denmark, and her first betrothed, Tsesarevich Nikolay Aleksandrovich. Russian history would’ve been so much different if the reform-minded Nixa hadn’t died of meningitis at 21, since both the reactionary Aleksandr III and the disastrous Nicholas II would’ve been kept off the throne.

How did those of you who did NaNo make out? I got my win on Day 23 again, and had 71,040 words by the end (including the table of contents and the character list as far as characters introduced so far). My conservative guesstimate for the fourth volume with my Russian characters is 350K, so that’s just a drop in the bucket! I rewarded myself for my win with a navel piercing, something I’ve been wanting for a really long time.

Don’t believe the myth that only teenage girls with size six bodies get this piercing! My piercer (our area’s only APP-certified piercer) helped me to select a gorgeous curved barbell with purple opals, based on my signature colors and what looks good with my features. I now have ten piercings—three sets of earlobes, my left nostril, my left rook, my right conch, and my navel. My next piercing will be my left tragus, since 11 is my lucky number and I want #11 to be something special I don’t already have.