Since I’ve had no time to put together posts on any of the topics I’d planned since my near-entire focus became finishing my alternative history in time for its release and then prepping four of my five books for print editions, here’s another quick, easy-to-put-together post.

After the Ryurikovich and Romanov Dynasties, I think the Romanians are my favourite royals. Not only is Queen Marie one of my favouritest queens, but she had a Russian connection. Her mother was Tsar Aleksandr II’s daughter Mariya. Queen Marie’s youngest daughter Ileana is also one of my favourite princesses. She wasn’t the type who did little more with her life than sit around in royal residences looking pretty.

I love the Bulgarian Royal Family because Tsar Boris III is one of my heroes. He repeatedly risked his life and throne to save his kingdom’s 50,000-strong Jewish community from the Nazis. I absolutely feel there’s merit in the theory he was given a slow-working poison at his final stormy meeting with Hitler, instead of having a heart attack. 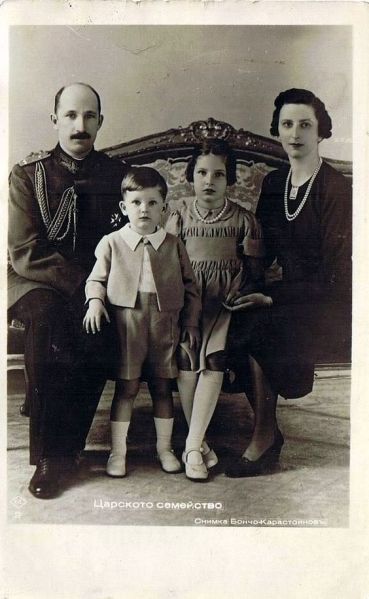 Tsar Boris, Tsaritsa Ioanna (née Princess Giovanna of Italy), and their two kids Mariya Luiza and Simeon. The lattermost is the only living person who’s had the title Tsar. Simeon has never renounced his claim to the Bulgarian throne either. 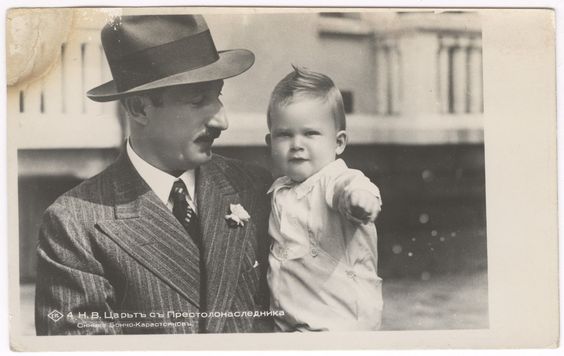 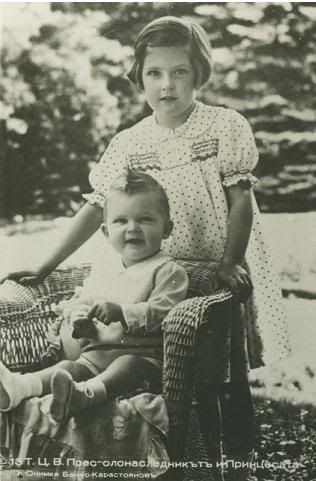 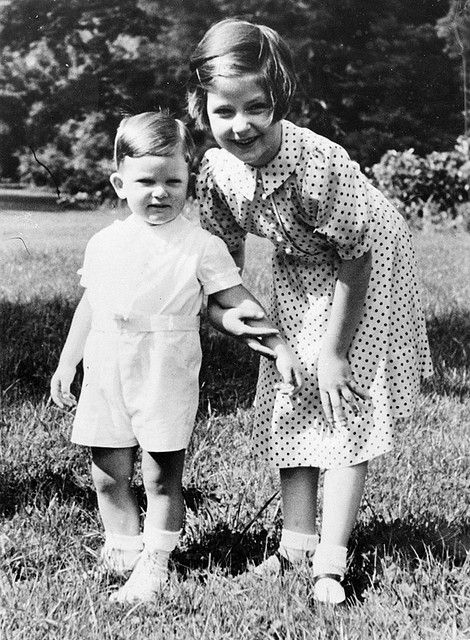 Mariya Luiza and Simeon. I love how little boys all wore short pants in this era. 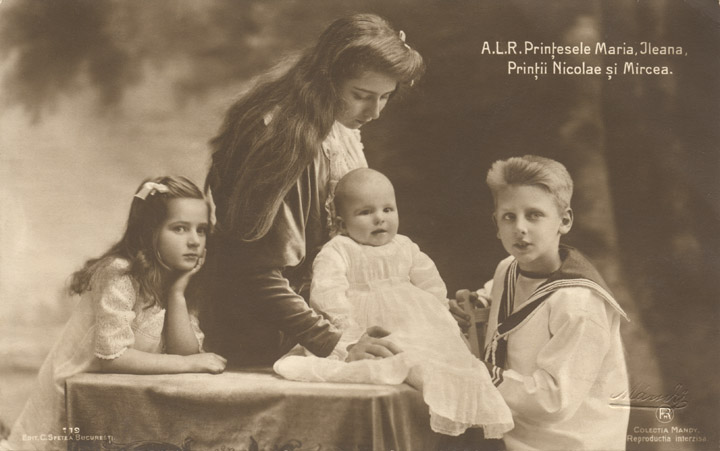 Four youngest children of Queen Marie. Ileana, on the far left, was very possibly fathered by Prince Barbu Ştirbey instead of King Ferdinand, and Mircea, the baby, was almost certainly fathered by Ştirbey. 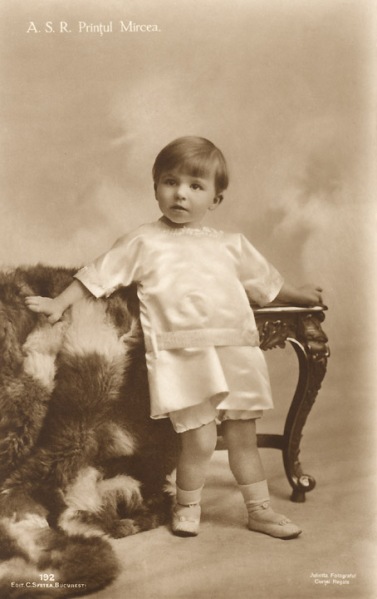 Sadly, little Prince Mircea died just two months shy of his fourth birthday, in 1916. One of the many strong clues suggesting his true paternity is the fact that Prince Ştirbey came to his sickbed and stayed through his death. 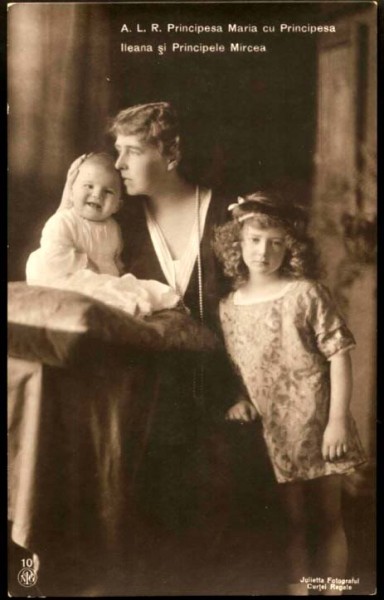 Cute little Mircea almost always smiled in his photos. Such a tragedy he was taken out of the world so young. 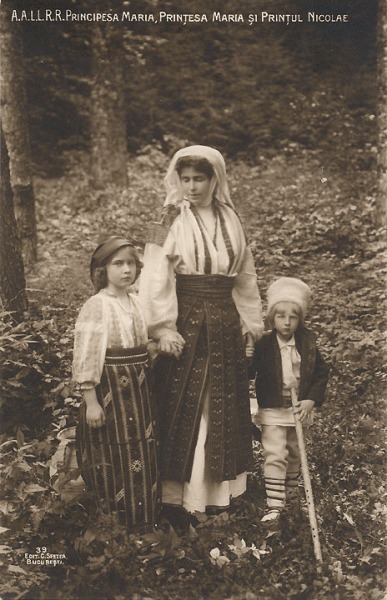 Queen Marie with her middle children Mignon and Nicky. 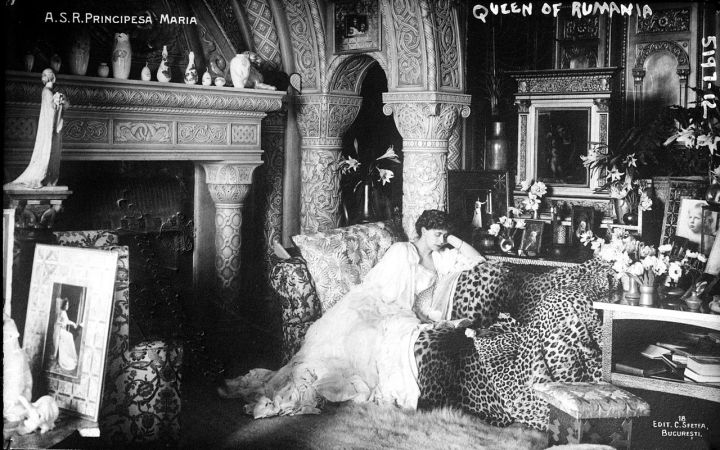 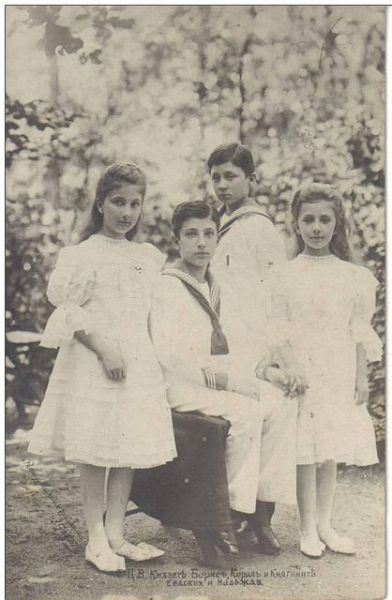 Tsar Boris and his siblings, Yevdokiya, Kiril, and Nadezhda. 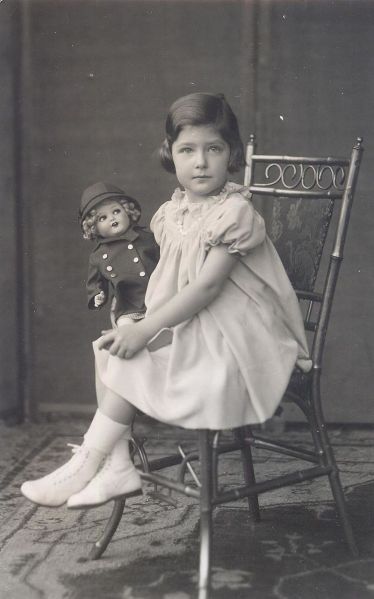 Mariya Luiza with a doll.

Here are a few of the other real people who appear as characters in my alternative history, whom I haven’t already featured. Not everyone is from the Russian Imperial Family! 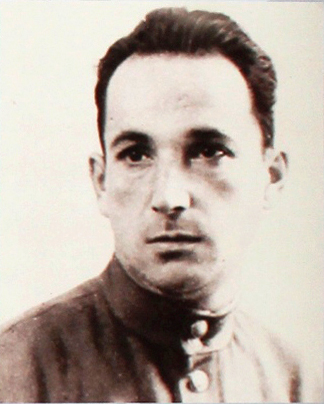 Captain Aleksandr Aronovich Pecherskiy (22 February 1909–19 January 1990) was born in Kremenchuk, Ukraine, and grew up in Rostov-na-Donu. He earned a diploma in literature and music, and worked as an accountant and manager of an amateur musicians’ school, and as an electrician at a train repair plant. He served in the army from 1931–33.

The day the war began, he was drafted as a junior lieutenant, and served with the 596th Howitzer Artillery Regiment. In autumn 1941, he saved his wounded commander from capture, but didn’t get any medals for his bravery.

He was captured in October 1941, and suffered with typhus for seven months. He and four other POWs escaped, but were recaptured that same day. They went to a penal camp and then a POW camp, where it was discovered he was circumcised. He admitted he was Jewish, knowing he’d be whipped for lying.

Severe punishments and several other POW camps followed. He ended up in Sobibór, where he organized and led the revolt and mass escape of 14 October 1943. After serving with two partisan groups, he reunited with the Red Army, and was promoted to Captain. He was wounded in Latvia in August 1944.

During the last years of Stalin’s reign, he lost his job, was briefly arrested, and was unable to find new employment. The Soviet government prevented him from testifying at several trials of Nazi war criminals abroad.

For his courage, he has received four medals (two posthumous), and many other awards and honors.

In my alternative history, Captain Pecherskiy and 50 other Jewish partisans, mostly escapees from camps and ghettoes, arrive at the Aleksandr Palace in September 1944 to petition Aleksey and Arkadiya to create all-Jewish regiments in the Imperial Russian Army. He becomes commander of an eponymous infantry regiment, and receives many medals and honors after the war. 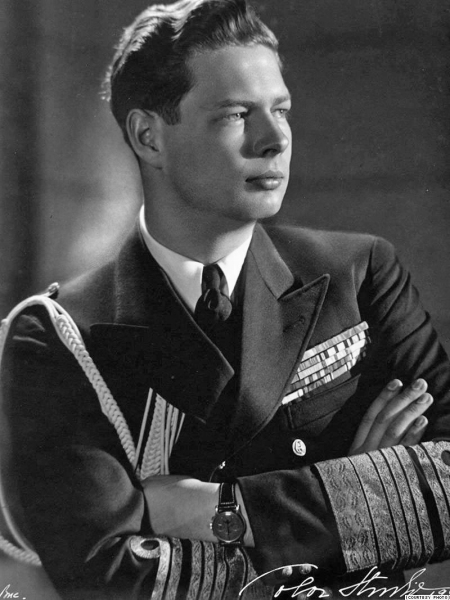 Soon after Mihai’s birth, his sleazy father was embroiled in yet another scandalous relationship, and renounced his claim to the throne. Mihai became king in 1927, after Ferdinand’s death, with a regency including his uncle Nicolae. 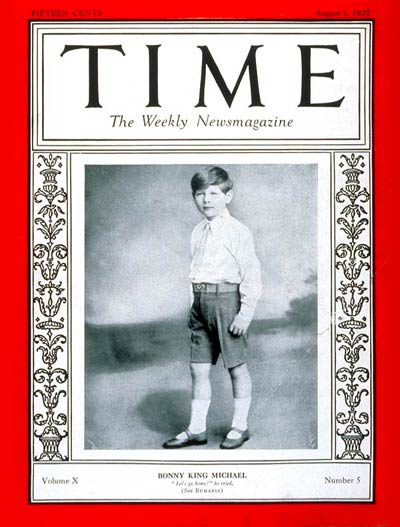 Carol returned to Romania in 1930, and refused to reconcile with his wife. He forced her out of the country and only let her see Mihai a few months a year, on his own terms. After Carol abdicated in September 1940, Mihai became king again.

Mihai frequently suffered bouts of depression, feeling he were too young and inexperienced to be king, and upset at being treated like a pathetic figurehead by the ruling fascists and Germans passing through. His mother provided teachers to shape him into a strong, active king, and urged him to depose the fascist Prime Minister Ion Antonescu.

She also made him to understand he had to take a stand against Jewish deportations, or risk going down in history as King Mihai the Wicked. He listened to his mother (who posthumously was honored by Yad Vashem as Righteous Among the Nations). 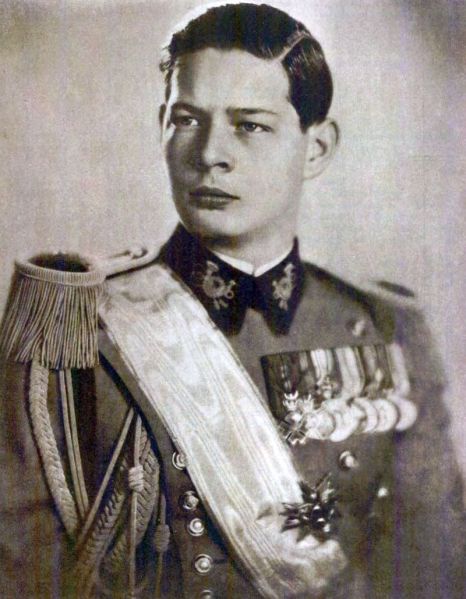 In June 1944, Mihai began secret talks with members of the opposition, to discuss overthrowing Antonescu. His successful coup in August turned Romania to the Allies and shortened the war by as much as six months. Sadly, the Soviets forced him to abdicate in December 1947.

In 1948, Mihai married Princess Anne of Bourbon-Parma, with whom he had five daughters and enjoyed 68 years of marriage.

In my alternative history, Mihai and Nicolae secretly come to Russia in June 1944 to discuss the planned defection and overthrow of Antonescu. He returns in August for the belated baptism of Aleksey and Arkadiya’s surprise fifth child Shura and their nephew Oleg. It means a lot to him that Aleksey, who also came into a throne at a very young age, says he believes in him. Good kings are gradually made, not instantly created.

These are a few more of the real people who feature in my alternative history, whom I haven’t already discussed. Writing about real people as characters can feel awkward and self-conscious at first, but it gets easier if one thinks of them as characters who just happen to have been real people. They’re not sacred cows. 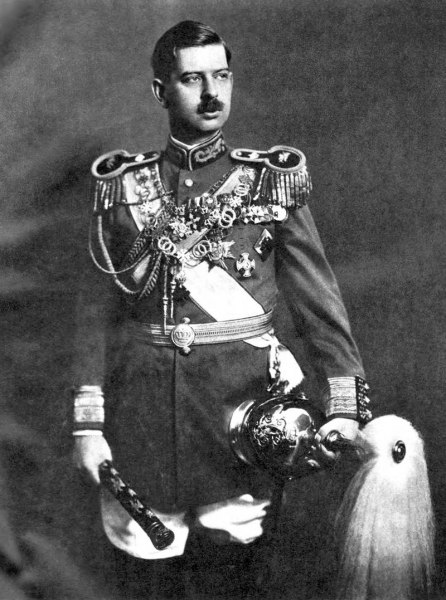 King Carol II of Romania (15 October 1893–4 April 1953), firstborn child of King Ferdinand and Queen Marie (one of my favouritest queens), ruled Romania from 8 June 1930–6 September 1940. Prior to that, he’d renounced his rights to the throne over his affair with commoner Magda Lupescu, who became his third wife.

Marie and Ferdinand (who was nearing the end of his life) set up a regency for Carol’s 5-year-old son Mihai. Then Carol decided he’d like to be king after all, and took the throne from his own son. This guy was a complete serpent’s tooth, megalomaniac, egomaniac, scumbag, lousy husband, dictator, fascist enabler, the works.

In my alternative history, Aleksey and his wife, Empress Arkadiya, visit Carol in late summer 1940 to negotiate the release and Russian resettlement of Romania’s half-million-strong Jewish community, along with the Romani and interred Polish nationals. They demand Bessarabia and northern Bukovina back as part of the deal, so they can protect even more of Europe’s Jewish community. 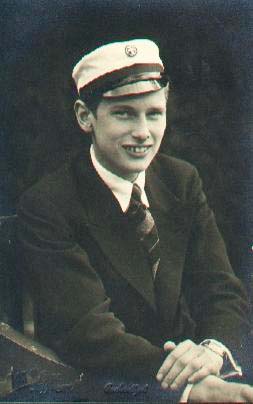 In 1938, Gorm entered Naval service, and became an officer in the Royal Life Guard. During the Nazi occupation, in 1943, he was among the sailors who escaped to Sweden with the Danish Brigade. They were part of the Danish Resistance. His mother, meanwhile, frequently hobnobbed with Nazis, and was a source of great shame to everyone else in the Danish Royal Family.

In real life, Gorm never married or had kids. 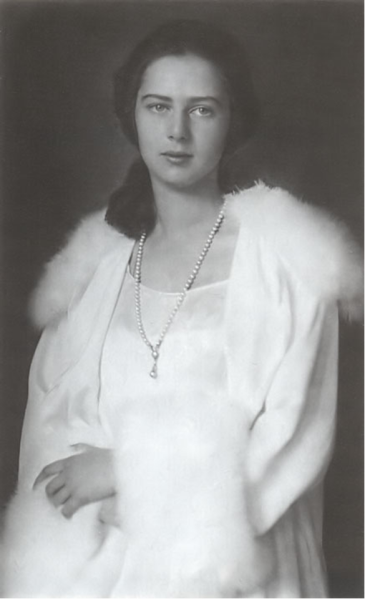 Princess Ileana of Romania (5 January 1909–21 January 1991), King Carol’s youngest sister. It’s widely suspected her father was Queen Marie’s lover Prince Barbu Ştirbey, not King Ferdinand. Ileana was very popular in Romania, and considered herself Romanian down to the very core of her soul. Prior to Carol forcing her out of the country, she lead Romania’s Girl Guides.

Carol, deeply jealous of her popularity, was desperate to get her out of the country, and encouraged her to marry Archduke Anton of Austria, Prince of Tuscany. He then claimed the people wouldn’t tolerate a Habsburg on their soil. Carol likewise refused to let her return home to give birth to her firstborn Stepan in her native land. (He also forced their brother Nicolae to leave Romania because of his morganatic marriage.)

During WWII, she was very active in nursing war wounded. In 1944, after her nephew King Mihai joined the Allies, she and her family returned to Romania. Following Mihai’s forced abdication at the end of 1947, they fled to the West. In 1961, she became a nun, and was tonsured as Mother Alexandra in 1967.

In my alternative history, Ileana is one of the princesses most strongly preferred for Aleksey, but his heart becomes set on morganatic princess Arkadiya. Ileana later appears at the meeting with Carol, where she chews him out about how he essentially tricked her into leaving the country she loves so dearly. Until the fascists in Romania are overthrown, Aleksey and Arkadiya host Ileana and her children in their palace.