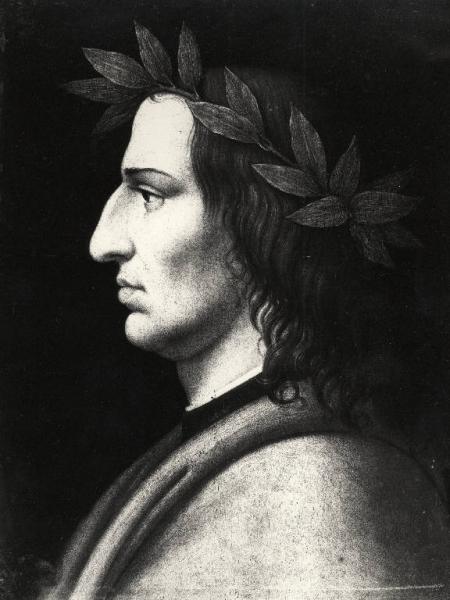 Publius Vergilius Maro was born in the village of Andes, near Mantua in Cisalpine Gaul (now northern Italy), on 15 October 70 BCE. His parents’ names have been lost to the ages, though his father’s family name may have been Vergilia, and his mother’s name Magia. Most modern scholars believe they were an equestrian, landowning family.

Virgil’s parents had enough money to give him a good education. He attended schools in Cremona, Naples, Rome, and Mediolanum (now Milan), starting at age five, and studied astronomy, medicine, and rhetoric. Because of his shyness and aloofness, his classmates nicknamed him Parthenias (maiden).

Virgil thought about pursuing a career in law and rhetoric, but ultimately decided to become a poet. According to legend, he began writing while at school in Naples. However, modern scholars believe the juvenile works attributed to him in Appendix Vergiliana were penned by many different authors, most of them not Virgil. 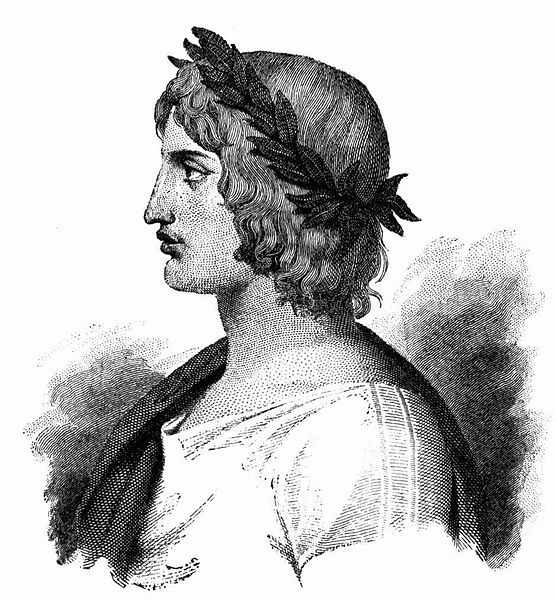 Virgil’s first major work was The Eclogues (also known as The Bucolics), a collection of ten eclogues (as the title suggests). An eclogue is a classical poem with a pastoral subject. This book established Virgil as a great Roman poet and a celebrity in his own time.

First page of The Eclogues, 1632 edition

Next he wrote The Georgics, which also takes an agricultural theme. Unlike The Eclogues, though, The Georgics is far from an example of peaceful pastoral poetry. Its four books drip with tension. 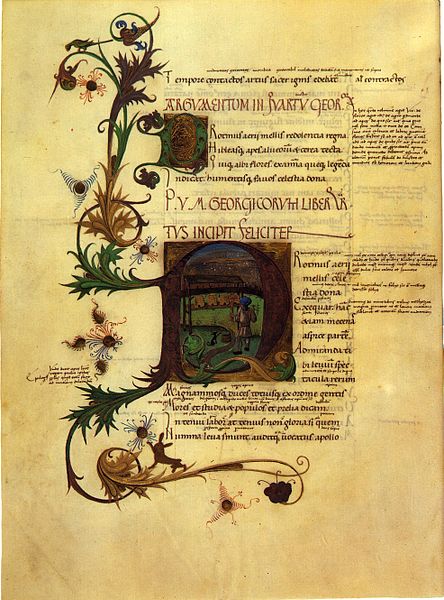 First page of Book Four of The Georgics, 1632 edition

Then came Virgil’s great masterwork, The Aeneid, which he wrote during the final eleven years of his life. Like his other books, The Aeneid too is written in dactylic hexameter, a style most commonly found in classic epic poetry. It doesn’t work very well in English. The modern language it’s most successful in is German.

The Aeneid, divided into twelve books (really parts), tells the story of Aeneas, son of Prince Anchises of Troy and the goddess Aphrodite. He escapes his burning city at the end of the Trojan War, with his little boy Iulus and a band of friends. They sail around for a long time trying to find a new home, having many adventures along the way, until finally they reach Rome. There’s a huge war between Aeneas’s followers and the Rutuli during the second half.

It doesn’t take a genius to see many obvious parallels between The Aeneid and Homer’s The Iliad and The Odyssey!

According to tradition, Virgil sailed to Greece around 19 BCE to revise The Aeneid, met Augustus Caesar in Athens, and decided to head home. While in a town near Megara, Greece, he caught a fever. A weakened Virgil passed away upon his arrival in Brindisium’s harbour on 21 September.

Augustus wisely ignored Virgil’s orders to burn The Aeneid, and instead told his literary executors to publish it with as little editing as possible. 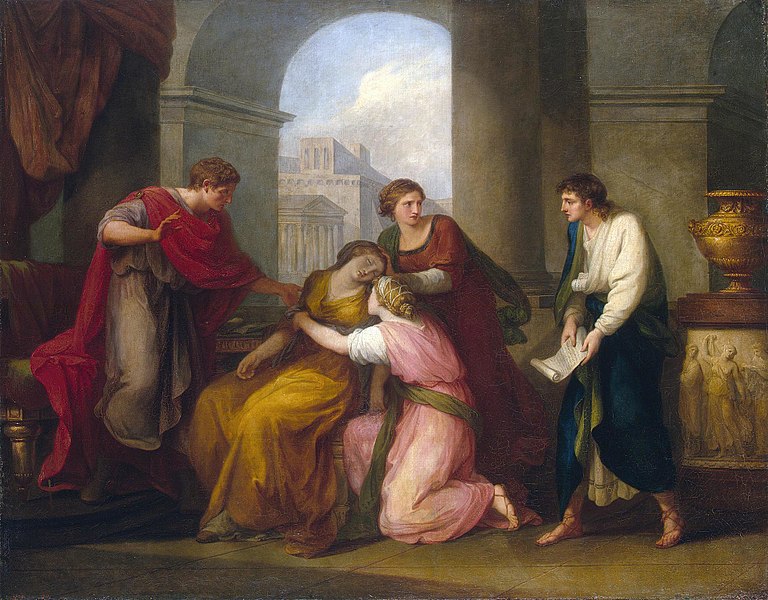 Virgil reading the Aeneid to Augustus and Octavia, Angelica Kaufmann, 1788

During the Late Roman Empire and Middle Ages, Virgil’s birth name Vergilius morphed into Virgilius, either because of a false etymology with the Latin word virgo (virgin) and Virgil’s excessive modesty, or an analogy between the Latin word virga (wand) and the prophetic, magical powers attributed to Virgil during the Middle Ages.

Virgil, Dante’s idol, is his guide through Hell and most of Purgatory. Dante is very frightened to see this shadowy figure, but ecstatic once he realizes who it is. Virgil comforts him and promises to guide him on the amazing otherworldly journey he’s about to undertake. 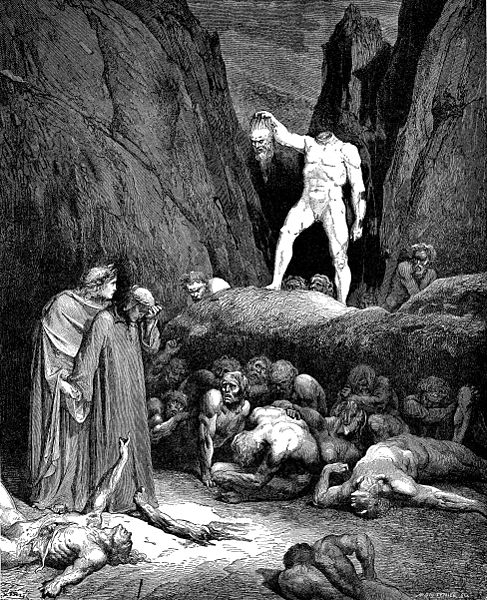 Virgil is a constant source of moral support, encouragement, and protection when Dante is afraid. During the poem’s dramatic midway point, Canto XVI of Purgatorio, Virgil guides Dante through a thick, blinding cloud of smoke as Dante clings to him and covers his eyes.

Virgil’s final words to Dante, at the end of Canto XXVII of Purgatorio, are “I crown and miter you lord of yourself!” He’s taken Dante as far as he can, and now it’s time for Beatrice to take him the rest of the way towards his final goal. 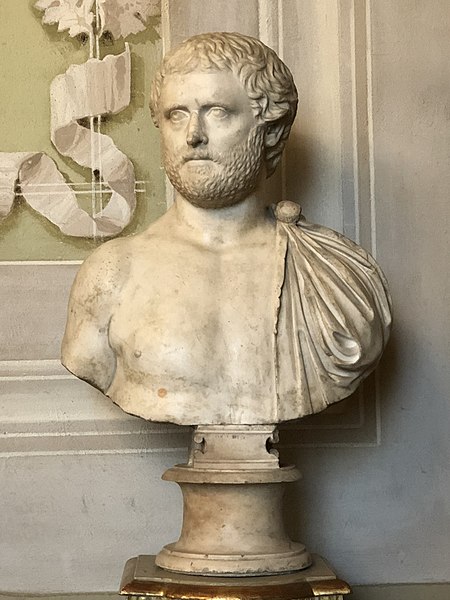 Publius Ovidius Naso was born in the town of Sulmo (now Sulmona) on 20 March BCE, into an important equestrian family. His father sent him to Rome to study rhetoric, which he hoped Ovid would translate into a law career. However, Ovid always tended towards the emotional side of law, not the argumentative, and abandoned this career when his 20-year-old brother died.

Ovid travelled to Sicily, Athens, and Asia Minor, where he held various minor public posts. This career too came to a premature end, and he resigned his current office to devote himself full-time to poetry around 29–25 BCE. His father quite disapproved of this.

Ovid’s first public recitation came when he was eighteen, about 25 BCE. He joined the circle whom Marcus Valerius Messalla Corvinus served as patron to. Ovid also befriended poets under the patronage of Gaius Maecenas. Probably the best-known of these poets to the average modern person was Horace. 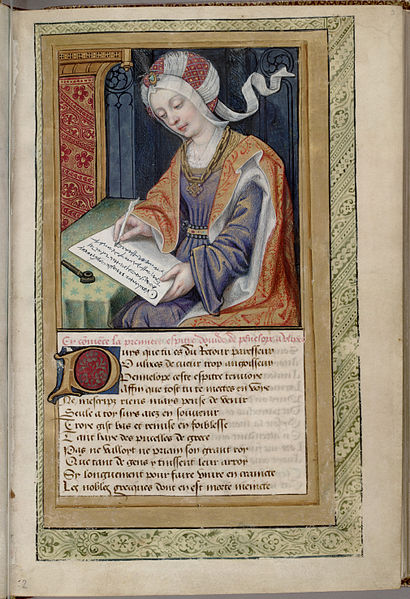 Page from The Heroides

Then came Ars Amatoria (The Art of Love), a three-book poetry collection about the arts of love and seduction. The first two books purport to teach men how to seduce and keep women, and the third book tells women about their own seduction techniques. 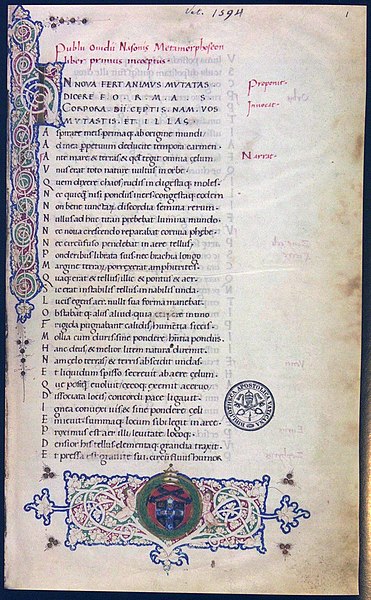 Then came his masterwork, The Metamorphoses (first page pictured above). Over 250 Greek and Roman myths are contained within the fifteen books. (“Book” tends to mean “part” in classical literature, not an entire full-length manuscript.) Much of our modern knowledge of Greco–Roman mythology and mythohistory comes from Ovid’s preservation of these stories when they were relatively fresh in human memory.

Countless authors over the centuries have been inspired by The Metamorphoses, and many works of art and music depict scenes and characters. Though Ovid’s readership and massive influence on Western culture began waning after the Renaissance, a revival started in the late 20th century. 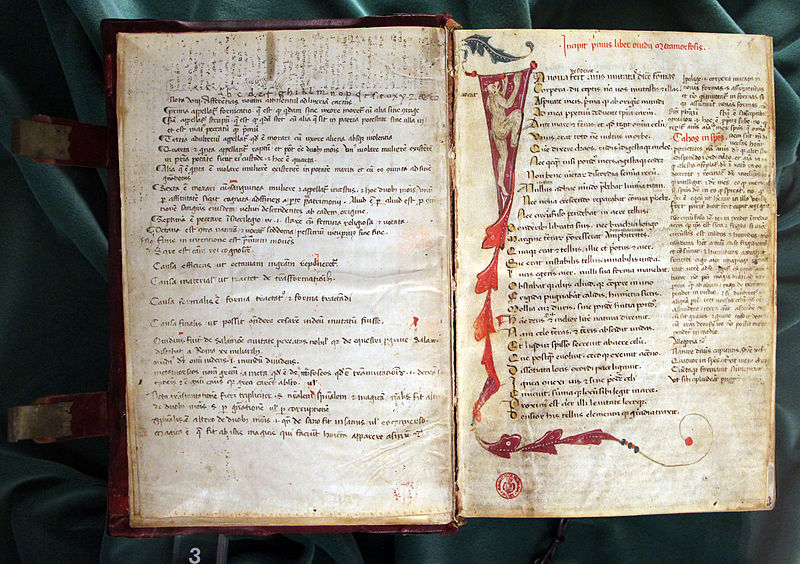 The Metamorphoses was Dante’s major source of knowledge about these myths too, along with The Aeneid. Many of the characters who appear in Inferno, and their stories, were drawn straight from the pages of Ovid.

Ovid appears in Canto IV of Inferno, among the great non-Christian poets stuck in Limbo, and is mentioned again in Canto XXV. Two of his stories from Metamorphoses are alluded to in Canto XXIX of Inferno and Canto XXII of Purgatorio. 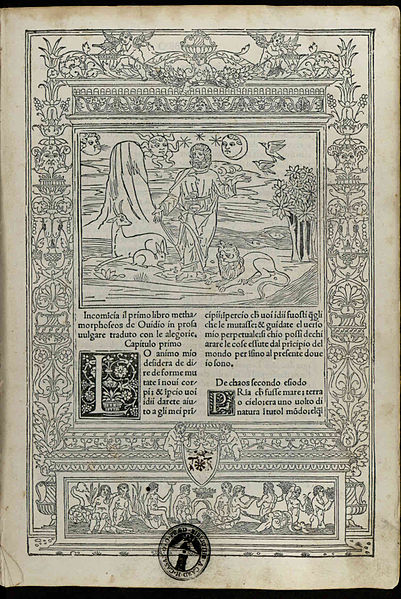 Despite Ovid’s popularity, Augustus Caesar exiled him to the remote province of Tomis (modern-day Constanța, Romania) by the Black Sea in 8 CE. Perhaps Dante felt a special bond with him because he was a fellow exile.

The reasons for Ovid’s exile have always been unclear. There have been many theories over the centuries (obscene verses, disrespect to Caesar, knowing too much about Caesar’s alleged incestuous relationships, catching Caesar’s daughter and granddaughter committing adultery or sleeping with them himself, opposing authoritarianism), but no concrete proof has ever been established.

In the early 20th century, another theory was introduced, claiming Ovid never was exiled at all, and that his writings about it are meant as satire and fiction. Mainstream scholars oppose this idea. 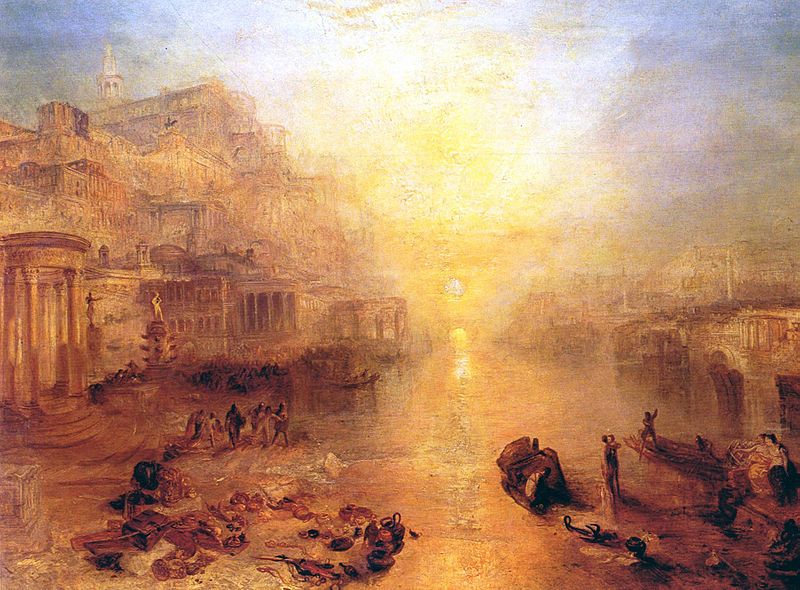 Other works of Ovid’s include Ibis, Tristia, Epistulae ex Ponto, Fasti, and Medea (the lattermost of which, Ovid’s only play, is now sadly lost). A number of other poems are spuriously attributed to him.