I originally intended this post to be part of my 2022 April A to Z series on Ukrainian history and culture, but I stuffed it into the drafts folder because I couldn’t find enough information about the church’s history, artwork, and architecture for a substantial, detailed post. Yet again, I didn’t allow myself any time to work on a post about my radical rewrite of The Very Last, so here’s that bonus A to Z post.

New additions are in bold.

Throughout history, Lviv’s Dormition Church has had four incarnations. The first, probably constructed during the High Middle Ages, was burnt in 1340 when Polish feudal lords attacked the city. Church #2, built of bricks and first mentioned in 1421, was destroyed in 1527 when a great fire swept through Lviv. Peter the Italian, an architect from Lugano who became a citizen of Lviv, rebuilt the church from 1547–59. Alas, the third church fell victim to another fire in 1571.

The Chapel of the Three Saints was built nearby from 1578–91, and the Italian architect Pietro of Barbona rebuilt the Kornyakt Tower, which had collapsed in 1570. Both of these structures were joined by a fourth church which was constructed from 1591–1629 by Paolo Dominici Romanus, Wojciech Kapinos, and Ambrosiy Prykhylnyy. The ikons were painted by Mykola Petrakhnovych-Morakhovskyy and Fedir Senkovych.

Many people financed the construction, primarily Moldovan rulers (both male and female). It was originally built of brick, but midway through construction of the walls, the Assumption Brotherhood replaced it with hewn stone. The church was consecrated on 26 January 1631 by Lviv Bishop Yeremiya Tissarovskyy and Kyiv Archimandrite Petro Mohyla.

On 3 January 1584, prior to the start of construction on the fourth church, the Catholic Archbishop of Lviv, Jan Dymitr Solikowski, attacked the existing church. He expelled congregants, scorned the priest and ignored his authority, and sealed the church.

And what was the unspeakable crime committed by the Orthodox faithful? Not adopting the Gregorian calendar and continuing to use the Julian calendar, which was ten days behind by the 16th century, on account of a never-corrected error from the Council of Nicaea.

This intolerant archbishop also forbade Ukrainians from ringing church bells on their own holiday dates and attacked the Church of the Epiphany that same year of 1584. 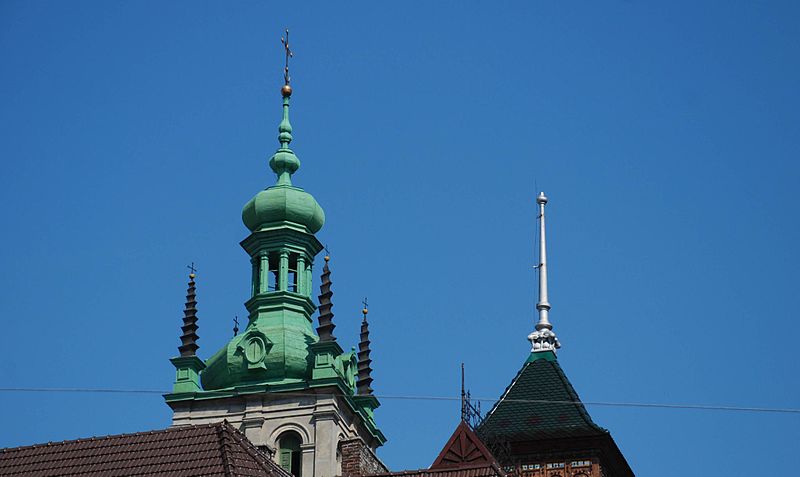 In the 18th century, noblewoman Feodosiya Strilbytska, wife of parish priest Oleksiy Strilbytskyy, donated 6,000 złotych to the church. Out of gratitude, a painting of her was put on display. It’s now in the Lviv National Gallery of Arts.

Yet another fire damaged the church in 1779, and it was rebuilt in 1796 with a few changes. Perhaps surprisingly, given the era, it was beautified with stained glass windows designed by Petro Ivanovych Kholodnyy in 1926–27. Though Soviet rule was atheist, Stalin hadn’t yet risen to full, unquestioned power and begun cracking down on the use of non-Russian national languages and cultures. During the 1920s, national expression flourished in republics which had long been under the heel of enforced Russification. 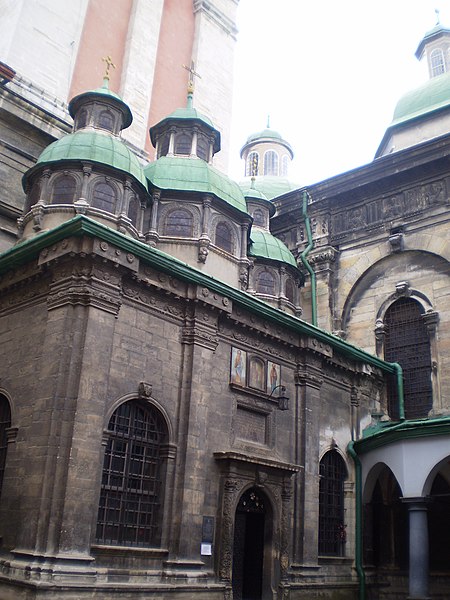 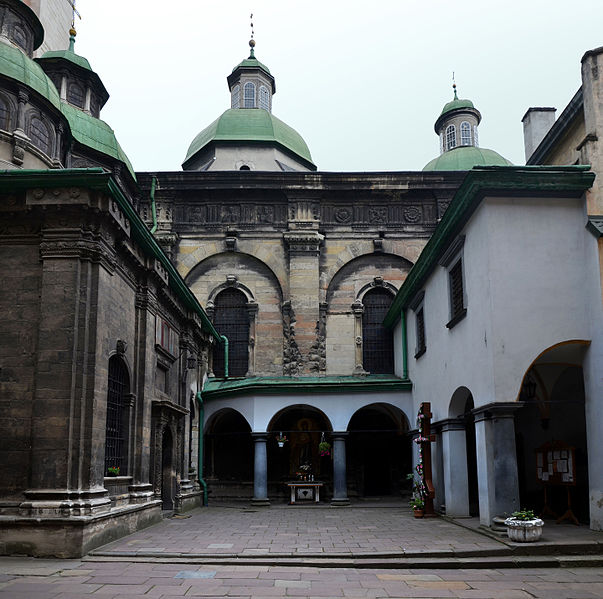 Lviv artists Kostyantyn and Yakiv Kulchytskyy carved the coats of arms of donors Simeon and Iyeremiya Mohyla above the northern and southern doors.

Some of the ikons in the ikonostasis have been with the church since the fourth iteration opened in the 1630s. The most valuable are from the Passion Cycle, made by Fedir Senkovych and Mykola Petrakhnovych-Morakhovskyy. 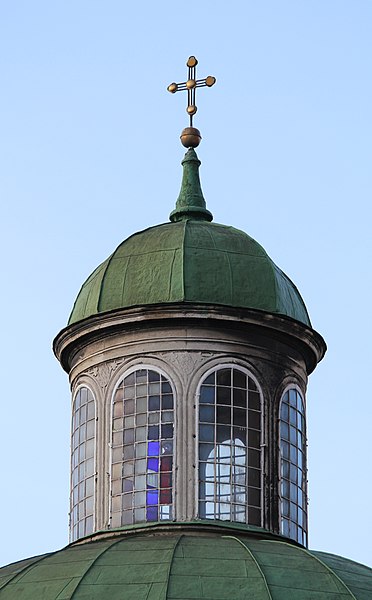 The church was restored and repaired from 1965–73.

The Lviv Assumption Brotherhood, the non-clerical Ukrainian Orthodoxy fraternity who founded the church, remains active to this day. Members patronize the Sunday school, care for the building’s upkeep, and organize the cultural and spiritual life of the church.

On 29 November 1989, the church came under jurisdiction of the Ukrainian Orthodox Church. The Sunday school began in 2008, with three age groups, and a children’s choir was formed in 2012.

Lviv, the largest city in Western Ukraine, was named for King Lev I of Galicia–Volhynia, also Grand Prince of Kyiv (ca. 1228–1301). The city was known as Lvihorod (Lev’s City) in Ancient Ruthenian. Well-known other names include Lemberg (German and Yiddish), L’vov (Russian), and Lwów (Polish).

The first inhabitants were White Croats who arrived in the fifth century of the Common Era. Several other Slavic tribes moved in and fought for control during the next few centuries. The battle for ownership was settled in 981, when Grand Prince Vladimir the Great annexed the area to Kyivan Rus and built a castle.

When Galicia was created in 1084, the settlements which became the nucleus of Lviv were included in the territory.

The city was officially founded in 1256. According to tradition, its founder was King Daniel of Galicia, who named it after his son Lev, but other chronicles claim King Lev himself was the founder.  Still other sources cite it as a joint effort.

In 1259 or 1261, under threat of Tatar invasion, Daniel and Lev were forced to destroy the wooden castle on Castle Mountain. Galicia then became a vassal of the Golden Horde. Because the ancient capital of Halych had been destroyed by Mongols in 1241, commingled with a growing Polish threat, Lev moved the capital of Galicia–Volhynia to Lviv in 1272.

The city quickly developed after this. 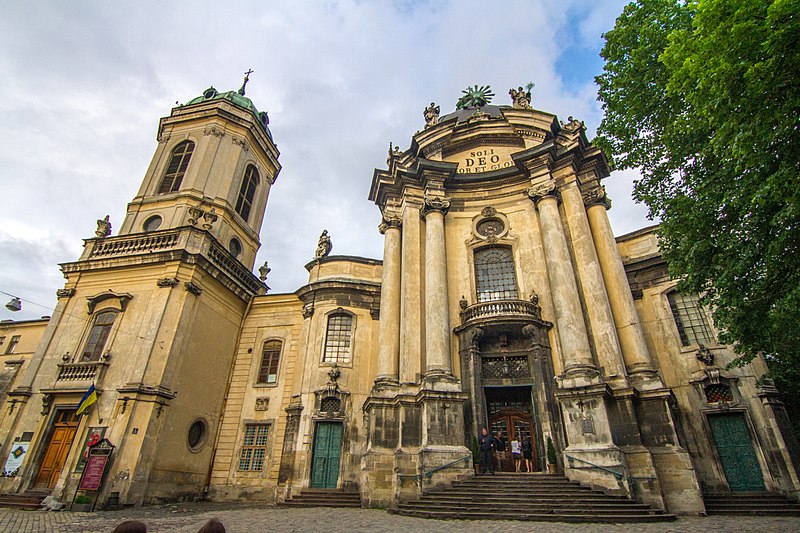 Lviv soon attracted many merchants from Armenia and the German lands, and gained even more population when a lot of Poles immigrated from Kraków to escape famine.

In 1340, Lviv became part of the Grand Duchy of Lithuania. That same year, King Casimir III of Poland invaded and burnt the new castle. Dmytro Dedko, Lord of Ruthenia, repulsed the invasion, but after his 1349 death, Casimir returned and claimed Lviv as his own.

As part of the Kingdom of Poland, the Ukrainian population were subject to constant pressure to convert to Catholicism and adopt Polish language and customs. 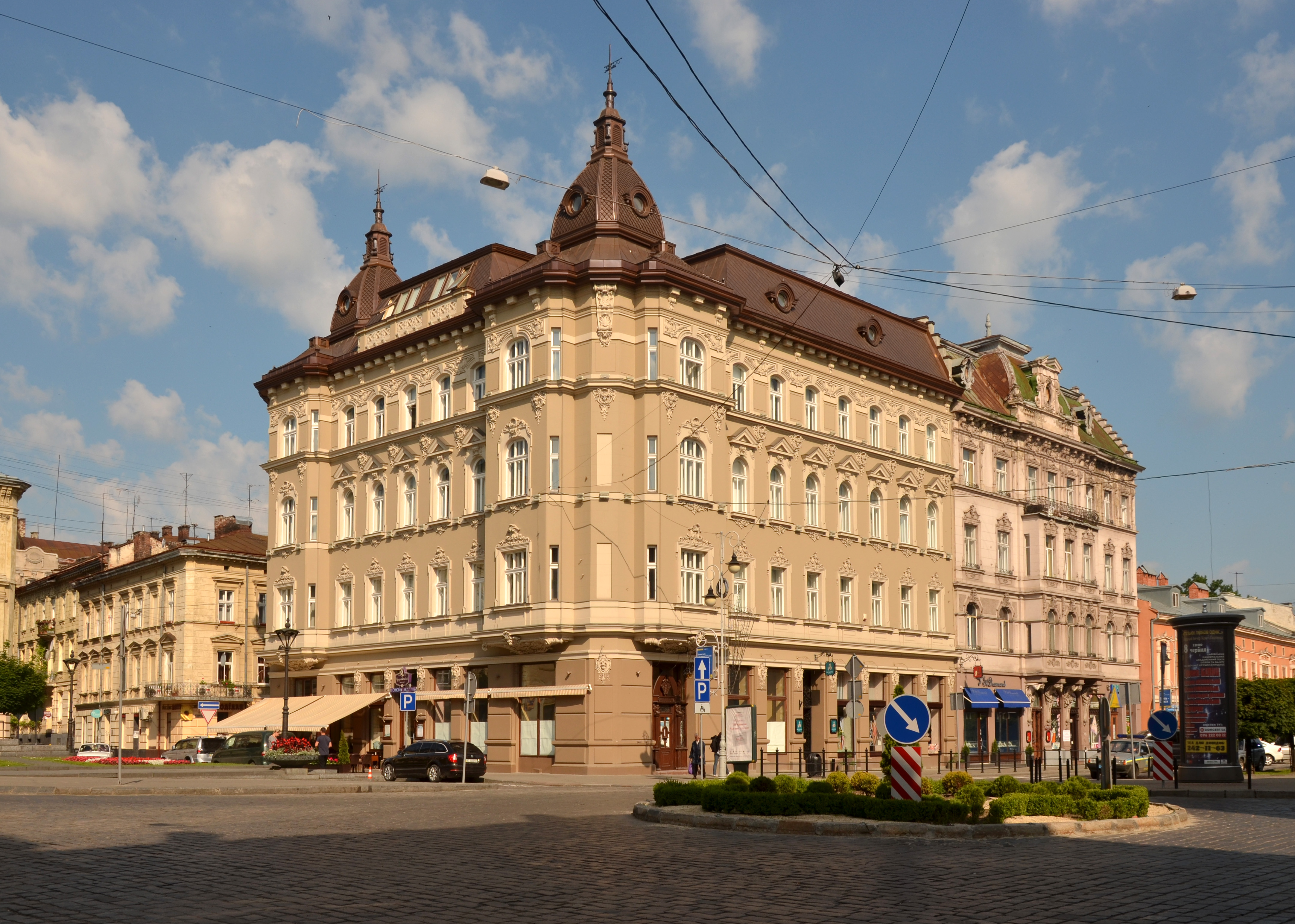 Lviv received Magdeburg rights in 1365, providing the city with some internal autonomy. In 1387, Galicia–Volhynia was briefly occupied by Hungary, but after Queen Jadwiga of Poland invaded, the area was annexed to the Polish Crown.

In the mid-17th century, the Ukrainian lands were beset by a long period of constant uprisings and wars against the various foreign occupiers. Most of these uprising were led by Cossacks, but there were also several invasions by other countries.

Sweden invaded Poland in 1655 and succeeded in capturing most of the kingdom, and laid Lviv to siege. However, they were forced to retreat before they could capture the city.

Ottomans and Tatars attacked in 1672 and 1675, and there was also an invasion from Transylvania. Then Sweden attacked again in 1704, captured Lviv, and pillaged the city.

Church of the Dormition, Copyright Kugel

All Saints Church in the convent of Benedictines, Copyright Neovitaha777

After the First Partition of Poland in 1772, Lviv was annexed to the Kingdom of Galicia and Lodomeria and officially named Lemberg. Under Habsburg rule, cultural life and higher education thrived for the next few decades, and the population increased.

Ukrainians, Ruthenians, and Poles were all swept up in the revolutionary nationalist fervor sweeping Europe in 1848, which greatly alarmed the Austrian authorities. Among other draconian, cruel measures carried out, all demonstrations were put down, streets were barricaded, the town hall was set on fire, houses were searched, the city centre was bombarded, and martial law was declared. 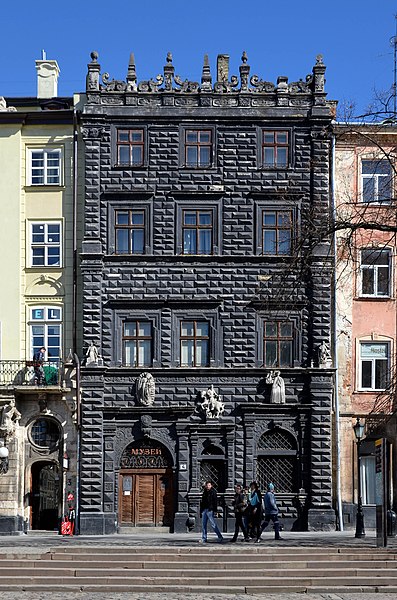 With the Austro–Hungarian Compromise of 1867, the Habsburgs agreed to split their empire with the Kingdom of Hungary, ending the 18-year military dictatorship and absolute rule following the 1848 revolution. Lviv became the capital of Galicia and began rapidly developing under Polish nobles’ rule.

Along with much new construction came a much-needed sewer system, reinforced concrete, a railway, both horse-drawn and electric trams, surgical innovations, new technology, a theatre and opera house, and water mains. Legal emancipation was also granted to the Jewish community in 1870.

Lviv was a very important centre of the Ukrainian national revival.

Church of the Ascension, Copyright Neovitaha777

During WWI, Lviv was initially captured by the Russians, but retaken by Austria–Hungary a year later. After the war, Lviv became the capital of the short-lived West Ukrainian People’s Republic. During this time, the Polish–Ukrainian War raged, as each ethnic group fought for control. When the Polish majority captured Lviv in November 1918, they looted and burnt the Jewish and Ukrainian quarters (including a pogrom), shut down all Ukrainian cultural institutes and societies, arrested and fired Ukrainians, and forced Ukrainians to work on Greek Catholic religious holidays.

As Lwów, the city was a major centre of culture, science, and education in Poland, second only to Warsaw. It earned the nickname Little Paris. Though Ukrainians were only 15% of the population and faced a lot of discrimination, they nevertheless cultivated a great cultural and national renaissance during the interwar years.

Lviv was occupied by the USSR from 1939–41, a period of repression and mass deportations to Siberia. The Nazis took control on 30 June 1941. Many Ukrainians welcomed them as liberators, but soon realized their new occupiers were just as bad as the Soviets.

Lviv’s Jewish community, which was the third-largest in Europe and increased in size due to war refugees, lost thousands of people in pogroms during the early days of the Nazi occupation. The survivors were put into a ghetto and later deported to Bełżec or Janowska. Only a few hundred remained by the time the Soviets liberated the city. 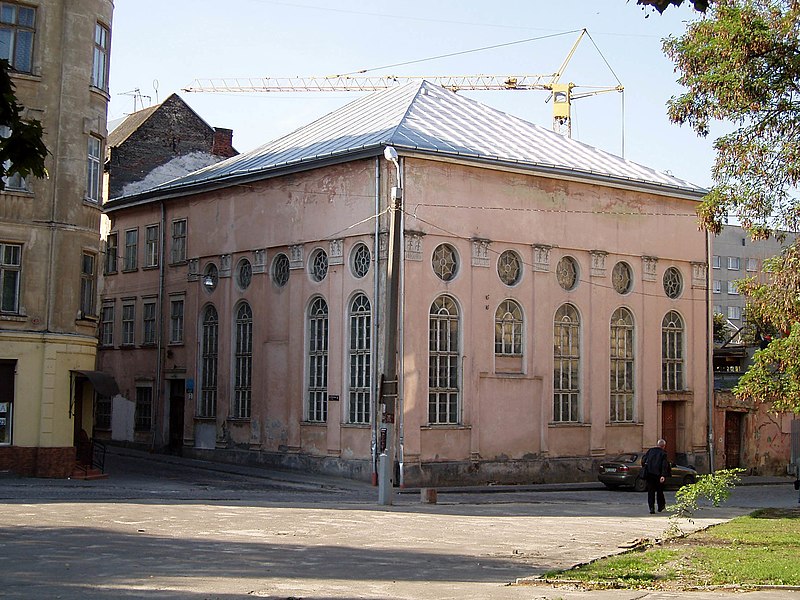 After the war, Lviv became part of Soviet Ukraine. Due to population transfer, the city quickly gained a Ukrainian majority.

Today the city is one of Ukraine’s most important cultural, educational, political, and economic centres, and is renowned for its beautiful architecture.