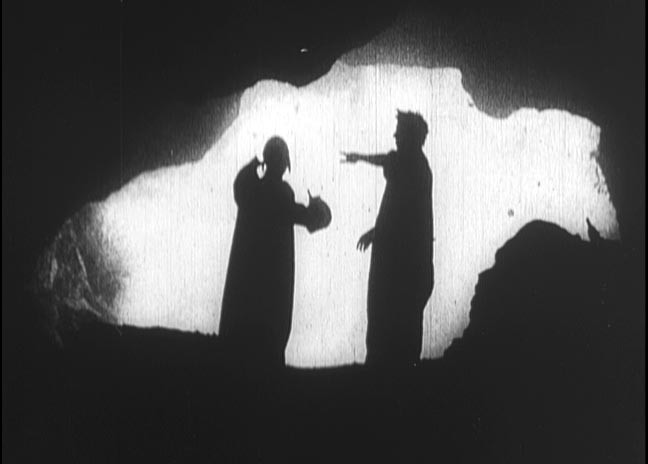 I had the privilege of adding Italy’s first feature film, L’Inferno, to my list of silents seen as #1,117. I can’t believe I’d never had a chance to see it before, given how famous and important it is, and how in love with Dante I am. I went back and forth with a few versions before finally settling on the Tangerine Dream soundtrack. It seemed the most appropriate, as jarring as it was to occasionally hear singing.

Released 10 March 1911 by the Teatro Mercandante in Napoli (Naples), this film was over three years in the making and a huge international success. In the U.S. alone, it made over two million dollars. Since it was over an hour long, theatre owners felt justified in raising ticket prices.

L’Inferno is not only widely considered the first true blockbuster of film history, but the finest film adaptation of any of Dante’s writings ever. I wish they’d gone all the way and done Purgatorio and Paradiso as well!

1910s films have always been kind of hit-or-miss for me. They remind me of a gangly preteen or teenager with growing pains, in process of finding an established place in the world. Films had evolved beyond short snippets and one-reelers, but the medium couldn’t jump right into fully-blown perfect features and longer short subjects. Everyone was still learning how to tell stories via moving pictures, and that included acting techniques, camera movement and angles, and scripts.

This excellent 105-year-old film isn’t one of those 1910s films which disappointed me. It does such a wonderful job of bringing Dante’s otherworldly journey to life. The scenes and characters are based upon the famous 19th century woodcut illustrations by Gustave Doré, which were very familiar internationally. 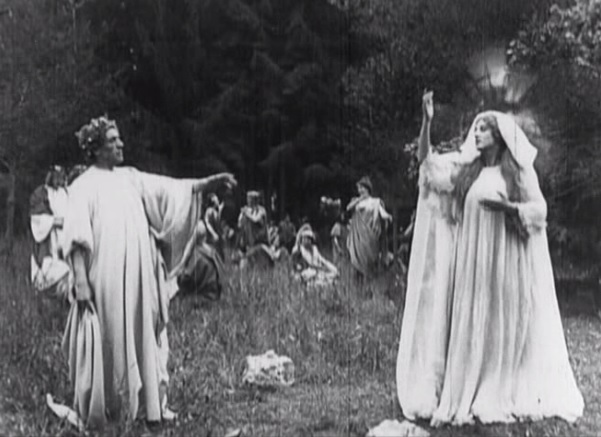 If you’ve read The Divine Comedy, you’re probably familiar with the general outline of the story. On Good Friday in the year 1300, Dante wakes up in the Wood of Error, no idea how he got there or how he lost the way so badly. He takes heart from the rising Sun, and begins climbing the Delectable Mountain.

Dante is ambushed by a leopard (lust), a lion (pride), and a female wolf (avarice). He turns back in terror and encounters his idol, the great Roman poet Virgil. Here the film takes a turn from the book by showing Beatrice summoning Virgil to rescue Dante.

The film does such a wonderful job at bringing Dante’s rich imagination to life, and depicting each Circle and Ring of Hell. Along the way, several famous stories are told in flashback, such as the stories of murdered lovers Francesca da Rimini and Paolo Malatesta, and the unfortunate Count Ugolino. Some scenes from the book are left out, and some of the geography is altered, but overall, it’s really faithful to the source material.

Some arrogant modern-day folks who can’t think outside of CGI might mock the special effects and otherworldly creatures as lame and outdated, but I really loved them. There was so much effort put into making this film, and Doré’s illustrations really are brought to stunning life.

Some of the creatures are still just as terrifying in the modern era, like Bertram de Born holding his own severed head, the giant head of Lucifer eating a person, and thieves transmogrifying into snakes. 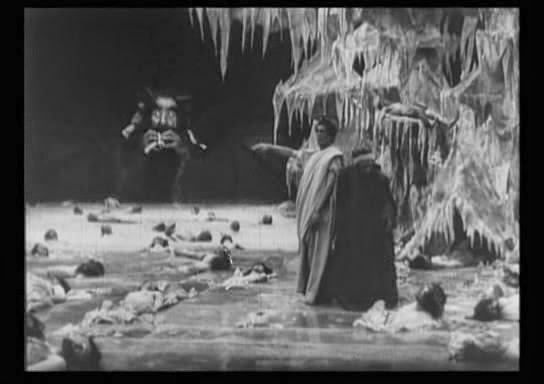 L’Inferno contains one of film’s rare few depictions of Prophet Mohammed. His chest gapes open and his entrails hang out. Dante, like most Medieval Christians, was under the false impression that Prophet Mohammed was a schismatic, though he was never Christian to begin with!

I’ll have a future post discussing how to handle and express discomfort with things like this when reviewing older books and films.

There’s really no substitute for reading the book (all the way through, not just Part I!), but the film does a masterful job at showing many of the scenes and conveying the essence of this great work of literature. However, since film technology wasn’t yet equipped to film in the dark, we don’t get to see the stars Dante and Virgil behold again when they climb out of Hell at the end.

It’s hard to put into words just how very, very much Dante means to me, how much I love and admire him. He represents the best the human race is capable of, a beautiful antidote against all the evil, ignorance, and cruelty that exists. No matter how far we might fall, how badly we’re lost, there’s always hope of finding our way back.