After the Intermission, we rejoin Scarlett in the final stages of the Civil War. She and her sisters Suellen and Carreen shoulder most of the burden of keeping Tara running, while Melanie is still very weakened from childbirth and spends most of her time abed.

Melanie wants to make herself useful, though, and gets out of bed more than once. On one of these occasions, a Union soldier breaks in searching for valuables. Scarlett shoots him with the gun Rhett gave her while they were fleeing Atlanta and relieves the corpse of his money and valuables. She and Melanie then dispose of the body, promising to tell no one what happened.

When the war ends, Tara becomes a way station for returning Confederate soldiers, much to Scarlett’s displeasure. One of them is Frank Kennedy, Suellen’s much-older suitor. (In the book, he’s about thirty years older.) Another soldier brings news of Ashley, who’s in a prison camp. Scarlett is thrilled when he arrives a few months later, but Mammy holds her back from rushing to embrace him.

Reconstruction brings high taxes which threaten Tara’s ownership. Scarlett begs Ashley to run away to Mexico with her, and he kisses her and admits he still loves her. However, he refuses to leave the sickly Melanie and their little boy Beau. Ashley also tells Scarlett she should love Tara more than anyone, and adds he plans to move his family to NYC to start over.

Scarlett, always prone to dramatics, pitches a fit which draws Melanie’s attention. To cover what really happened, Scarlett says she wants Melanie and Ashley to stay at Tara to help her, and Ashley, weak-willed as always, gives in without a battle. 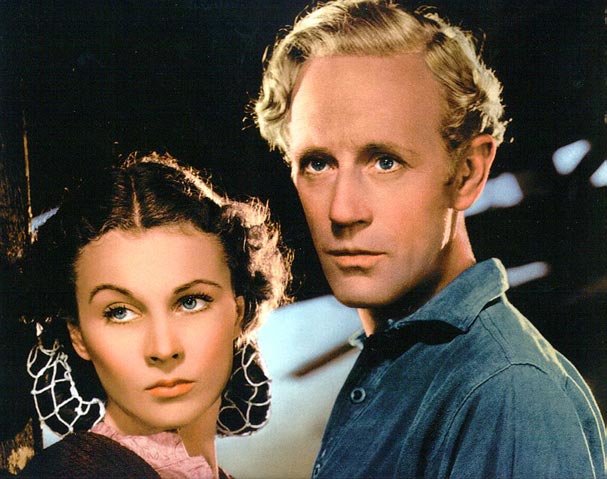 Jonas Wilkerson, Tara’s former overseer, makes Scarlett an offer which she angrily refuses. Mr. O’Hara chases after him on horseback as he departs. Sadly, he’s killed when the horse falls while trying to jump a fence.

After the funeral, Scarlett turns to Rhett for help, believing he has more than enough money to save Tara. However, he’s now in jail in Atlanta, and will be hanged unless he turns over his Confederate gold. His prewar money is in London banks.

Mammy makes Scarlett a new dress from a green curtain for the occasion, and accompanies her so she won’t get into trouble in the big city or at this minimum security prison. Scarlett pretends to be Rhett’s sister. 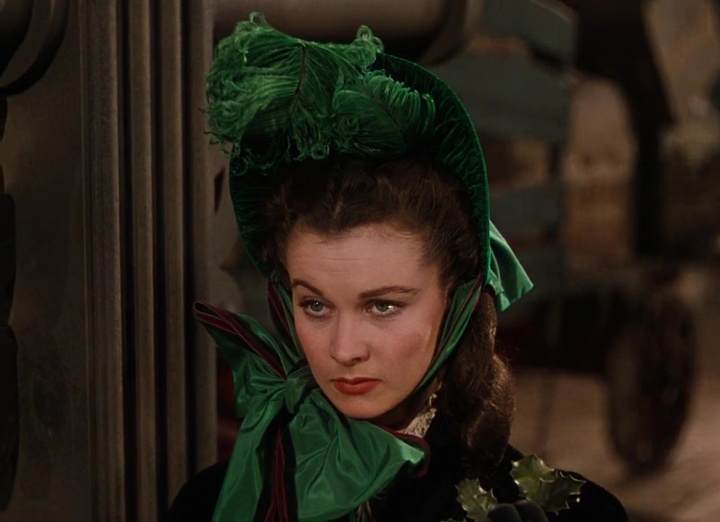 Scarlett pretends life at Tara is swell, but Rhett knows it’s a ruse when he sees her work-worn hands. This doesn’t deter Scarlett at all; on the contrary, she shamelessly begs for money and even offers to become Rhett’s mistress. Rhett refuses, saying if he helped her, he’d get in a lot of trouble.

While walking through Atlanta afterwards, Scarlett encounters Frank Kennedy, now a successful businessman in the hardware and wood industry. He tells Scarlett he’s saving all his money to marry Suellen and bring her to Atlanta.

Never one to let an opportunity slip through her fingers, Scarlett lies Suellen is married to another man, and offers herself as a wife. Mammy is horrified, and Suellen is heartbroken, but Frank’s money saves Tara.

Scarlett becomes very wealthy from the lumber and hardware store she manages, though she refuses credit to impoverished neighbors. Thanks to the cake deals she makes with Northern businessmen, she’s able to buy a sawmill, and Tara gradually returns to its glory.

Scarlett also employs convicts and a former prison overseer. Ashley doesn’t like this at all, but his protests hold no sway.

Sometime later, Scarlett runs across Rhett, who’s now free and once again wealthy. He tells he she could’ve married him and shared in the riches if she’d waited, but Scarlett brushes him off and continues on to the sawmill.

Rhett warns her about travelling through a shantytown on the way there, full of Army deserters and dangerous criminals, but Scarlett insists the gun he gave her will protect her.

Scarlett gets attacked in the shantytown, before she has a chance to pull out the gun. Big Sam, a former slave at Tara, rescues her from an attempted rape.

Word gets around quickly, and the menfolk go to a supposed political meeting. During the evening, Rhett visits and says Ashley and Frank are in a vigilante group which is in danger of being busted by the Union Army. In the book, they’re in the KKK, and lynch the guys who attacked Scarlett.

Melanie gives Rhett the address, and later that night he returns with Ashley and Dr. Meade. They’re accompanied by Union soldiers, who were fed a fish story about a visit to Belle Watling’s brothel.

After the soldiers leave, Ashley reveals he’s wounded, and Rhett says Scarlett’s attackers are dead. Scarlett cares only for Ashley’s welfare, and is shocked back into reality when Rhett says Frank is lying dead in the road.

Several days later, Rhett visits again and proposes to Scarlett. She says she’ll always love only Ashley, but that she’ll marry Rhett for his money. Rhett doesn’t care about the lack of love, since they’re two of a kind. They honeymoon in New Orleans, and Tara is restored to its former splendor after their return. Rhett also buys a mansion in Atlanta.

Rhett and Scarlett soon have a daughter, Bonnie Blue, whom Rhett absolutely dotes on. Scarlett, meanwhile, wants no more children and declares she’ll never sleep with Rhett again. Rhett threatens divorce, but relents for the sake of avoiding scandal.

In 1871, Scarlett and Ashley are caught in an embrace, which sets in motion a disastrous, snowballing series of events threatening Scarlett and Rhett’s already shaky marriage. By the time Scarlett realises Rhett is the only man for her, it might be too late to salvage their relationship. 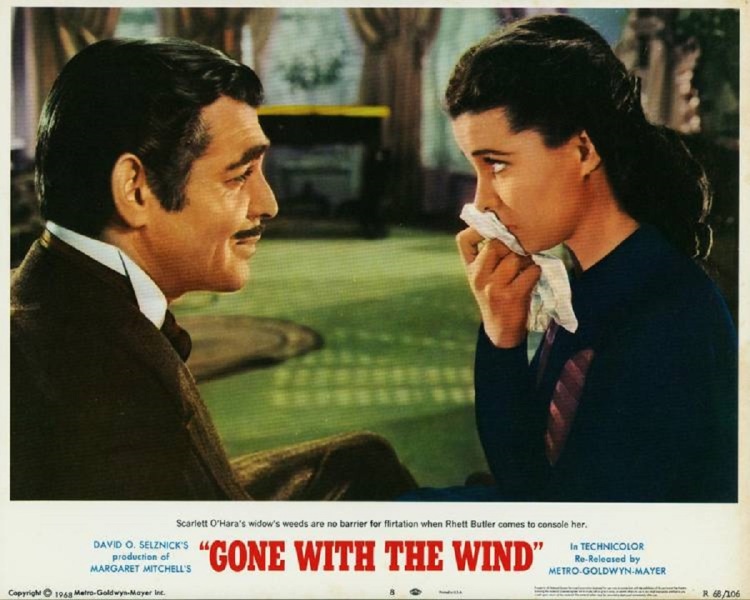 One of the greatest films of the greatest year of cinematic history premièred near the very end, 15 December 1939, at Loew’s Grand Theatre in Atlanta. This epic screen adaptation of Margaret Mitchell’s classic sweeping saga of the Old South is one of those films like The Wizard of Oz, so well-known it feels almost pointless to bother giving a recap. Has anyone not seen GWTW at least once?!

On the eve of the Civil War, pretty, popular Southern belle Katie Scarlett O’Hara (Vivien Leigh) lives the life of Riley on her family’s plantation Tara in Clayton County, Georgia. The talk of impending war bores Scarlett terribly, and she abandons her suitors to talk with her father in the fields.

Mr. O’Hara delivers a devastating piece of news—there’s a barbecue coming up at nearby Twelve Oaks to celebrate the engagement of cousins Ashley Wilkes (Leslie Howard) and Melanie Hamilton (Olivia de Havilland). Though many men are competing for her hand, Scarlett only has eyes for the milquetoast Ashley, and is determined to stop this marriage from happening.

On the day of the barbecue, Scarlett insists on wearing a dress with a plunging neckline and refuses to eat the tray of food her Mammy (Hattie McDaniel) gives her. “Respectable” women weren’t allowed to demonstrate real appetites, esp. not in front of men. Thus, Scarlett isn’t supposed to eat anything at the barbecue and “ruin” her figure. (Little wonder so many girls and women have eating disorders!)

Scarlett wins the fight about the dress, but Mammy still makes her eat the food to ruin her appetite and remain unnaturally thin.

At the barbecue, Scarlett flirts with all the single gentlemen, hoping to make Ashley jealous. Then, during the ladies’ nap, Scarlett sneaks away to meet Ashley in the parlour. Her attempts to turn Ashley’s head and get him to jilt Melanie are all in vain.

There’s a long tradition of marriages between Ashley and Melanie’s families, since they’re so well-educated, intellectual, and serious-minded. While Scarlett lives for social life and superficial things, Ashley and Melanie both enjoy discussing ideas, debating politics, and reading great literature.

Though Ashley rebuffs Scarlett’s advances, this doesn’t deter her at all; on the contrary, it makes her even more determined to win his love. Ashley’s wishy-washiness doesn’t help matters, since he admits he’s attracted to Scarlett and kind of leaves the door open for future stolen moments. Scarlett declares she’ll hate him forever, but actions speak louder than words.

Also attending the barbecue is black sheep Charlestonian Captain Rhett Butler (Clark Gable), who’s immediately drawn to Scarlett. He witnessed the row between her and Ashley, and doesn’t understand what such a sassy, feisty woman sees in a guy like that.

The barbecue goes haywire when news of the declaration of war breaks, and all the young men rush off to enlist. Hoping to make Ashley jealous, Scarlett impulsively decides to marry Melanie’s brother Charles. Shortly before this, Charles and Rhett got into a heated argument when Rhett defied popular opinion to declare the North is better-equipped for victory.

Charles was gunning for a duel, but Rhett left the room to diffuse the situation. Though Charles thought Rhett a coward, Ashley told him Rhett is a much better shot and would’ve killed him. 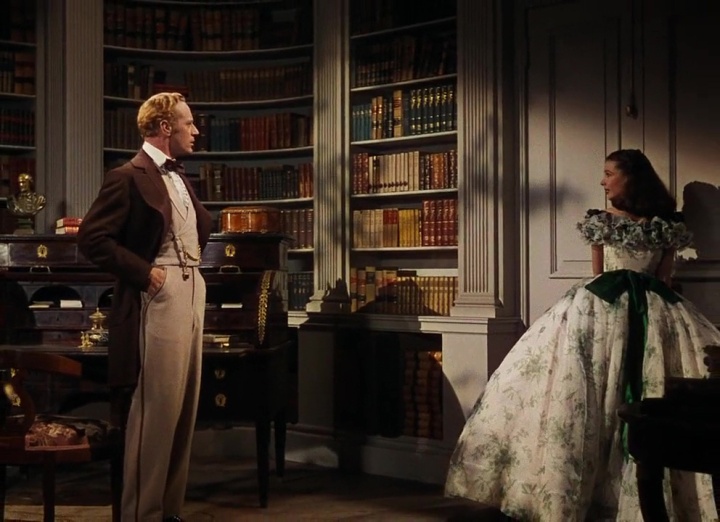 Several months later, Scarlett becomes a widow when Charles dies of the measles (one of those lovely diseases anti-vaxxers giggle off as no big deal). Her mother suggests she move to Atlanta to break her melancholy (which of course isn’t caused by Charles’s death). Scarlett will live with Melanie and Melanie’s spinster aunt Pittypat.

Scarlett attracts scandal when she attends a fundraiser in 1862 and dares to dance instead of demurely standing off to the side in her widow’s weeds. One of the few people at the charity event who doesn’t disapprove of her behaviour is Rhett, now making a fortune as an arms smuggler.

When Melanie donates her wedding ring to the war effort, Scarlett follows suit. Melanie, always seeing the best in people and unaware of untoward motivations, applauds this noble sacrifice. A dance auction is then held, and Rhett chooses Scarlett as his partner when he wins.

As they dance, Rhett tells Scarlett he wants her to someday say she loves him, and she says that’ll never happen.

By 1863, things aren’t going so well on the Atlanta homefront, and Scarlett and Melanie are forced into nursing work. Scarlett has to shoulder the burden of most of it, since Melanie, now pregnant after a furlough visit from Ashley, isn’t in the best of health.

Aunt Pittypat soon leaves to avoid the constant sound of artillery, compelling Scarlett into the role of mistress of the house. Her only help, slave Prissy (Butterfly McQueen), isn’t much help at all, esp. when Melanie goes into labour.

As Atlanta burns, the ladies escape back to Tara, with help from Rhett, the only person Scarlett knows who can get them to safety. Once they’re outside city limits, Rhett announces his plans to enlist and leaves them to journey the rest of the way alone.

Rhett professes his love before he leaves, which greatly angers Scarlett. 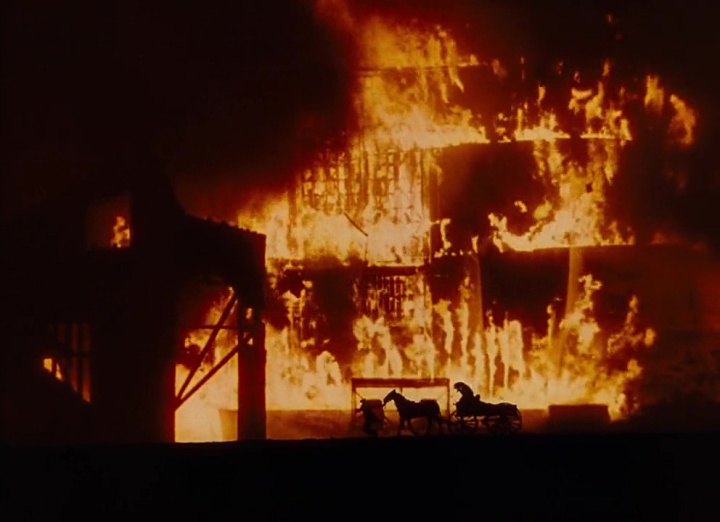 Their harrowing journey ends at a plundered, devastated Tara and a burnt Twelve Oaks. Even worse, Scarlett’s dad has gone half-mad since the recent death of his wife, and only two slaves are left, Mammy and Pork. All the other servants and slaves ran away or joined the Union Army.

Part I ends as Scarlett stands in the desolated fields, famously swearing, “As God is my witness, I’ll never be hungry again!” 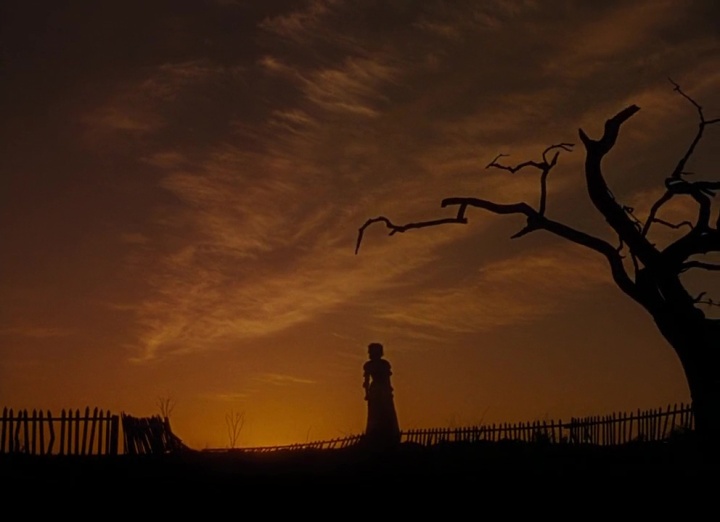