Welcome back to Weekend Writing Warriors and Snippet Sunday, weekly Sunday hops where writers share 8–10 sentences from a book or WIP. This week’s snippet immediately follows last week’s, when the disappearance of Emánuel and Adrián was noticed. 15-year-old Kálmán is horrified to learn no one told him earlier, but his three older friends care less.

Not only are they picking on Emánuel, who’s no longer there to defend himself, but they also return to their second target, 14-year-old Móric, the youngest member of their group. Both of them have survived long past the time anyone expected.

“By all means, go ahead and try to look for them among these corpses,” Gáspár said. “They’ll shoot you too, and there’ll be one less thorn in my side.  I can’t believe you’ve gone this long without losing hope.”

Móric lifted out a shovelful of cold dirt. “Mani can’t be dead.  He was always so good to me, and took care of me like his own brother.”

“Birds of a feather.” Gáspár threw off the dirt on his shovel and pushed it back into the slightly unthawed ground. “Mani never would’ve been a man’s man either.  We all know you’re only here because Zaki and Viki felt sorry for you when we arrived.”

Móric was only 13 when they were deported, and everyone considered him a boy, particularly his mother and older brothers Zakariás and Viktor. He’d become bar mitzvah, but he wasn’t deemed old enough for long pants yet, and he didn’t get to do as many things as the older teenagers in his local youth group.

His mother insisted he stand in the women and children’s line when they arrived at Auschwitz at the end of June 1944, but Zakariás and Viktor had a bad feeling about the selection patterns they observed, and went to get Móric. He smiled the biggest smile of his life when Zakariás told him, “I take back everything I said.  You’re a man now, little brother.”

Móric was separated from them when they were chosen as mechanics for another camp. Zakariás entrusted their friends with looking after him, since he’d never be able to face his mother in the other world if her youngest remaining child were murdered. His parting words to Móric reminded him he’s a real man now, and to always act like one.

Welcome back to Weekend Writing Warriors and Snippet Sunday, weekly Sunday hops where writers share 8–10 sentences from a book or WIP. This week’s snippet comes a few lines after last week’s, when the SS officers broke up the fight and shot those attempting to escape in the middle of the commotion. The prisoners have been forced to dig graves for their comrades, as a lesson in what’ll happen to them if they try the same thing. 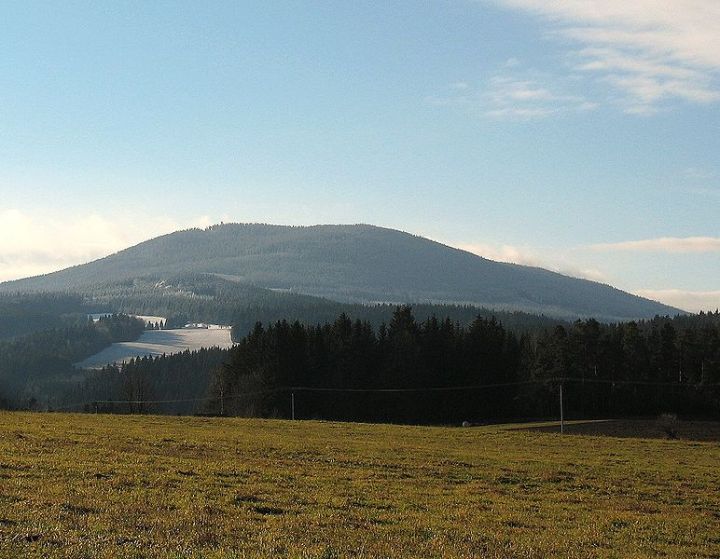 Area near Boubín Forest and Mountain, the site of this scene, Copyright Dingoa at Czech Wikipedia

An officer with a misshapen face handed out shovels from a cart of supplies they’d organized shortly after the unplanned march began, and then the prisoners began digging.  They barely made a dent in the frozen earth, so a tall, blonde officer made a bonfire.  Anyone caught too close to the fire was chased away with kicks and curses.  The fire was to warm the earth for grave-digging, not to warm up the prisoners’ weary bones.

“They think we’re so uppity for acting like human beings instead of meek, obedient slaves,” Kálmán said as he assaulted the ground with his shovel. “I can’t wait to dig their hateful graves and laugh.”

Gáspár leaned against a tree for support, his face bloodied from scratches. “I wish I were one of the corpses going into these graves.  It’s not fair.  Why couldn’t one of those bullets hit me too?”

Welcome back to Weekend Writing Warriors and Snippet Sunday, weekly Sunday hops where writers share 8–10 sentences from a book or WIP. This week’s snippet immediately follows last week’s, as tensions ran high among a group of friends pushed to the breaking point after nine months of Nazi captivity. Four of them have kept their humanity and hope, while the other three are devolving into animals and turning on their old buddies.

Muselmann is the German word for a Muslim, but it was used in the camps to refer to a totally emaciated, zombie-like person.

Several feet away, Gáspár spied a motionless Muselmann.  Without wasting a second, he leapt on the fresh corpse and began pulling off his clothes, shoes, and blanket.  Gáspár laughed maniacally when he found a partly-molded chunk of bread on a string around the dead man’s neck.

Adalbert’s sunken eyes blazed. “Hey, you have bread!  Give it to me now!”

Gáspár took a big bite, and in the next moment, both Adalbert and Ágoston leapt on him.  Several other prisoners joined in the fight, while many of the others cheered on their friends.