Released November 1919, British film The Beetle was based on Richard Marsh’s 1897 novel of the same name. Upon its release, it outsold contemporary, similarly-themed competitor Dracula. The story is told by four narrators and concerns an Ancient Egyptian god seeking revenge upon a British Member of Parliament.

It initially was released as a serial under the title The Peril of Paul Lessingham: The Story of a Haunted Man in Answers, from 13 March–19 June 1897. It came out in volume form from September to October the same year, with the title it became famous for, The Beetle: A Mystery.

Many believe this book was the inspiration for Bram Stoker’s 1903 novel The Jewel of Seven Stars, which also features an Ancient Egyptian theme.

This first film adaptation stars Maudie Dunham, Fred Morgan, and Hebden Foster. It was produced by Jack W. Smith and directed by Alexander Butler. Sadly, the film appears to be lost, though many films presumed lost for decades have turned up in the unlikeliest of places.

Contemporary reviews described it as an Ancient Egyptian High Priestess of Isis (Leal Douglas) turning herself into a beetle to get revenge on MP Paul Lessingham (Foster). This is no ordinary transformation, since she can appear as a woman or man in addition to a beetle. Lessingham turns to his romantic rival for help in defeating this creature.

One reviewer described it as mediocre and more unintentionally hilarious than spine-chilling or dramatic, though the special effects were highly praised. The production was also called to task for its supposed carelessness. 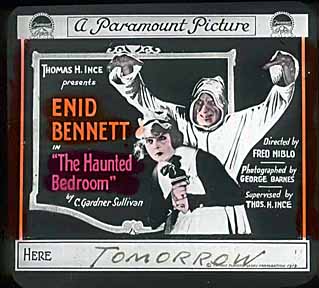 The Haunted Bedroom, released 25 May 1919, is also lost. Its alternate title was The Ghost of Whispering Oaks.

According to contemporary reviewers, New York reporter Betsy Thorne (Enid Bennett, wife of director Fred Niblo) travels to a Southern U.S. depot to investigate a mysterious disappearance. At the depot, she overhears a detective and sheriff saying all reporters are barred from the house and grounds at the centre of the mystery.

Betsy runs across a Richmond maid sent to the house and scares her into agreeing to an identity switch. At the house, Betsy discovers some incredible goings-on, and is terrified by a ghostly figure rising from an organ in the chapel her first night.

Everyone comes running at her screams as she runs away, and the missing man’s sister forbids her from returning to the chapel. The next night, she’s locked in her room during a thunderstorm, and sees the ghostly figure again while escaping through a window. This time, the figure’s in the family graveyard.

Betsy finds an old African-American gentleman who agrees to help her. (Given the era, I wouldn’t be shocked if he were an overly spooked caricature instead of a fully-rounded person who just happens to be a little frightened.) The duo begins investigating the house, starting with the organ.

They discover keys which enable a secret door in the organ to open, revealing a secret passageway to the family tomb. Hiding in there are two crooks whom Betsy discovers were trying to extort a young man accused of the crime.