Dushanbe, the capital of Tajikistan, has a population of about 679,400 and has served as the capital since 1925. Though there’s archaeological evidence of settlement dating to the 5th century BCE, Dushanbe was just a small, sleepy village till the early 20th century. It became a town in 1923, in the Emirate of Bukharia, and rose to much more prominence after becoming the capital. From 1931-60, it was renamed Stalinabad.

Central Asia isn’t as backwoods as many people might dismiss it as. Dushanbe got its first airport in 1924, a railroad began in 1929, the Tajikistan National Museum opened in 1934, their zoo opened in 1960, and today the city has many universities, museums, cultural centres, and other modern amenities. The city also boasts an orchestra, an arts and sciences school for the deaf-mute, and a trolleybus system.

Dushanbe is nestled where the Varzob River and the Kofarnihon River converge. Its name means Monday in the Tajik language, drawn from the fact that the modern city developed at the site of a weekly Monday market, Dyushambe-Bozor. The old name was a Russified version of the Tajik name, meaning “second day after Saturday.” Under Soviet rule, the city swelled in population and became a prominent producer of cotton and silk. 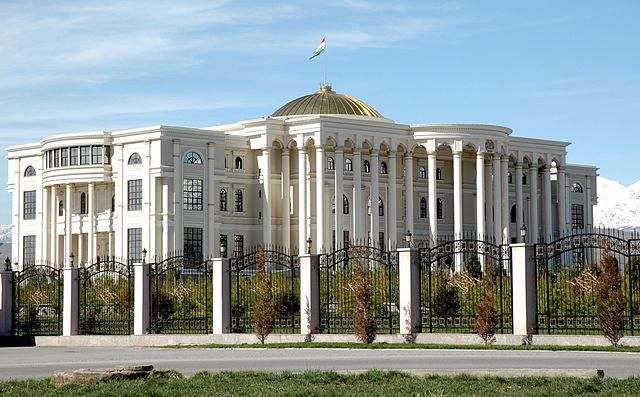 I haven’t written about Dushanbe to date, but I do have a Tajik secondary character in my WIP, Journey Through a Dark Forest. Manzura, one of the new generation of orphanage children, was born in October 1926, and among the many non-Russian children forcibly taken to Mrs. Brezhneva’s Kyiv orphanage. She was possibly at the orphanage by the time of the Holodomor, the deliberate famine which killed millions of Ukrainians between 1932-33.

Manzura volunteers herself as an interpreter while part of the orphanage is en route to Isfahan, since Tajik is the closest language to Persian among the many languages spoken by the children. She’s all of ten years old at the time, in the early Summer of 1937, and brashly asks if she’ll get paid for her services. Mrs. Brezhneva is as typically bemused as ever, and immediately shoots down the idea. Once in Isfahan, Manzura makes herself extremely useful.

Palace of Nations side view, with the world’s tallest flagpole, image by Шухрат Саъдиев. 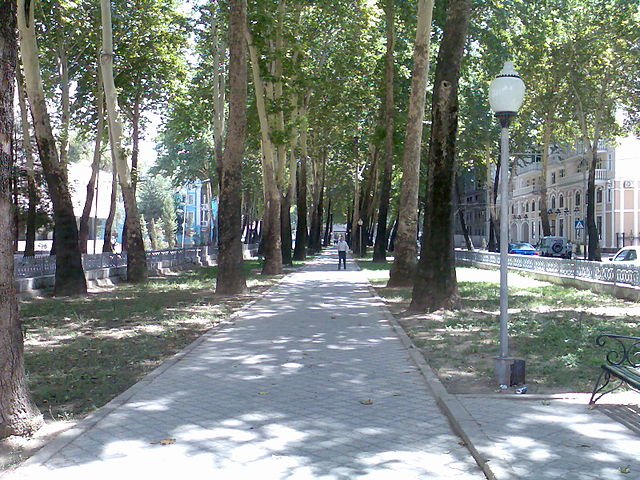 Dushanbe is home to the Tajikistan National Museum, the Dushanbe Zoo (considered one of the best Soviet zoos, but now rather reduced in size), the world’s tallest flagpole, the Gurminj Museum of Musical Instruments, and twelve universities, including an international school.

Old train in a park by the main railway station; Transferred from en.wikipedia; transferred to Commons by User:Kafuffle using CommonsHelper; original uploader Harveyqs at en.wikipedia; CC-BY-SA-3.0; released under the GNU Free Documentation License.

The historic Old Dushanbe Synagogue was torn down in 2008, in spite of community protests. The government wanted room to build the Palace of Nations and renovate the city centre. This was Tajikistan’s last functioning synagogue, and still served the small community of several hundred people. The shul was built in the 19th century by the Bukharian community, though there’s been a Jewish community in Tajikistan for over 2,000 years. Along with the shul, the government also destroyed the mikvah, the school, and the kosher butcher’s shop. The government refused to recognise any of these structures as historic.

In 2009, the New Dushanbe Synagogue was opened in a building donated by Hasan Assadullozoda, the brother-in-law of Tajikistan’s President Emomali Rakhmon. 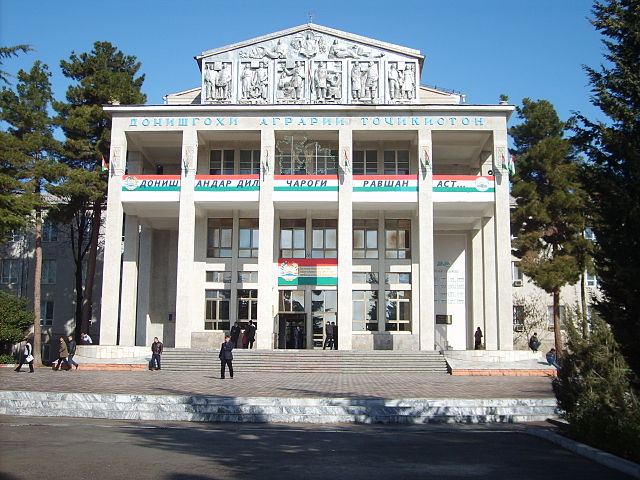 Courtyard of the former Dushanbe Synagogue, image by Zvi Lerman.