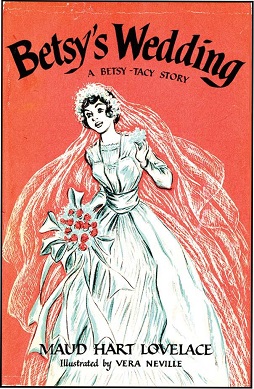 Betsy has just returned home from her interrupted Grand Tour, which her dad sent her on to get inspiration for her writing. (If only everyone had that kind of class privilege!) Before she left London (due to the outbreak of WWI), she and her ex Joe arranged to meet in New York Harbor on 7 September and make another go of their relationship.

Betsy and Joe were practically engaged as university students, but broke up when she sort-of cheated on him. During Betsy’s entire Grand Tour, she frequently found herself thinking about Joe, and when they meet again, they immediately decide to marry.

Since most of their relationship happened between books, though, and Joe was always more of a secondary character, the lightning speed of their reconciliation and their intense feelings don’t feel entirely believable. I wish Mrs. Lovelace had written a few books about the years between Betsy and Joe and Betsy and the Great World. The infodumpy backstory in Chapter 2 of Great World and Betsy’s appearances in spinoff books don’t have the same impact. 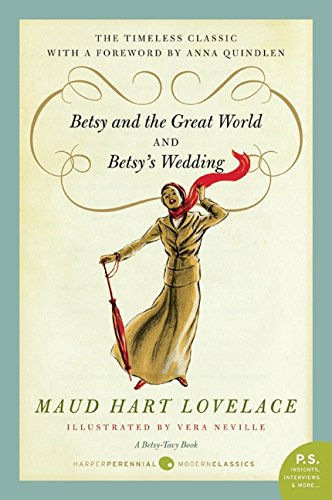 Betsy and Joe have a grand time in NYC, though Betsy keeps pressing Joe for a formal proposal. She sensibly doesn’t want Joe to waste money on an engagement ring, but he buys her a wedding ring at Tiffany’s. Soon after their reunion, Betsy journeys home to Minnesota.

Since the Rays are joined at the hip, Betsy’s parents are convinced she’ll stay at home for many years. When she breaks the news about her engagement, they’re stunned. Particularly because she and Joe want to be married in a week, and Joe lives in Boston.

But Betsy reassures them she’ll still be nearby, since Joe quit his job in Boston. Without having a new job in Minneapolis lined up! And he didn’t even ask Mr. Ray for permission. (An unthinkable horror!)

Since there are no truly black clouds in Betsy’s idyllic life, her parents’ objections are quickly overcome, and Joe finds a newspaper job after going to several offices (racking up a huge cab fare in the process). Tacy and her husband Harry (whom I will never see as anything but a creepy groomer) loan them a cottage by the lake for their honeymoon, and there’s a lovely wedding at the Rays’ house.

After an idyllic honeymoon, Betsy’s little sister Margaret finds them a great apartment. The landlady is the mother of her BFF Louisa, whom Margaret calls Boogie. Louisa in turn calls her Bogie, and Mrs. Ray and Betsy can’t believe these high school girls aren’t boy-crazy yet.

Betsy is determined to be the perfect housewife, though she’s never been domestically inclined. She puts her mind to learning how to cook, clean, bake, budget, and iron, having many funny failures along the way. Betsy even refuses a job offer from Joe’s boss, saying her only job is being Joe’s little wifey. (A complete departure from her well-established character!)

Ladies and gentlemen, this is the character Anna Quindlen thinks is such an incredible, unsung feminist! A few books earlier, Betsy and Tib lamented how Tacy would be an old maid because she wasn’t interested in dating at the ripe old age of seventeen.

Betsy and Tacy’s schemes to marry off Tib backfire, and Betsy eventually realizes how wrong it was to try to choose a husband for another woman. You can’t force a relationship on anyone, and it’s better to marry for love. I was very happy when Tib found her perfect match all by herself.

A monkey wrench is thrown into Betsy and Joe’s lives when Joe’s aunt Ruth comes to live with them. They’re forced to buy a house and give up their lovely apartment. More challenges come when Joe starts working the night shift

But through all these ups and downs, Betsy emerges as a mature adult in her own right, and still finds time for her old friends. These things become very useful when the U.S. joins WWI and Joe enlists in the Army. 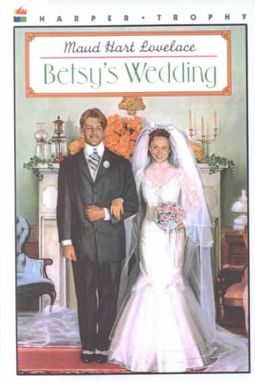 4 thoughts on “The perfect conclusion to a classic Bildungsroman series”