The National Academy of Visual Arts and Architecture in Kyiv, founded as the Ukrainian Academy of Arts, had its grand opening on 22 November/5 December 1917, and was officially established on 5/18 December 1917. It was created, financially supported, and run by many prominent Ukrainian artists, a few scientists, and one historian. The first generation of professors were among the finest artists working in Ukraine at that time.

A fifth new name was bestowed in 1934, the All-Ukrainian Art Institute. This name stuck until 1992, when it became the Ukrainian Academy of Arts. Its seventh name, Academy of Visual Arts and Architecture, came in 1998. In 2000, the school assumed its present name. 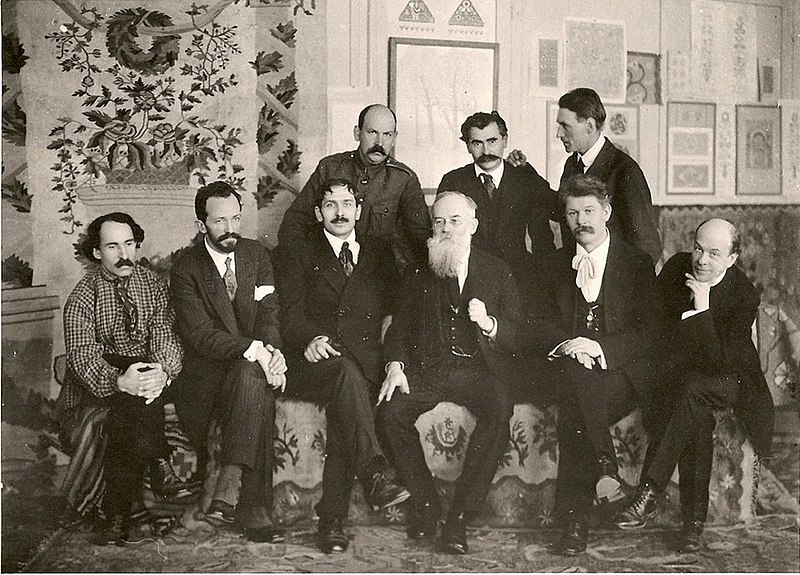 The academy’s founders on opening day

Classes were first held in the former Kyiv Pedagogical Museum on 57 Volodymyrska Street, next door to the Yellow Building of St. Vladimir University (now Taras Shevchenko National University of Kyiv). Today this building is known as the Teacher’s House and is part of a reborn Pedagogical Museum.

Not long after the academy’s founding, classes were moved to a former trade school. During this time, in February 1919, it gained research institute status, but not for long. Kyiv changed hands between the Reds and Whites very frequently during this period, and when the Whites retook the city, the academy lost its state funding. The building was also taken away from them, and all its belongings were tossed into the attic. 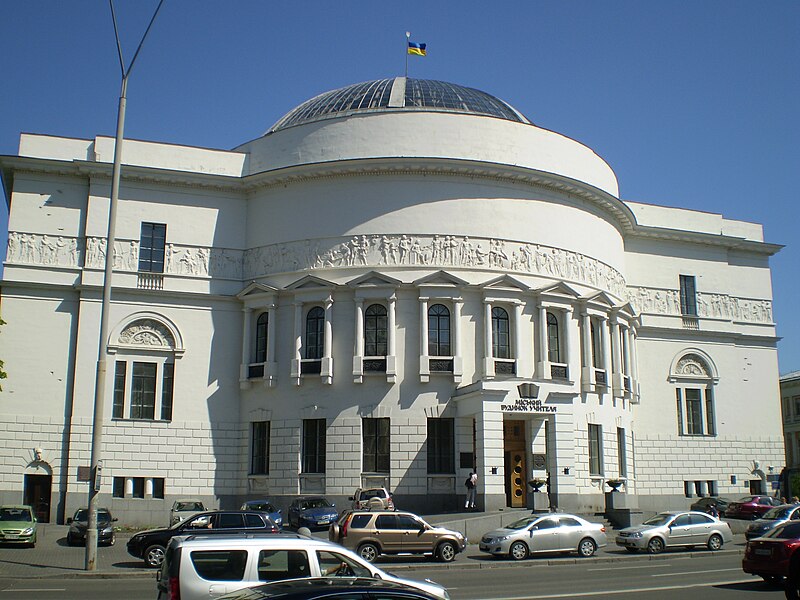 In December 1920, when Soviet rule was established once more, the academy moved to the former Noble Assembly. As aforementioned, it went through several name changes over the next few years. The academy also relocated to the former Kyiv Theological Seminary at 20 Voznesenskyy Descent. This street was variously called Smirnov Street, Smirnov Descent, Smirnov-Lastochin Descent, and Smirnov-Lastochin Street from the late 1920s until 2015, when the historic name was restored.

During the tumultuous first decade of its existence, the academy’s departments expanded beyond the traditional fine arts offerings of paintings, sculpture, drawing, and architecture to include such fields as ceramics, art politics, film, and photography. The classes and concentrations became even more modern and diverse in the early 1930s; e.g., art and propaganda, sculptural decoration of Socialist cities, decoration of proletarian life, Communist art education.

The academy has its own coat of arms, a crimson Baroque shield with an image of Sirin, a bird with a female head from Slavic folklore. Sirin is indestructible, has the gift of prophecy, and is said to be able to see into the most secretive corners of the universe. On the shield, she appears in gold, representing greatness and nobility. Above is the Sun, a symbol of skill and knowledge.

The shield is bordered by a green wreath of oak and bay leaves wrapped in a ribbon with the inscription “Ukrainian Academy of Arts.” The green of the wreath represents wealth, life, and indestructibility. The front of the ribbon is white, and the reverse is blue.

Over the years, a number of sculptures of famous Ukrainian writers and artists have been added to the grounds, along with a memorial to students and professors killed during WWII, a memorial plaque of the founders, and the above-pictured Monument to Repressed Artists.

During its 100+ years of existence, the academy has produced over 7,000 acclaimed artists and more than earned its reputation as Ukraine’s pre-eminent institute for fine arts and architecture education.