It’s time for another meeting of the Insecure Writer’s Support Group. The first Wednesday of each month, we share struggles, triumphs, quandaries, and fears. This month’s question is:

What would make you quit writing?

Death. I want to die with my boots on and write till the last possible moment, till Archangel Michael descends to Earth to carry my soul away. I also want to give it my all till the end instead of phoning it in if my health declines, the way Freddie Mercury still sang like a god even when he was dying.

I knew going in I probably wouldn’t come anywhere close to 50K for JuNoWriMo, and I was right. At least I didn’t set myself up for a crushing disappointment and denial of reality by pretending otherwise. But it wasn’t so much my overall slowed writing progress caused by lockdown this time as it was life imitating art.

I thought I’d begin my new alternative history on the first of the month, esp. since I’ve been wanting to do this for 17 years and finally pulled together a storyline and many details. But I just couldn’t do it immediately.

I finally began it on 9 June at 9:00 at night, since nine was Dante’s favorite number and it appears often in his work. Then it was really slow going for awhile until I overcame my initial doubts and cowardice. After all, who am I to not only write about one of the greatest writers in history, but in the first person? I’m not that chutzpahdik, am I? 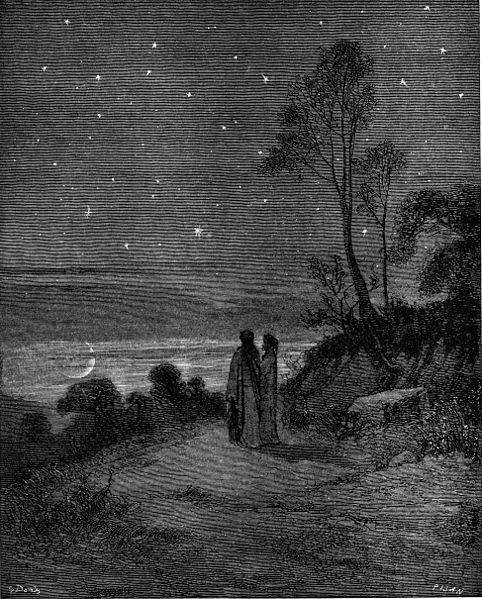 At the end of Canto I of Inferno, Dante is really hopped-up about going on the otherworldly journey promised, particularly since it means he gets to hang out with his idol. But then, at the start of Canto II, he’s seized by a fit of cowardice and second thoughts:

“Then I began: ‘O poet come to guide me,
tell me if you think my worth sufficient
before you trust me to this arduous road….

But why am I to go? Who allows me to?
I am not Aeneas, I am not Paul;
neither I nor anyone would think me worthy;

and so, if I should undertake the journey,
I fear it might turn out an act of folly—
you are wise, you see more than my words express.'”

I think it’s a good portent that I did have some second thoughts, hesitation, and cowardice. Writers should have a healthy dose of pride and chutzpah, but it should be combined with humility and caution. If you’re going to write about real people from history, particularly in the first-person, you need to be 100% motivated by love and respect. It’ll be obvious in the finished product if you only chose that person to mindlessly follow a trend or because you thought s/he sounded cool.

I’ll be discussing this in much greater detail in a future post, but suffice it to say for now, I’m absolutely horrified at this turn of events, and how many writers happily cheered on Ms. Powers’s firing. Since May, a lot of people have been showing some very ugly true colors in their support of antisemitism repackaged under the guise of being woke.

I won’t name and shame, but a writer I considered a virtual friend for quite a few years soft-blocked me on Instagram because I shared so many stories calling out antisemitism and supporting Israel’s right to exist and defend itself against terrorism.

Pardon my French, but if you feel the same way as the “I’m not antisemitic, but…” crowd, Allez vous faire foutre! You are not my friend or ally, and your rhetoric has helped to fuel the recent spike in hate crimes all over the world. Yet again I’m deeply disappointed in the popular face of the writing community nowadays.

I’ve set a lowball goal of 15K for Camp NaNo, and so far am on track to achieve it. As I’ve been doing since 2017, I also count blog posts as creative nonfiction towards my wordcount.

Are you doing Camp NaNo? Have you ever had an “I am not Aeneas, I am not Paul” moment in your own writing or life?