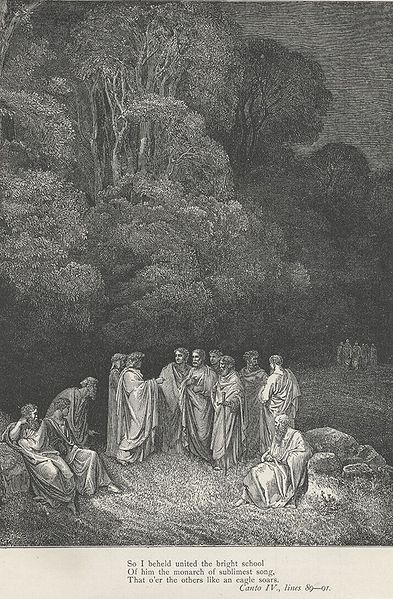 Despite my love of The Divine Comedy after reading it for the first time at age 24, I nevertheless managed to come away with a rather shallow, surface reading of many things. I blame my translation, the speed at which I read, and my lack of supplementary study materials. There’s also the uncomfortable fact that my cognitive development wasn’t quite finished, and so I was incapable of thinking like a complete adult about certain things.

One of those things was non-Christians automatically going to Limbo. 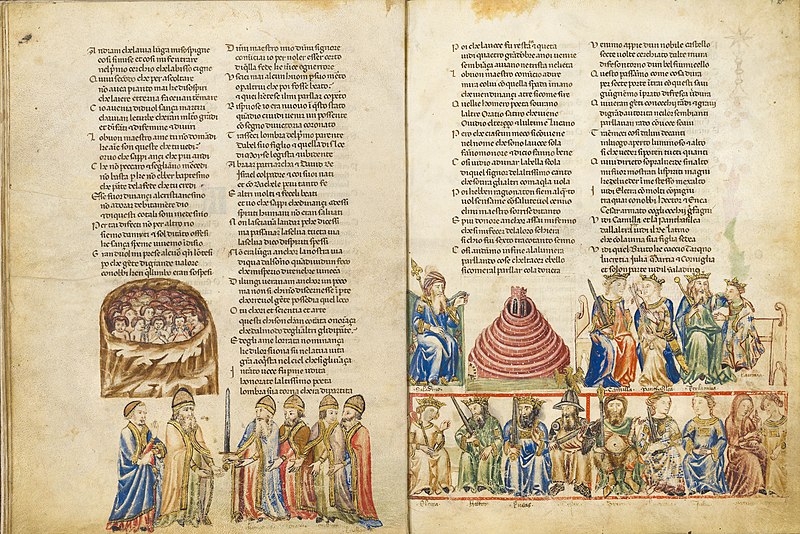 Historically, Limbo was seen as a holding-pen for the righteous people of the Bible until Jesus scooped them up during the Harrowing of Hell and took them to Paradise. Thereafter, it was designated for unbaptized babies.

Yet in Dante’s vision, we only find adults. Not a single baby or child appears, though he later affirms his belief in this second purpose of Limbo.

In Limbo reside all the lights of Antiquity, like Homer, Euclid, Julius Caesar, Lucan, Ovid, Horace, Diogenes, Galen, Ptolemy, Aristotle, and Hippocrates. There are also three Muslims, Sultan Saladin (who was renowned for his righteousness and magnanimity of character), Avicenna, and Averroës. Dante learnt about the latter two from his dear mentor Brunetto Latini, who got translations of their books while he was exiled in Spain.

Though as of 1300, the year the Commedia is set, Dante had only published one book, he’s nevertheless invited to join the noble school of Homer, Ovid, Horace, Lucan, and Virgil, and warmly welcomed as one of their own. The inclusion of Homer is particularly poignant, since Dante couldn’t read Greek. His love and respect of Homer was based on his reputation and partial Latin translations.

Dante also builds a beautiful castle for the souls in Limbo, and doesn’t subject them to any torments. They’re also the only people in Hell who wear clothes.

Through the entire poem, Dante struggles with the then-mainstream teaching that only baptized Christians can attain Paradise, no matter how righteous they were, even if they lived in a place where no one has ever heard of that religion, or if they lived before Jesus. He’s particularly upset about this because that means his belovèd Virgil will never leave Limbo.

He also says, in Paradiso, that it’s better to be an observant, committed Jew than an insincere, unrighteous Christian, and asks why Jesus’s death needs to be avenged (i.e., in the form of Church-sponsored antisemitism) when Christian doctrine teaches the Crucifixion was necessary.

This is one of those places where having supplementary study material is so important, since I didn’t interpret those passages that way at all in 2004. All I saw were a few comments that seemed like antisemitic jibes, and the deicide accusation really made me angry, since that’s the core of 2,000+ years of antisemitism and ultimately culminated in the Shoah.

Dante also believed other things we now know to be completely false, like the Donation of Constantine, that Cleopatra was a promiscuous harlot and not a serious ruler, that Pope Anastasius II was a heretic, and that Prophet Mohammad was originally a Christian and therefore a schismatic. That didn’t make him ignorant or bigoted, just a product of the Middle Ages. He had no reason to doubt the inaccurate history he was taught, since there were no counterexamples. 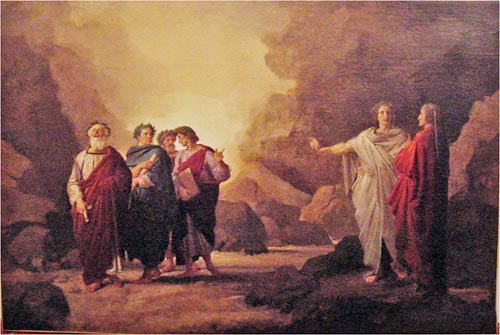 Dante diverges from popular antisemitic tropes and propaganda of his era by making all his usurers Christians. His own father was a moneylender, and so were many of his friends and acquaintances. In fact, there are no Jews in Hell at all except Judas and Caiaphas. Everyone else Dante encounters are Christians, so-called pagans, and a few Muslims.

Given how almost all popular depictions of Hell into the modern era featured grotesquely stereotyped Jews, it’s remarkable how Dante refrained from that.

Immanuel ben Solomon of Rome, a contemporary of Dante who was also possibly his friend, was so inspired by the Commedia, he wrote a Hebrew poem patterned on it.

Dante was greatly influenced by Classical Antiquity, and constantly blends it with Christian theology and his own imagination in Inferno. There are many “pagans” who show up outside of Limbo, and they’re all punished for their respective sins instead of condemned merely for not being Christians. E.g., Tiresias is with the soothsayers; Achilles is with the lustful; Ulysses/Odysseus (seen above in the William Blake painting) is punished for leading his men on an impossible voyage; and Capaneus (seen below) is punished with the blasphemers because he said Zeus couldn’t stop him from invading Thebes.

Dante also makes Cato the guardian of Purgatory, despite not being Christian (and a suicide to boot), and saves three other “pagans,” Statius, Trajan, and Ripheus the Trojan. Statius, his second-favorite writer, joins him and Virgil as they’re leaving the Fifth Terrace of Purgatory and accompanies them until the Earthly Paradise.

Ripheus and Trajan appear as lights in the eyebrow of a beautiful eagle composed of souls in Paradise. They were made Christians through God’s Divine grace.

Given the prevailing attitudes in Medieval Europe, Dante could’ve done a lot worse than making a beautiful castle for righteous non-Christians, saving a few of his favorites, and protesting the teaching that only Christians can attain Paradise.

One thought on “Religious minorities in The Divine Comedy”