Xenia is a code of hospitality originating in Ancient Greece, and is sometimes translated as “guest-friendship” or “ritualized friendship.” It’s the root of the million-dollar English adjective xenial, hospitable. Ultimately, it comes from xenos (stranger), itself the root of more familiar words like xenophobic and xenophile, and other words including xenograft, xenoblast, xenolithic, xenobiotic, xenogamy, and xenogeny.

Side note: It’s such a shame most primary and secondary schools no longer teach Ancient Greek or Latin, either as electives or mandatory subjects. So much of the English language comes from them, and it’s so easy to figure out the meaning of unfamiliar words or names when you know Latin and Greek. Command of one’s native language is greatly enriched by knowing the languages which most contributed to its development.

Xenia was taken very seriously by the Greeks. The above painting depicts Zeus and Hermes (Jupiter and Mercury) visiting an old couple in the city of Tyana (now Kemerhisar, Turkey), disguised as peasants. Baukis (the wife) and Philemon (the husband) were the only people who gave them a place to spend the night.

Though their cottage was small and simple, they nevertheless welcomed the strangers to their table and showered them with generosity far surpassing that of their rich neighbours who’d bolted their doors and treated Zeus and Hermes very abusively. 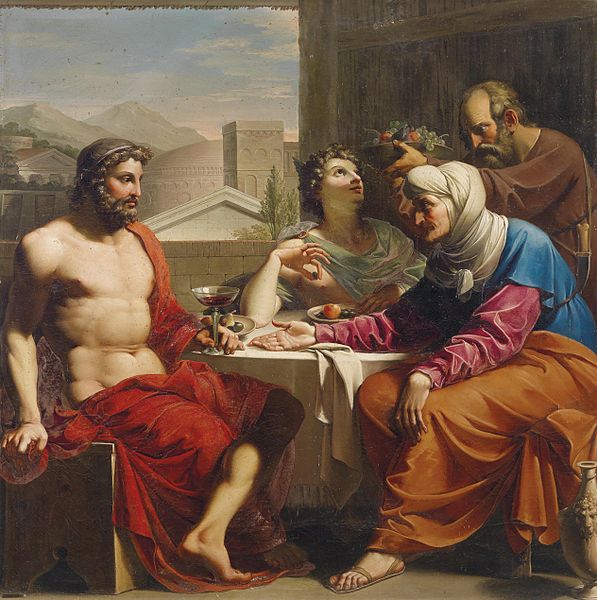 Baukis realised the visitors were gods when she saw the wine pitcher was still full, despite refilling the cups many times. Philemon wanted to kill their guard goose to feed these worthy guests, but it fled to safety in Zeus’s lap. Zeus told them not to kill their goose, and advised them to split town, since Tyana would be destroyed due to its lack of xenia.

The couple climbed a mountain with Zeus and Hermes, and when they were allowed to look back on the summit, they saw Tyana wiped out by a flood and their cottage transformed into a grandiose temple. They asked to be guardians of the temple and to die at the same time. Both wishes were granted, and they became intertwined oak and linden trees upon death.

For the Greeks, xenia wasn’t just a nice thing to do or the right thing to do, but a sacred moral obligation. It also created a reciprocal relationship between guest and host. The story of Baukis and Philemon demonstrates a special type of xenia, theoxenia.

Many religions and cultures have similar stories of gods, goddesses, sages, and saints disguising themselves in very lowly forms to test people’s righteousness and discover the measure of their character. Those who warmly, lovingly received the stranger, even when they barely had anything to give, are richly rewarded.

In return, those who grossly violated xenia, like Ixion (seen below), received terrible punishment. He murdered his father-in-law, and repaid Zeus for having pity on him and inviting him to dine at Olympus by making advances on Hera.

As Greek society grew more opulent and advanced, people with the means to do so created guesthouses and guest apartments stocked with ample food and drink, comfy beds, and lavish dining rooms. A xenodochium is a building for the reception of strangers, and the adjective is xenodochial. In Modern Greek, the word for “hotel” is xenodocheio.

The tradition of the xenodochium continued through the Middle Ages all across Europe and the Byzantine Empire, providing free room, board, and food to pilgrims, strangers, refugees, and Bubonic Plague sufferers.

During his almost twenty years of painful exile, Dante was the recipient of xenia in the many cities he stayed. He had to rely on the kindness and hospitality of strangers, though no city he passed through ever felt like his true home.