Ravenna, the northern Italian city where Dante was invited to live in 1318 and ended his days in three years later, has a long, rich history stretching back to the Roman Empire. Historians and archaeologists disagree on just which tribe settled Ravenna—Etruscans, Thessalians (from Thessaly, Greece), or Umbrians. There’s also a theory that the city’s name comes from Rasenna, or Rasna, the word Etruscans called themselves.

The Senones, a Gallic tribe, later settled in Ravenna, and laid it out very similarly to Venice, on a series of small islands in a lagoon. Initially, the Roman conquerors ignored Ravenna during their campaign in the Po River Delta, but eventually made it a Roman town in 89 BCE.

In 49 BCE, Julius Caesar gathered his troops in Ravenna before they crossed the Rubicon, and in 31 BCE, Octavian established a military harbour with defensive walls in nearby Classis. This harbour was an important part of the Roman Imperial Fleet.

Ravenna continued to go from strength to strength under Roman rule, and had a population of 50,000 by the time it became capital of the Western Roman Empire in 402. The Western Roman Empire fell in 476, and Ravenna became capital of the Ostrogothic Kingdom in 493. In the sixth century, it was chosen as the seat of the Exarch, Italy’s Byzantine governor. The Archbishop of Ravenna was second only to the Pope in Italy. Byzantine rule of Ravenna ended in 751, and gradually came under Papal authority. The city suffered a terrible loss when Pope Adrian I let Charlemagne rob Ravenna of anything he pleased, and an unknown amount of Roman mosaics, statues, columns, and other treasures were taken to Charlemagne’s court in Aachen.

In 1198, Ravenna led other cities in the Romagna region against the Holy Roman Emperor, but the Pope put down their rebellion. The noble Traversari family ruled the city from 1218–40. In 1248, Ravenna rejoined the Papal States, and later was returned to the Traversaris.

Finally, in 1275, the da Polenta family established their rule, which lasted till 1441. That year’s Treaty of Cremona annexed Ravenna to the Venetian territories. 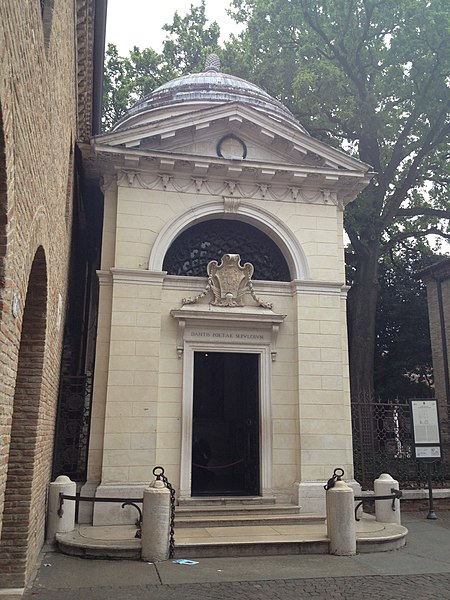 Venetian rule lasted till 1509, when the region was invaded during the Italian Wars. The French sacked Ravenna in 1512 during the Holy League Wars. Yet another period of Papal States rule followed, interrupted by another brief Venetian rule from 1527–29.

A huge flood severely damaged the city in May 1636. To prevent such a tragedy from recurring, authorities spend the next 300 years draining swamps and redirecting rivers.

In 1796, the Cisalpine Republic, a French puppet state, annexed Ravenna. Predictably, it returned to the Papal States in 1814. Piedmontese troops occupied the city in 1859. Ravenna didn’t win her freedom till the unified Kingdom of Italy was created in 1861.

Ravenna is gut-loaded with beautiful historic buildings, including many churches and tombs from the Early Middle Ages. Eight of its churches are UNESCO World Heritage Sites. The city also has many museums, art galleries, theatres, gates, and towers, as well as two amusement parks.

Dante’s tomb was built in 1780–81 at the Basilica di San Francesco. The Supreme Poet’s bones are in a Roman sarcophagus which was embellished with a bas-relief in 1483.

Florence (Firenze) has been begging for the return of their illustrious native son’s remains since 1396, but Ravenna has continually refused to send them home. Several times, the bones have been hidden to prevent this. Dante’s empty tomb in the Basilica di Santa Croce is still patiently waiting to be occupied. 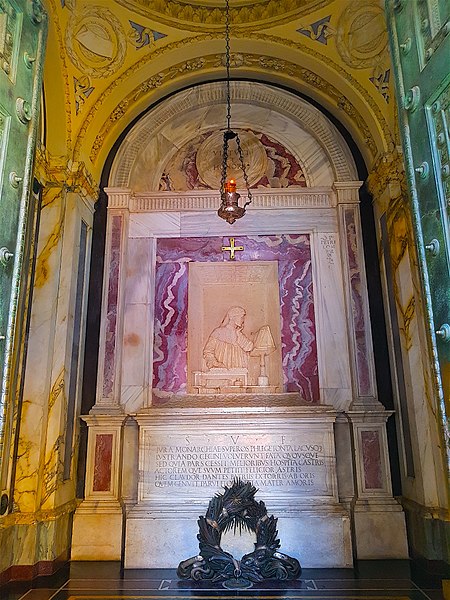 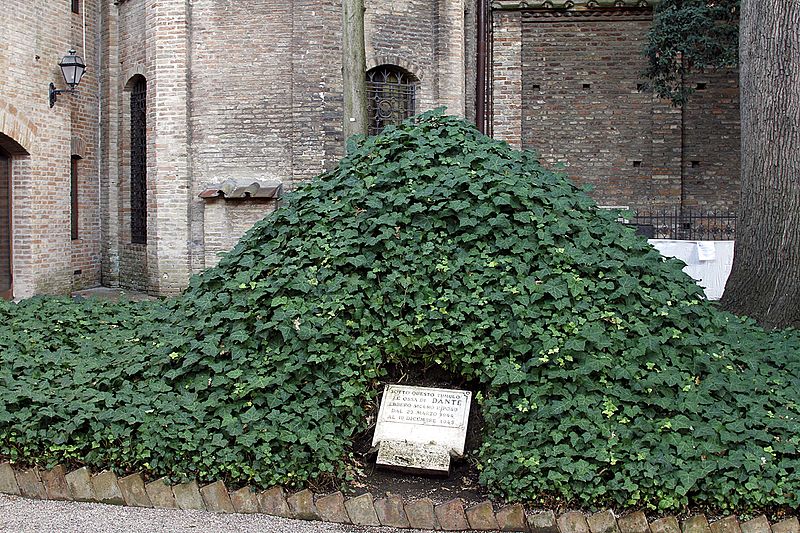