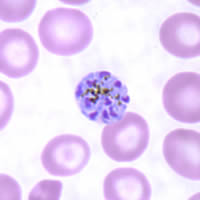 Quartan fever is one of the five forms of malaria which infect humans, caused by one of six parasites in the Plasmodium malariae species. It gets the name quartan from the fact that fever comes 3–4 days after being bitten. Only female mosquitoes transmit this particular strain.

When an Anopheles mosquito punctures human flesh, uninucleate sporozoites from the salivary glands enter the bloodstream. The sporozoites then attack and occupy the liver’s parenchymal cells (called hepatocytes). Upon maturation, the sporozoites become uninucleate merozoites.

Their next stage of development is as schizonts, or infected erythrocytes (i.e., red blood cells), which contain more merozoites. The schizonts rupture and release their merozoites, causing more and more infections in the human’s red blood cells.

Uninucleated merozoites can also become uninucleated gametocytes, which turn back on their creators, the mosquitos. If other mosquitos feed on this infected human, the merozoites in turn invade, occupy, and infect them, thus leading to even more sickened humans.

Afflicted patients have fevers at 72-hour intervals, whereas sufferers of other types of malaria have fevers every 48 hours or only sporadically. Fevers range from 104–106º F (40–41º C).

Signs of quartan fever include burning skin, welts, irritated spots, and hives. Some people may not display such symptoms, owing to built-up tolerance to mosquito bites. Welts in particular generally only appear if someone has severe allergic reactions.

In the modern era, quartan fever can be diagnosed through various types of blood tests and analyses under a microscope, as well as polymerase chain reactions. Treatments include chloroquine and hydrochloroquine. Pregnant women are given sulfadoxine-pyrimethamine.

Dante contracted quartan malaria in the marshy Comacchio Valleys in September 1321, while returning from a diplomatic mission in Venice. Once back in Ravenna, where he’d lived since 1318, he was nursed by his children Pietro, Jacopo, Antonia, and Giovanni.

Given the state of Medieval medicine, there were no antimalarial drugs. Dante may have been bled by doctors, or had leeches applied. He soon succumbed to the fevers wracking him, and passed away on 13/14 September 1321.

While churches did keep death certificates for their records, they didn’t record the exact time of death as they do now. Since Dante passed so late at night, there may have been confusion about which date it was. I like to think it was close to the time the 13th and 14th changed places, the veil between the two days.

Dante got a huge funeral, attended by Ravenna’s highest authorities and their families. He was mourned by the entire literary world, though Bertrand du Pouget (nephew of Pope John XXII) shamefully sought to burn his bones at the stake.

Though Dante’s native city has now rescinded the criminal charges against him and come to deeply regret exiling him, Ravenna still refuses to give back his bones.