The long-simmering power struggle between the rival Guelphs and Ghibellines came to a head on 11 June 1289, in the Tuscan plain of Campaldino. These two factions had been warring since 1125, with Guelphs supporting the Pope and Ghibellines backing the Holy Roman Emperor. 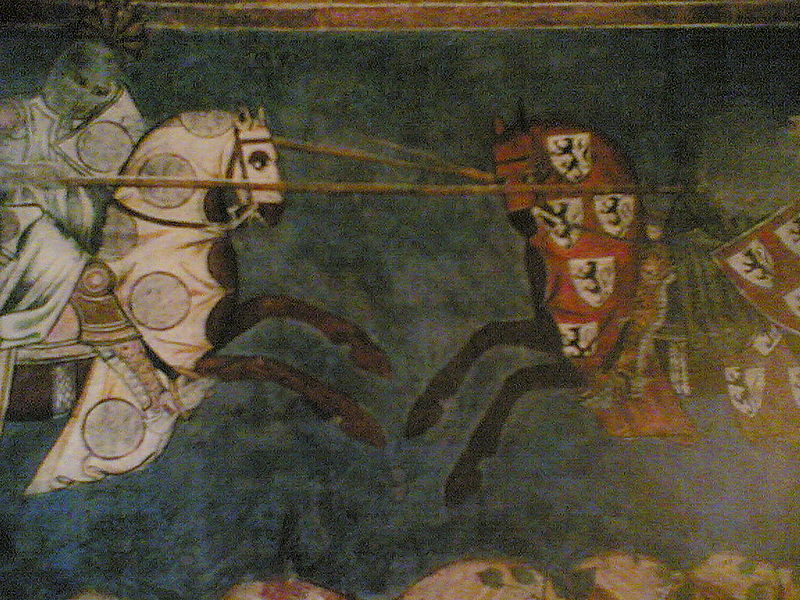 The Guelphs’ risky decision to pass through Casentino Valley on their way to Arezzo paid off. The locals were too taken by surprise to oppose the army’s passage. This forced the Ghibellines to fight in the field to avoid the castles being besieged and the countryside looted.

Since the Guelphs were there first, they were able to choose a defensive tactic, and put wagons with household goods at the back of their ranks. The Ghibellines decided to aim for the centre, which was composed of knights including 24-year-old Dante.

The Guelphs closed ranks and bore the full brunt of the assault. As the Ghibellines forced themselves deep into Guelph ranks, the mostly unhorsed Guelphs fought with axes, clubs, and swords. Dante panicked and fled the battlefield while this was going on.

The fight grew more and more disorderly, and devolved into one-on-one duels and fights. Then the archers sprang into action. The Guelphs’ arrows were more effective, since they were at closer range. The Ghibellines’ arrows came from a much greater distance, and also had to contend with dust and dry air.

The Guelphs gained the upper hand and closed in on the Ghibellines in pincer movements. This sent the Ghibellines into confusion and disarray, and they fled to the rear. Aimeric de Narbonne was wounded in the face, and Guillaume du Durfort was killed in action.

The Guelph reserves sprang into action, and soon the Ghibellines were surrounded and several more commanders killed in action. The Ghibellines’ reserves meanwhile fled. During the battle’s final stage, Guelphs took hostages to be exchanged for ransom and stole the enemy’s insignia, weapons, and equipment.

The battle ended when a storm broke out. About 1,700 Ghibellines had been killed, and 300 Guelphs. So many casualties were buried there in the field, their remains were still turning up as recently as 80 years ago.

The Guelphs’ victory assured their dominance in Florence, though later infighting between Black and White Guelphs created a new kind of trouble and condemned many people, including Dante, to exile.

5 thoughts on “The Battle of Campaldino”