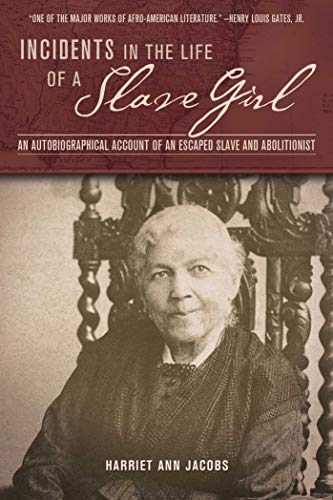 This was a long, slow read, and took forever for Ms. Jacobs to finally stay on the subject of her own life instead of unrelated side stories. The 19th century prose and euphemistic language also made it difficult to read. E.g., until I did some outside research, I thought her scuzzy master Dr. Flint (real name Dr. James Norcom) was raping her. He was guilty of some kind of sexual harassment, but not out and out rape.

I was also surprised at how frequently slaves in her town were able to buy their own freedom, or be sold to people who immediately freed them. The latter happened to her grandma, in whose house Harriet later hid for seven years before going North.

And speaking of those seven years, Harriet kept sending fake letters to Dr. Norcom with addresses from various Northern cities to antagonise him. When she’s finally in the North, guess what, he almost catches her several times, and later finds her in Boston!

Earlier, Harriet antagonised him by having two children out of wedlock with a much-older white man, believing he’d be so angry he’d sell her and she’d be free of his constant sexual harassment. WHAT! I don’t get that train of thought of all. And of course, he didn’t sell her, despite his anger and Harriet’s own shame at being an unwed mother.

The intended audience was white, Northern, Christian women of means, whom she hoped to appeal to and thus enlist to the abolitionist cause. It was originally published under the pseudonym Linda Brent, though it was really hard for me to imagine a 19th century woman named Linda.

Still, kudos to Harriet on sending her kids North and giving them a good education, escaping slavery, and making a better life for herself in freedom.

Talk about a dragging dud! This book started out so captivatingly, with lovely prose, but it quickly ground to a meandering standstill. Many things happened, but they never accomplished anything. The two protagonists don’t even meet till page 172! And it follows that annoying trend of alternating POV chapters.

It seems like someone chose NYC as a lazy default setting and wanted to show off her research of the city in 1899–1900. Why do so many writers immediately and only go to NYC for immigrant stories? How about Boston, Pittsburgh, Philly, St. Louis, San Francisco, Minneapolis, Dallas, even outside the U.S.?

Each respective Jewish and Syrian character is a clone of the other. It’s not even subtle. And there was such poor character development.

Speaking of characters, the forward momentum ground to a halt every time a new character was introduced, and there followed pages of detailed backstory. Why did I and many other writers spend so much time learning how NOT to write like that if apparently it’s still perfectly acceptable?

Even after the protagonists are named Chava and Ahmad, they’re still referred to as the Golem and the Jinni in the narrative.

We’re supposed to believe a well-heeled upper-class young lady like Sophia would leave her bedroom door unlocked in the hopes a strange man she just met might come to her mansion and deflower her?! I’m so tired of historical characters treating premarital sex like no big deal!

Of course it happened a lot, but people were much more discreet, and they stayed within their own social class to do it. Believe it or not, class stratification and consciousness in the U.S. used to be a much bigger deal, the way it still is in the U.K.

As someone who often writes at deliberate saga length myself, I’ve developed a keen sense of when length is justified by the story vs. when it’s an overwritten hot mess. The latter is true here.

Even a deliberately slower-paced, character-driven, episodic story needs hung on some kind of arc. Characters can’t just leisurely meander about doing and saying nothing of importance.

We’re supposed to believe the Jinni has never heard of angels?! They’re very much a part of Muslim theology!

Did the author, a woman herself, really have to be so awful to every single female character who enjoyed sex? Death, beating, enslavement, miscarriage, lifelong illness, abandonment. It’s one thing to present it as historically realistic, but entirely another when it’s accompanied by the attitude of “Oh well, those little harlots got what was coming to them! It serves them right for giving up their sacred maidenhood before marriage!”

Even when the Golem attempts passionate sex with her husband, she stops when she sees how horrified he is at a woman experiencing sexual pleasure!

It also perpetuates the repeatedly-debunked urban legend about names being changed on Ellis Island.

Still reading this book as of 31 December 2020, but I should finish very soon. It’s so fun and accessible, with lots of stories I’d not heard before, or wasn’t very familiar with. Some of these stories don’t directly involve The Beatles themselves, but are about the experiences of fans or people associated with them in some way (e.g., watching Ed Sullivan, writing fan letters, attending the same party).

Some obsessed losers on review sites have whined about how there’s barely anything new here. It must be nice to have read every single printed word about The Beatles and watched every interview for 50+ years. Most people don’t have time or interest for that, and not everyone is a first-generation fan.