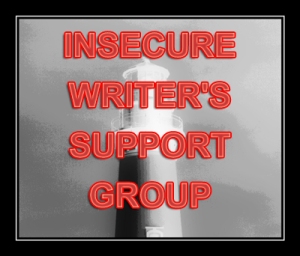 It’s time for another meeting of the Insecure Writer’s Support Group. The first Wednesday of each month, we share struggles, triumphs, quandaries, and fears. This month’s question is:

Are there months or times of the year that you are more productive with your writing than other months, and why?

In the past, I’d probably say autumn and winter, simply because I had more free time then, and had more opportunities to use one of the family computers when I didn’t have my own. Though it’s hard to say definitively after so many years. 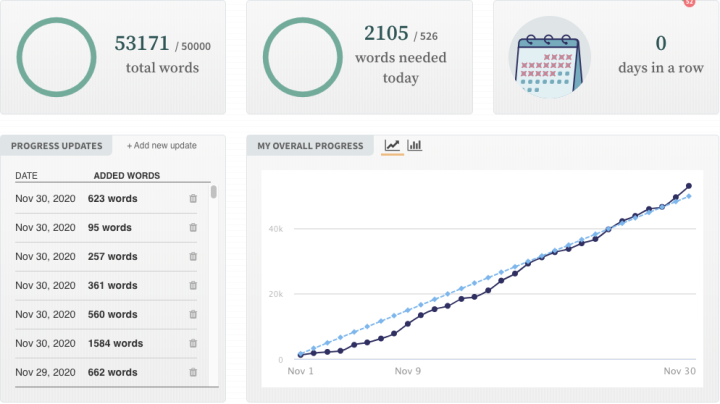 This is humiliating, given what I’m capable of under normal circumstances. I was as far as 7K behind at one point, only caught up on Day 25, and took till the final day to hit the bare minimum of 50K. To make it even worse, probably about half of my wordcount came from creative non-fiction (blog posts, journal entries, and Instagram posts), not my declared project.

Last year I hit 50K on Day 14, and did 101K total. My all-time best was 130K in 2018. Thanks to all in-person write-ins being cancelled, not being in my own home and thus having complete privacy and relaxation at all times, and being unable to go to the library six days a weeks to write for a few uninterrupted hours, I severely underperformed.

My usual daily wordcounts have been in the toilet since this apparently permanent lockdown began in March. Every day I grow angrier and angrier at the people excitedly cheering on the idea of at least another full year of these beyond draconian measures precluding any semblance of normal life!

I initially declared my project as The Very Next/The Very Last, but I didn’t even finish the new chapters of TVN. A lot of what I wrote was garbage, which I knew was garbage as I was writing it. Cluttery chat, false starts, repeatedly reworked lines, unnecessary fluff, dead on arrival scene openings, clunky wording, things that felt all wrong, even a huge portion of a chapter I ultimately realized, over 8,000 words in, would work a lot better in Almost As an Afterthought (the only book in the prequel series I’ve not yet renamed).

I was so excited to finally resume the radical rewrite of TVL, esp. since I left off with chapters about the 1940 Portuguese World Exposition and the 1939–40 World’s Fair. There’s a lot of all-new material to be written before I get back to rewriting and fleshing out pre-existing chapters.

By now it’s obvious TVN will finish up probably around 105K. The radical rewrite of 2015 brought it from a hot mess of 25K to 75K, but earlier this year I realised it wasn’t quite long enough. The Very First ended up around 90K, and the sequel felt a bit too short and simplistic in comparison. My original intent in 1996–97 was to have deliberately short, vignette-length, episodic chapters. While that style still works for some of them, others greatly benefitted from lengthening. The four all-new chapters are of more substantial length.

It’s also natural for books in a coming-of-age series, or the succeeding parts of a Bildungsroman book, to gradually increase in length, depth, maturity, and sophistication. I’ve come to see that I underwrote a lot of my Atlantic City books. They’re generally much shorter than my adult books by design, but I made them too short.

If lockdown ever ends and I’m able to finally be back in a home of my own, I intend to overachieve like normal in NaNo 2021, and get back to my former daily wordcount range of 2-5K.

If you did NaNo, was it a wash or a success?