Inspired by the success of Son of Frankenstein, Universal decided to create a sequel to The Invisible Man. In March 1939, they began searching for the right screenwriters and director. Finally, they settled on Curt Siodmak and Lester K. Cole as writers, and Joe May as director. Mr. May was a pioneer of German film, and escaped to the U.S. in 1933 after the Nazis came to power.

Though there’d been hints of Boris Karloff or Béla Lugosi playing the lead, Universal wanted an unknown actor, a “young, good-looking contender even though he would remain invisible until the last reel.” 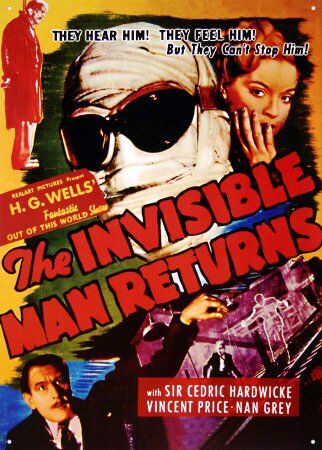 Filming began 13 October 1939 and was supposed to last 27 days, with a budget of $243,750 ($4,564,262.59 today). However, they were behind schedule by the second week, and by November, everyone was working till midnight. There was scant expectation of wrapping on schedule.

Production ended 11 November 1939, followed by a projected few days of post-production for special effects. Once again, they went over, and post-production lasted fifteen days. On the final day, the crew worked till 4:15 AM.

After more and more time ticks by without any happy news, Dr. Frank Griffin (John Sutton), brother of the first Invisible Man, Jack, goes to see him in prison.

During this tightly-supervised ten-minute visit, Geoffrey mysteriously vanishes into thin air, leaving his clothes behind. With the authorities convinced he’s the real murderer, a manhunt is launched. In the wake of Geoffrey’s disappearing act, Helen also vanishes. 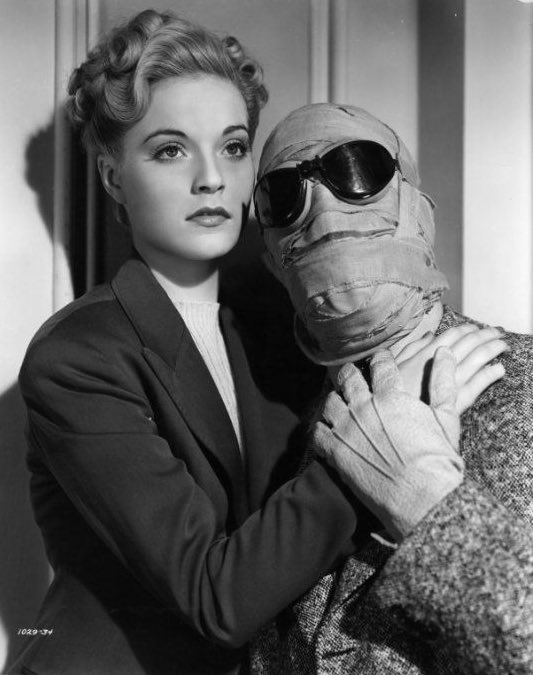 Geoffrey meets Helen at the remote home of Ben Jenkins (Forrester Harvey). Helen hopes they can hide out there safely until Frank discovers the antidote, but Geoffrey won’t rest easily till the real killer is found.

Though there’s no one else around for miles, Geoffrey is extremely on-edge from the incessant barking of Ben’s dog. Helen makes Ben chain him up far from the house.

The dog attracts the attention of a cop bicycling through the woods. He’s still barking crazily when the cop arrives at the house. A fight breaks out, with the cop suspecting Ben has visitors and demanding to search the house.

Against Ben’s agitated attempts to block the cop from going upstairs, Geoffrey is discovered. The cop runs back downstairs to phone for help, and is told to not let Geoffrey take off his clothes no matter what.

Geoffrey does just that and escapes out the window before the cop and Ben return.

Geoffrey wastes no time in going to Frank’s lab. Frank has been working busily hard on the antidote, and recently had success with a guinea pig. Now he manages to take a blood sample from Geoffrey, despite his invisibility, to use in the next version.

Geoffrey’s suspicions are triggered when Willie Spears (Alan Napier), the new superintendent of the Radcliffes’ coal mine, visits the lab. Based on what Spears says, Geoffrey has reason to believe Cobb (his cousin) is the real killer. Not wasting a moment, he perches on Spears’s car and stalls it in the woods.

Spears is terrified when Geoffrey makes himself known. First he thinks he drank more than he was aware of, then thinks it’s Satan. Geoffrey chases him through the woods, taunting him and saying there’s no escape.

Fueled by terror, Spears makes a full confession and says Cobb would’ve killed him if he told authorities what really happened. He begs for mercy, and it looks like Geoffrey is satisfied.

Until, that is, Spears is ambushed in his house after packing a suitcase. Geoffrey ties him up and says he’ll be back after settling a score with Cobb.

Now begins a calculated campaign to prove Cobb’s guilt to the authorities and take revenge, all while Frank continues trying to find an antidote before Geoffrey goes mad like Jack.

One thought on “Meddling anew in things best left alone”