As always, my yearly October salute to vintage horror films celebrating landmark anniversaries kicks off with grand master Georges Méliès. This year, I’m fêting four films from 1900 and one from 1905 (respectively 120 and 115 years old). Obviously, the horror/fright element is nowhere near comparable to that in a more modern horror film, but we need to judge films by the standards of their era. Retroactively applying modern sensibilities to things from bygone eras is an exercise in foolishness and obliviousness.

The Cook’s Revenge (La Vengeance du Gâte-Sauce) released sometime in 1900. Due to the nature of the cinematic industry in its infancy, we don’t always have exact dates or even cast lists. This film was long believed lost, but finally resurfaced in Manosque, France.

A saucier (Méliès) attempts to kiss a waitress in the kitchen, and she drops a stack of plates from shock. To avoid being blamed, he jumps into a cupboard to hide and leaves her looking like the guilty party. After she’s fired by the head waiter, things quickly go from bad to worse. The saucier is beheaded when the head waiter closes the cupboard door, and the macabre horrors keep increasing. 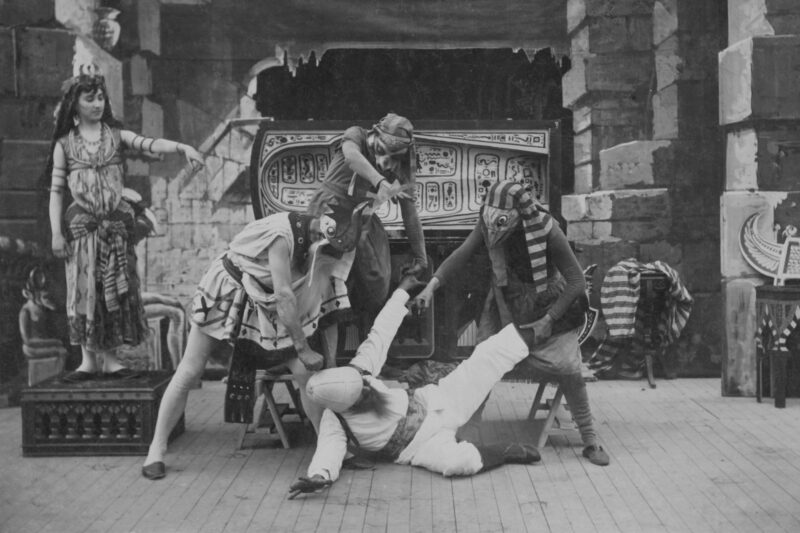 The Misfortunes of an Explorer (Les Infortunes d’un Explorateur ou Les Momies Récalcitrantes), also from 1900, survives only in a fragment of about 20 seconds. An English explorer (Méliès) enters a sarcophagus in an underground tomb and inadvertently unleashes a ghost. This ghost then becomes a vengeful goddess who summons three Ancient Egyptian monsters who attack the explorer and seal him inside the sarcophagus. The goddess presently sets it on fire. When she stops the fire, the explorer escapes. 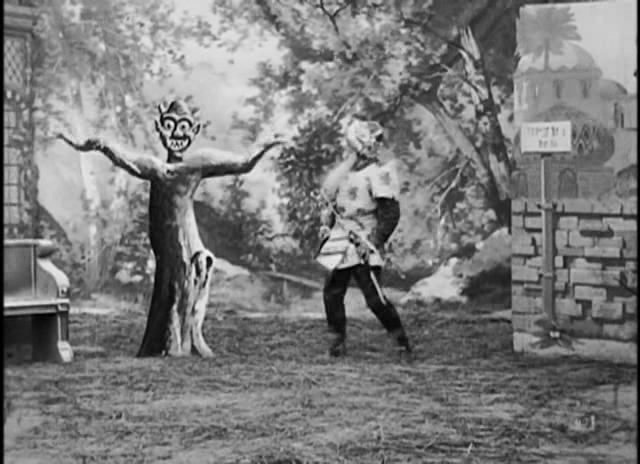 The Rajah’s Dream (Le Rêve du Radjah ou La Forêt Enchantée), another 1900 entry, was available in a hand-coloured print like about 4% of Méliès’s other films. These prints fetched a higher price when sold to film exhibitors.

A Rajah’s sleep is disturbed by a butterfly, which he tries to catch in vain. After he gives up and returns to his bed, he magically finds himself in a park. The chair he tries to sit in keeps vanishing out from under him and moving all around, before turning into a dead tree, a monster with moving arms, a demon, a boxer, and finally a parade of lovely ladies.

The Rajah’s hopes of romantic fun are dashed when the ladies transmogrify into an attempted beheading party!

The Wizard, the Prince, and the Good Fairy (Le Sorcier, le Prince, et le Bon Génie), our last 1900 film, features a prince who visits a sorcerer. Presently the magic tricks commence—a vanishing table, a cauldron transmogrifying into his sweetheart, the lady vanishing. The prince wanted more time with his girlfriend, and tries to kill the sorcerer with a sword.

In revenge, the sorcerer turns the prince into a beggar and summons a crowd of women in bizarre, creepy costumes. The prince begs them for his life, and he’s finally able to leave with his sweetheart, while the sorcerer is locked in a cage.


The Black Imp (Le Diable Noir), from 1905, exists in two different versions. It’s the story of an imp who makes mischief in a hotel room, jumping about and making things appear and disappear. He makes even more mischief when a respectable lodger (Méliès) arrives, though the imp is now hidden from view. His antics reach their height when the bed is set on fire. Everyone is shocked when he reveals his presence.