Umiko Hamasaki and Mizuki, daughter of her household’s senior lady-in-waiting, are on a mission to find friendly yokai who’ll lead them to Shoki, a great slayer of disease demons. They’re now in a temple occupied only by one elderly woman, who invited them to dine along with their horse Ayumu. Though they forgot to bring their bag with chopsticks into the room, they’re game enough to eat with their hands. 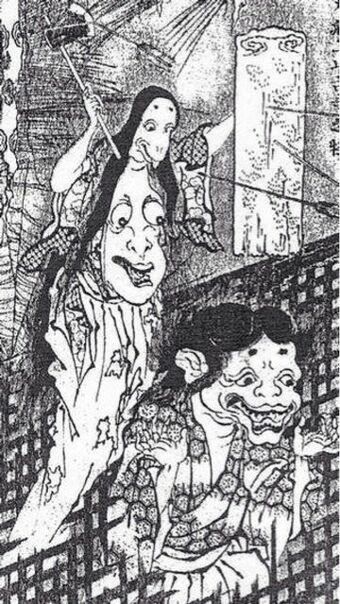 Haradashi, one of the few friendly yokai

Umiko looked at her food for a few very long moments before reaching into the bowl of stewed daikon leaves and bringing a handful up to her mouth. She then ate a handful of rice and salmon, followed by drinking the miso soup straight from the bowl. As she set the soup bowl down, the elder pulled her robe away from her midsection to expose a silly face on her enormous stomach and began an equally silly dance.

“Indeed I am.” Haradashi continued dancing with random, silly steps, none of them related to one another or with any sort of pattern.

“How much gold do you want for your hospitality, Haradashi-sama?” Mizuki asked. “We should have enough to cover a night’s lodging plus food.”

Haradashi brushed a long lock of hair out of her eyes. “There’s no need to pay me. It’s my duty to help people and cheer them up. Where are you going after you leave?”

“Good luck with that. That demon has been terrorizing our land for too long.” Haradashi lit another stick of incense. “I know of no magic strong enough to vanquish Hososhin forever, but keeping him away for a long time and minimizing the number of his victims will be victory enough. Perhaps someday your descendants shall discover magic we can only dream about, and Hososhin will become as much a part of foggy, ancient history as Emperor Jimmu and Amaterasu’s creation of Japan.”