Umiko Hamasaki and Mizuki, daughter of her household’s senior lady-in-waiting, are on a mission to find friendly yokai who’ll lead them to Shoki, a great slayer of disease demons. They’re now taking shelter from the rain in a temple occupied only by one elderly woman, who’s invited them to dine along with their horse Ayumu. 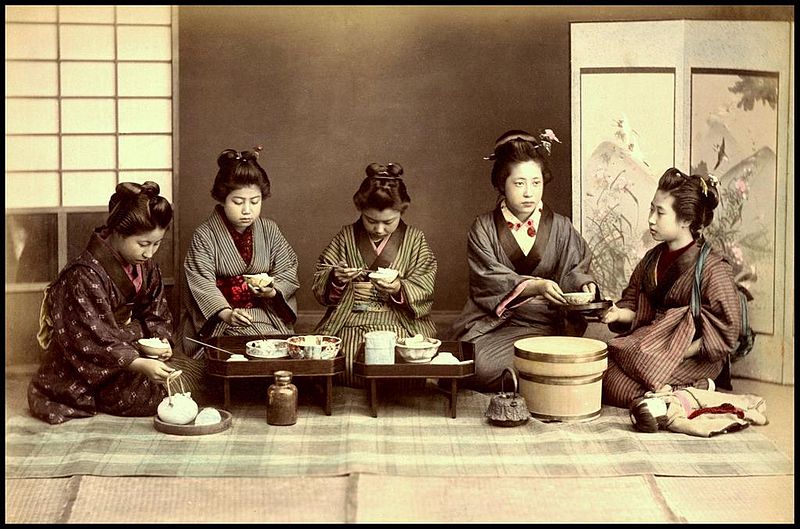 Mizuki picked up the rolled-up clothes, and the elderly woman led them down a long hall lined with statues of Buddha in gold, silver, stone, marble, bronze, and wood, until they reached a large room near the back of the temple. An irori, a sunken hearth, blazed away in the middle of the room. Delicious scents seeped forth from several pots and a teakettle. The room was also filled with the aroma of jasmine incense. Along the back wall were two piles of straw mats topped by long, thick, red silk cushions.

“If you don’t like miso soup, stewed daikon leaves, and rice mixed with salmon, I can prepare something else,” the elder said. “You also have sweets to look forward to.”

Umiko looked at her curiously. “Don’t all Buddhist monastics abstain from animal products?”

“I cook what I know my guests will eat, and there’s no law prohibiting the killing and eating of fish. As long as one doesn’t eat without gratitude to the animals for their noble sacrifice, I don’t see why it should be avoided.” The elder stirred her pots. “A healthy diet also requires variety, and most people would quickly starve or become bored if they ate nothing but rice, fruit, and vegetables.”

5 thoughts on “WeWriWa—Invited to dine”