Umiko Hamasaki and Mizuki, daughter of her household’s senior lady-in-waiting, are on a mission to find friendly yokai who’ll lead them to Shoki, a great slayer of disease demons. After a few days in the forest, under the protection of Baku, they’ve emerged into a lush grassland. When rain began coming down, they hightailed it towards the nearest building. 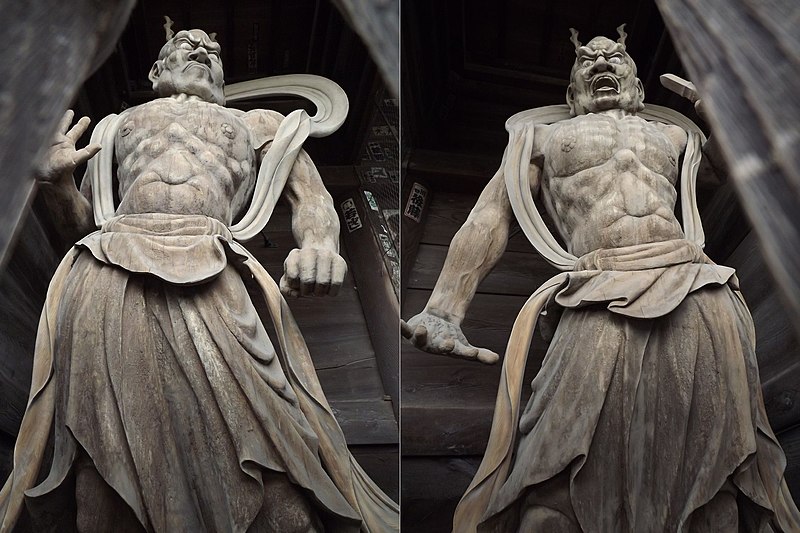 Ayumu came to a stop in front of a temple matching the one on Shinobu’s map. Rain came down more and more heavily as Umiko dismounted Ayumu and made her way to the gates. On either side were Nio, muscular images of Buddha. The statue on the right had an open mouth, and the one on the left had a closed mouth.

“Should we take Ayumu inside?” Mizuki asked. “Animals have the potential to reach Nirvana just as humans do, and could’ve been loved ones in former lifetimes.”

“It’ll be worse to leave her outside,” Umiko said. “We’ll only stay here until the rain stops.”

Rain began pounding heavily upon the roof as soon as they were in the main hall. Some of the rain gushed in through cracks in the stone walls.

The ten lines end here. One more is below.

No other sounds could be heard, and Umiko didn’t sense the presence of anyone else, animal or human.

3 thoughts on “WeWriWa—Entering the temple”