Umiko Hamasaki and Mizuki, daughter of her household’s senior lady-in-waiting, have set off on a mission to find friendly yokai who’ll lead them to Shoki, a legendary doctor in Ancient China who’s now renowned as a great slayer of disease demons. Umiko’s three-greats-grandma Shinobu gave them an illustrated map and explained what they have to do. 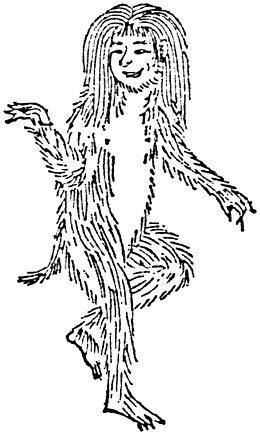 Though the beach had been deserted since Hososhin began his reign of terror, today there were many people playing in the waves, dancing in the sand, singing, and drinking. When Umiko looked closer, she realized those weren’t people at all, but shojo, an orange-haired, orangutan-like race of sea-spirit yokai.

“Hello, my young friends,” a shojo in a seaweed robe greeted them. “Would you care for some of our brine wine? We brewed it from the seawater.”

“Where do you live?” a short shojo asked.

Umiko pointed behind her. “After Hososhin arrived, everyone began falling ill, and we were removed to the smallest guesthouse with my esteemed great-great-great-grandmother almost two weeks ago. It’s the only remaining place free of Hososhin.”

4 thoughts on “WeWriWa—Meeting the shojo”