This week I’m switching to something completely different. Last year I wrote a short story called “The Search for Shoki” for a contest, with the mandatory genre of middle grade historical fantasy. It was the very first time I wrote fantasy that I can remember.

The story is set in 737 Japan, during the last year of a smallpox epidemic which started in 735 and killed one-third of the population. No one was immune, not even the Emperor’s family.

Sousobo means “great-grandmother,” and ue is an honorific meaning “above.” Ue denotes a very high level of respect. Today, it’s usually only appended to reverent words for members of one’s family. 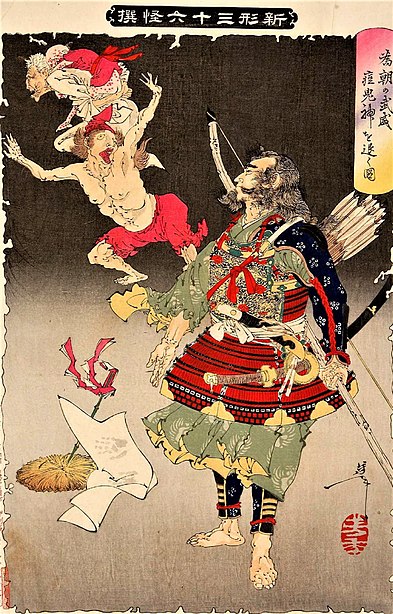 Tsukioka Yoshitoshi, Driving away the Demons, October 1890. From the Thirty-six Ghosts series. 9.25″ x 14.25″. The print depicts Minamoto no Tametomo driving away demons. From here.

Hososhin, the smallpox demon, had been stalking the Land of the Rising Sun for two relentless years. No amount of dogs or red objects could defeat him. A mere two weeks after his arrival in the House of Hamasaki, thirty people were stricken, leaving only twelve-year-old Umiko, her great-great-great-grandmother Shinobu, and the senior lady-in-waiting’s daughter Mizuki.

“Perhaps these are but the ramblings of a decrepit old woman who’s lived a century, but while I was painting this morning, I thought of an idea for defeating Hososhin,” Shinobu announced during a dinner of fermented soybeans.

“You’re not decrepit, Sousobo-ue,” Umiko said. “Your mind always overflows with wisdom, and you move with so much ease. I hope I’m so active and healthy when I’m one hundred.”

Shinobu looked out the windows. “There are many yokai who live nearby, some quite powerful and helpful. If you encounter the right ones, they may bring you to Shoki, a great slayer of Hososhin.”