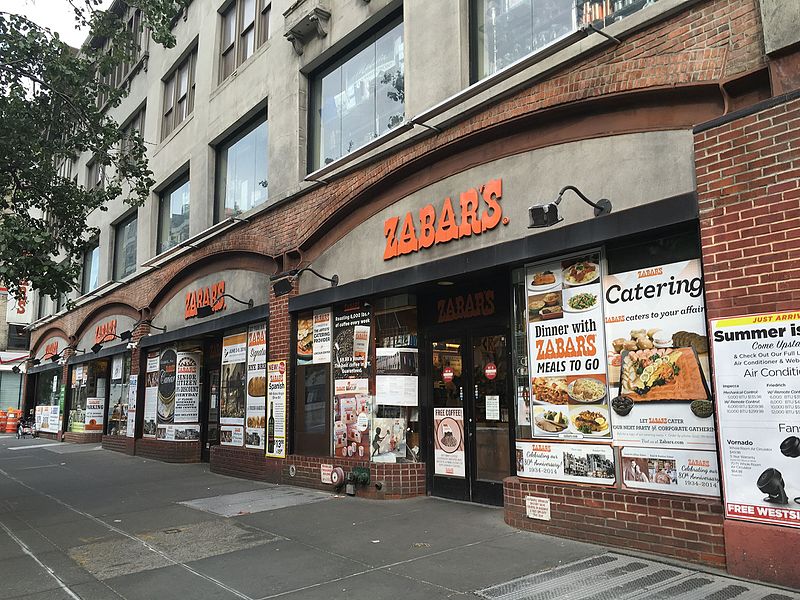 Zabar’s is a specialty food store which opened in 1934 and moved to Broadway between 80th and 81st Streets in 1941. The building started life as the Calvin Apartments, four three-story structures erected in 1882, and stood out like a sore thumb among the elegant, freestanding mansions which characterized upper Broadway at the time.

In 1890, developer Christian Blinn sold it to real estate investor Julia Schwarz, and in 1892, he entered a loonybin. He filed suit against her in 1901, claiming he’d been insane and had no knowledge about the sale.

The jury couldn’t decide, so the judge ruled in favor of Ms. Schwarz. 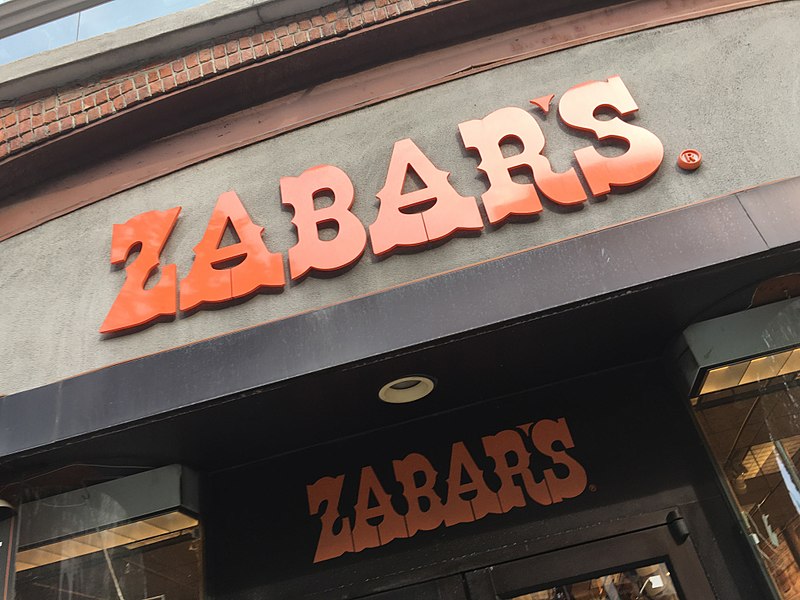 In 1919, Ms. Schwarz leased the building for $30,000 a year to the C&L Lunch Company, and commissioned architects Whinston & Whinston to remodel and combine the four buildings into one complex. A small apartment on the next lot north, built 1890, was also included.

The Tudor-style Calvin Apartments opened in 1920. In addition to being beautifully decorated both inside and out, they promised on-premise dining. They were very expensive, with two-room apartments going for $165 a month ($2,134.09 today).

In the 1920s, the average NYC rent was only $40 a month, and houses sold for $15 a square foot. Not exactly apartments intended for normal people!

Louis Zabar was born in Ukraine in 1901 and came to the U.S. via Canada in the early 1920s, after his dad was murdered in a pogrom. Lillian Teit was probably born in 1902 or 1903, though she pretended to be younger when she immigrated from Ukraine in the mid-Twenties, fearful she’d be deported for being too old.

Lillian lived with relatives in Philadelphia, and Louis lived in Brooklyn, where he rented a stall in a farmers’ market. Later, Louis became head of a grocery’s smoked fish section. When Lillian moved to NYC, she and Louis renewed their old acquaintance from their hometown and married 2 May 1927.

They started a deli in Brooklyn, selling Lillian’s wonderful homemade foods, among them stuffed cabbage, blintzes, coleslaw, and potato salad. When the couple moved to Manhattan, they set up shop in the third building north from 80th St. in the old Calvin Apartments. By that time, the complex had become a hotel.

By the time of his death in 1950, Louis owned ten Manhattan markets.

Oldest son Saul (born 1929), a med student at the University of Kansas, came home to help the family business. He thought he’d only be there for a few years, but it turned into the rest of his life. Saul became the store’s president, and middle brother Stanley became vice-president after graduating the University of Pennsylvania.

In 1953, entrepreneur Murray Klein (1923–2007) joined Zabar’s and began transforming it from a small deli to one of the city’s most renowned specialty markets. He started as a floor sweeper and stock clerk, and quit several times, but eventually became a full partner in 1960.

In the 1970s, there were plans to buy a building on the west side of Broadway between 82nd and 83rd Streets, but hashgacha pratit (Divine Providence) enabled them to buy the entire former Calvin Apartments instead and expand that way. They also gained the rooms upstairs, which were once the Cedar Hotel.

Mr. Klein knew the store’s core clientele and most loyal customers were Ashkenazic Jews who went there for things like lox, pastrami, bagels, and babka, but he also knew good businesses need to draw more than one demographic.

To gain the patronage of a wider patronage seeking sophisticated food, he offered things like brie, caviar, white truffles, and gourmet chocolate. He also began selling household wares. Even more unusually, he sold at below-market prices and at a loss, even for luxury foods. 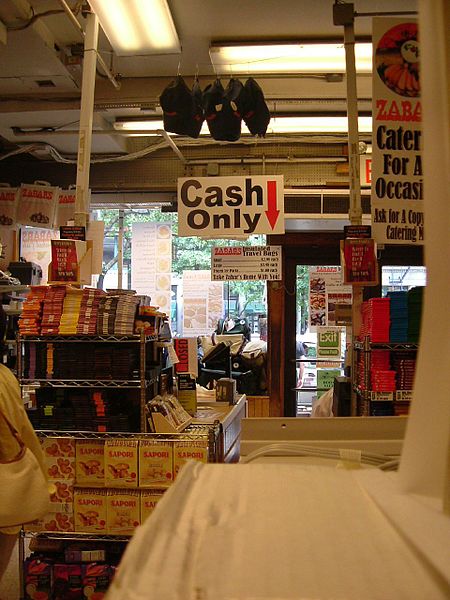 Zabar’s hasn’t yet featured in my books, but I look forward to including it.