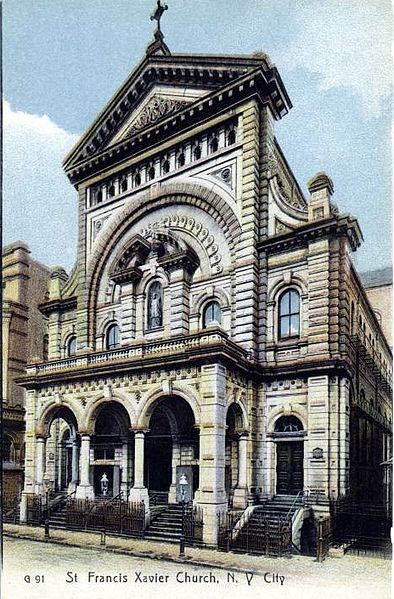 In the summer of 1847, English-born Jesuit priest John Larkin was dispatched to create a church and school in New York City. He initially worked in Fordham, the Bronx, but Archbishop John Hughes thought he had what it took to survive that “rough, extraordinary city.”

It took an entire day to travel to downtown Manhattan, and Father Larkin only had fifty cents ($15.77 today).

The next day, Mass was offered for the success of this mission. In attendance was a newly-immigrated French muralist who wanted to thank God for his family’s safe journey. After Mass, he told Father Larkin he’d heard U.S. banks weren’t reliable, and asked how to keep his money safe. 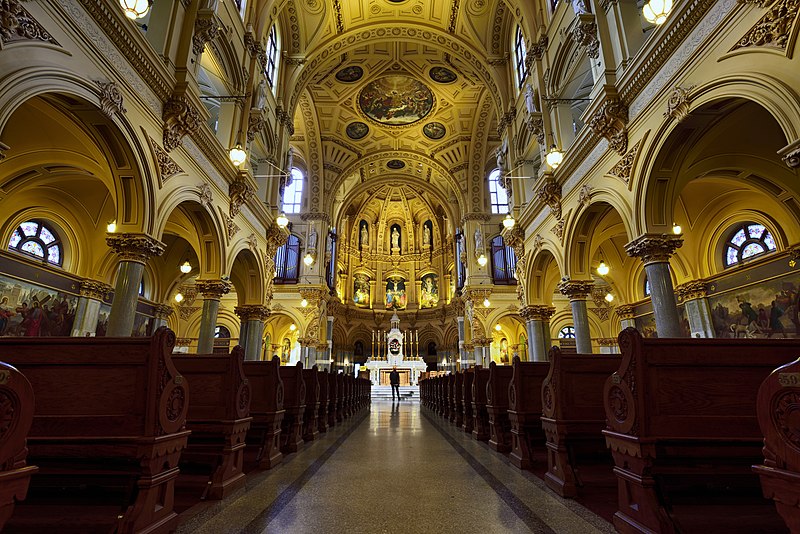 Divine Providence continued shining for Father Larkin. A Protestant church between Bowery and Elizabeth Streets had just gone on sale for $18,000 ($567,829.76 today) after a big schism, and asked $5,000 as a down payment.

Father Larkin promised the good Frenchman security for his money in return for a mortgage on that church, and the church was dedicated in October. Sadly, it burnt to the ground in January, and Father Larkin was asked to return to Fordham.

Despite this tragedy, the congregation rallied behind him to rebuild their church. A surprising source of spiritual fortitude also came from a seemingly chance encounter in The Bowery. 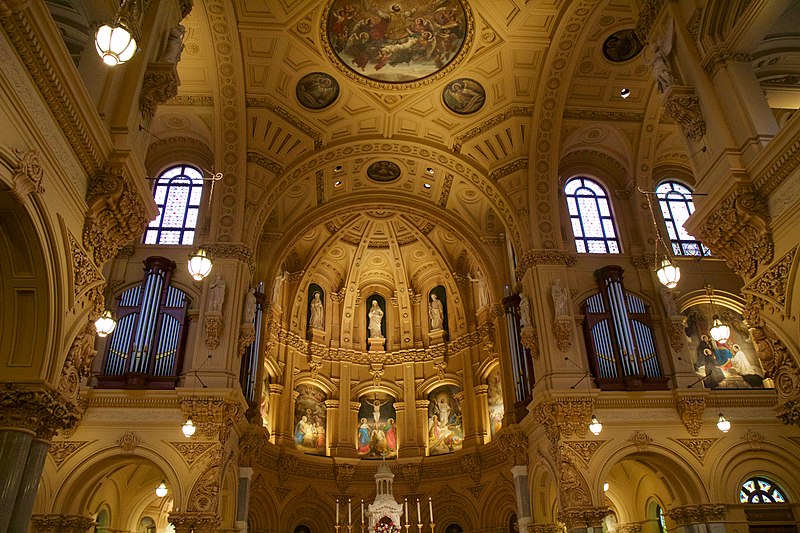 Shortly after the fire, a woman selling apples approached him and said, “Well, Father Larkin, so your church is burnt; the Lord be praised!”

Not quite sure what he was hearing, he said, “‘The Lord be praised!’ Are you then glad of it?”

“Oh, God forbid! But then we must give God glory for everything.”

Father Larkin realized she was right, as painful as this situation was, and resolved to take this lesson to heart. The apple seller then lamented being unable to donate any money, since she was a poor widow with five kids, but insisted he take her two finest apples.

And from that moment on, the congregation endeavoured to give God glory for everything, good things as well as bad. 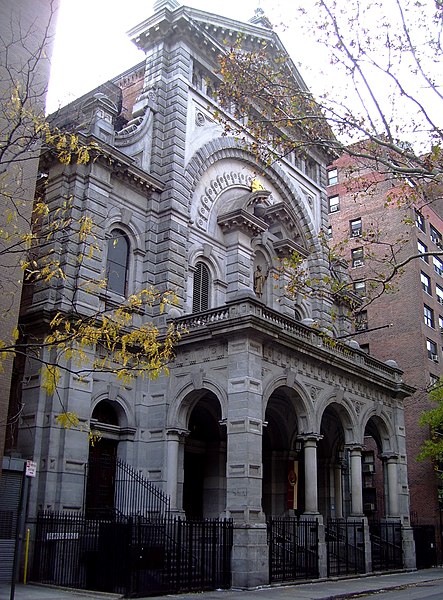 Father Larkin refused to abandon his congregation, and held Mass in borrowed spaces till 1851, when a new church, designed by William Rodrigue, opened on West 16th St., next to the old church. During this time, Father Larkin declined an offer to become Bishop of Toronto.

Tragedy struck again on 8 March 1877. During a women’s mission, a fire erupted in the packed sanctuary, and panic broke out. Six women and one child died, and the church was gutted.

This happened in part because the church had become too small to comfortably accommodate the entire congregation, since so many people from Catholic countries were immigrating in that era. A new building was needed anyway. 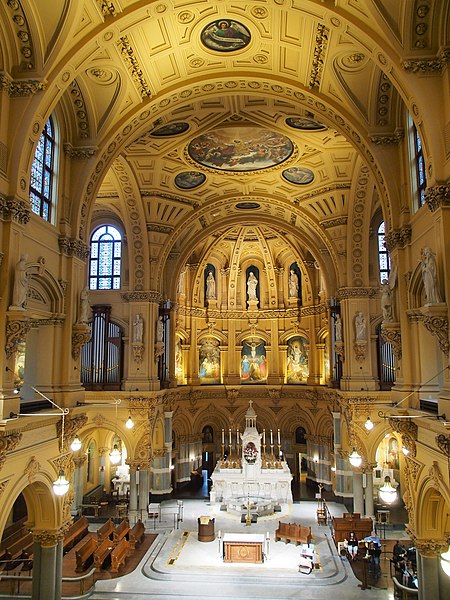 In May 1878, the cornerstone for a new church was laid immediately to the west, with 5,000 in attendance. Famous architect Patrick Charles Keely designed it in Roman Basilica style, with a bluish-grey Neo-Baroque façade and gabled portico. His frequent collaborators the Morgan Brothers designed the stained-glass windows in Pre-Raphaelite style.

William Lamprecht, the country’s leading ecclesiastical painter of the era, made almost 50 murals. The beautiful marble, in a rainbow of colors, came from Italy; the onyx came from Mexico; Massachusetts provided granite; and New Hampshire gave the cornices and columns. 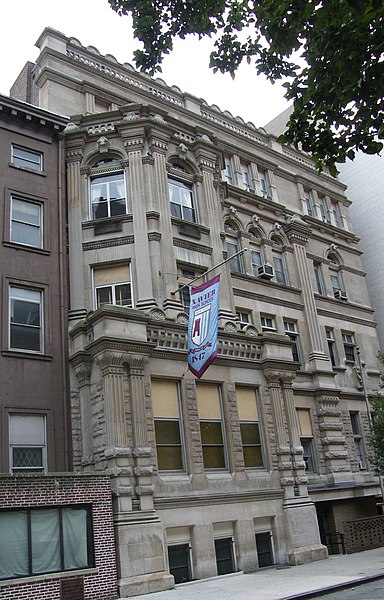 Every Catholic church has a school, and St. Francis Xavier Church has Xavier High School, also founded by Father Larkin. When he founded what was originally called the College of St. Francis Xavier, he only had five cents left ($1.58 today).

At the time, Father Larkin was also a professor at St. John’s College in Rosehill Manor, now Fordham University in the Bronx. His two schools played the first collegiate baseball game in 1859. Fordham won 33-11.

In 1861, after Father Larkin’s death, the high school was chartered by the state. 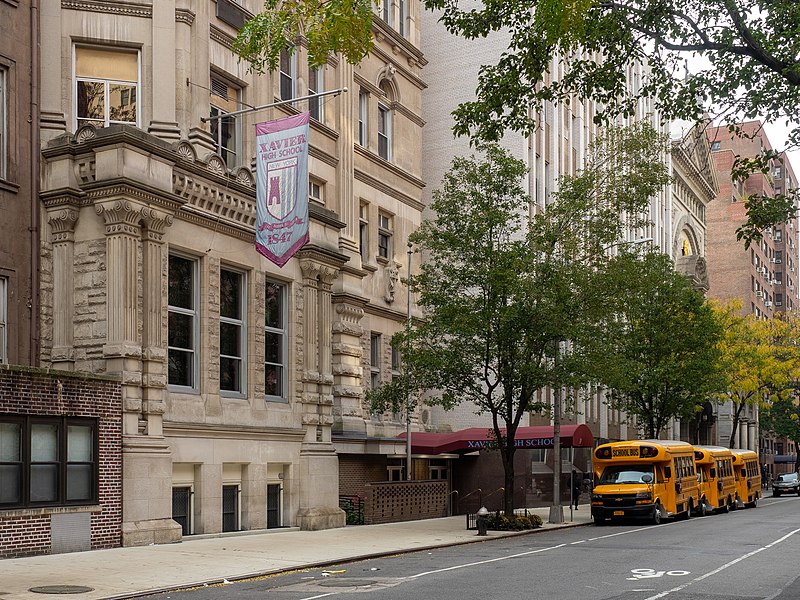 The National Guard began military training at Xavier High School in 1886, and membership became mandatory in 1892. In 1897, collegiate and secondary studies were separated into different departments. The former closed in 1912.

In 1935, the student regiment became Junior ROTC, and the school was declared a military institute in 1968. Not till 1971 did participation in ROTC become optional. 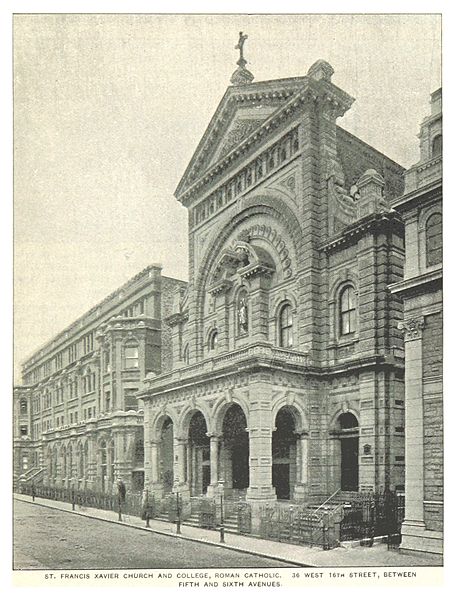 I’ve not used either school nor church in my writing to date, but now I’m quite eager to make St. Francis Xavier the church of my Novak family when they move to New York in 1952.