Walden School was a progressive, popular, innovative school on the historic Central Park West, founded March 1914 by Margaret Naumburg (1890–1983). While travelling Italy with her Barnard roommate Evelyn Dewey and her parents, progressive education pioneers John and Alice Dewey, she learnt under Maria Montessori.

She also studied education under John Dewey as a Columbia grad student. Though Columbia wasn’t properly co-ed till 1983, women were long accepted in the master’s and doctoral programs.

Fertile ground was thus planted for a new type of school, one not rigidly focused on formal textbook learning and a specific curriculum. Ms. Naumburg believed strongly students learn best by developing and following their own passions, and naturally absorbing information and knowledge.

The Children’s School, as it was originally called, had ten pupils and two teachers in a single room. Ms. Naumburg said, ”The purpose of this school is not merely the acquisition of knowledge by children. Its primary objective is the development of their capacities.”

In 1922, it was renamed Walden School, and eventually moved to 1 West 88th St. and Central Park West. Many people were off-put by such a radical-seeming school at first, but it went on to win much respect and renown.

There was no assigned seating, and teachers were called by first names. Even more radically, there were no grades, interviews took the place of entrance exams, and there was no formal preparation for college.

Students had great leeway in choosing their own course of study, and the visual and performing arts were emphasised. Walden frequently held art shows, musicals, panel discussions, and public demonstrations of science, arts, crafts, and wood shop.

Teachers got to know students as individuals, and tailored instruction to their strengths and needs. In keeping with its progressive principles, Walden was desegregated. Though it was a private school with tuition, this wasn’t a bastion of upper-class WASP privilege like certain other city schools.

Walden was particularly popular among intellectual, artistic families from the Upper West Side and Greenwich Village. Some students also came from other boroughs, and scholarships were available. By the 1970s, there were 500 students.

Walden merged with New Lincoln School in 1988, and sadly was forced to close in 1991 due to declining enrollment and financial difficulties.

Many of my characters from radical and intellectual families attend Walden. During the dark days of McCarthyism, it was safest for against the grain kids to be in alternative schools.

West End Avenue was created in the 1880s as 11th Avenue’s northern extension, meant as a commercial street for the incoming moneyed residents of nearby Riverside Drive. The Upper West Side wasn’t very populated at this time, and thus this new street was the far west end of the city. It might as well have been Oregon Country in the 1850s.

Most of the stables for the city’s remaining horses are on side streets. The stables date to the 19th century, but are fully updated with 21st century technology and conveniences. The horses live upstairs, and the carriages are downstairs.

Straus Park, © Luigi Novi / Wikimedia Commons, named for locals Isidor and Ida Straus, who chose to die together on Titanic

Residents describe West End Avenue as a village with a strong sense of community. Many families have lived there for generations. People know their neighbors, and only leave their homes feet-first.

The 70s and 80s are the Gold Coast, with the most beautiful buildings and wide boulevards. Parts of the avenue became run-down for almost sixty years in the 20th century, but now it’s back to its grandeur, and people are more worried about overgentrification than high crime rates. 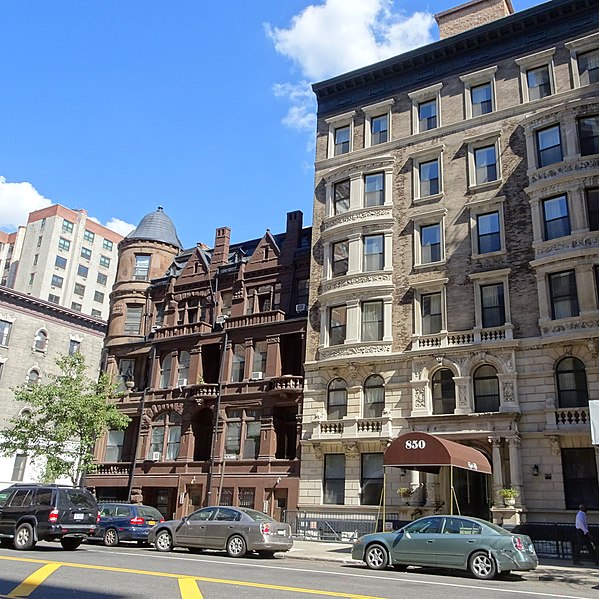 Shortly after immigrating in 1921, my characters Katrin and Anastasiya move into a huge penthouse on West End Avenue, in fictitious early co-op The Fourier, named for venerable Utopian Socialist Charles Fourier. When the Konevs move back to the city in 1952, they also move into The Fourier, along with several other families in need of upgraded housing.