St. Nicholas Park was created in the intersection of Harlem, Hamilton Heights, and Manhattanville in 1895. Its borders are 127th St. on the south, 141st St. on the north, St. Nicholas Avenue on the east, and St. Nicholas Terrace on the west.

The park was once the site of the Croton Aqueduct, which was built from 1837–42 and dramatically improved city sanitation and home plumbing. Prior to the aqueduct, there were many epidemics and a high mortality rate caused by tainted water. Wealthy people who lived in private houses were also able to start using bathtubs and sinks with running water, and public bathhouses for the masses came into being.

Less happily, many cellars were flooded due to a sharp decrease in usage of city wells and a subsequent rise in the water table. Sewers were then built on residential streets. 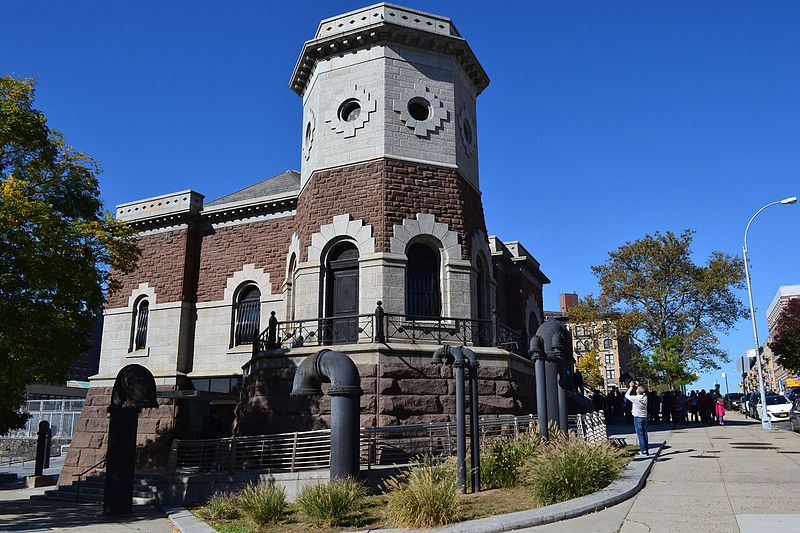 More land was acquired from 1900–06, and creation of the park began in earnest in 1906. Parks Commissioner and landscape architect Samuel Parsons, Jr. took charge of the design, saying, “[a] dominant note must be followed with a harmonious treatment, a high hill made higher, a rugged slope more rugged, a deep valley made deeper, thus invariably following nature’s lead.”

In 1909, the park expanded downward to 128th St. This new area included The Point of Rocks, where General Washington stood during the Battle of Harlem Heights in 1776. The expansion increased the park’s size to 23 acres.

A playground was added in 1931, within which was a garden where farm produce was grown for educational purposes. 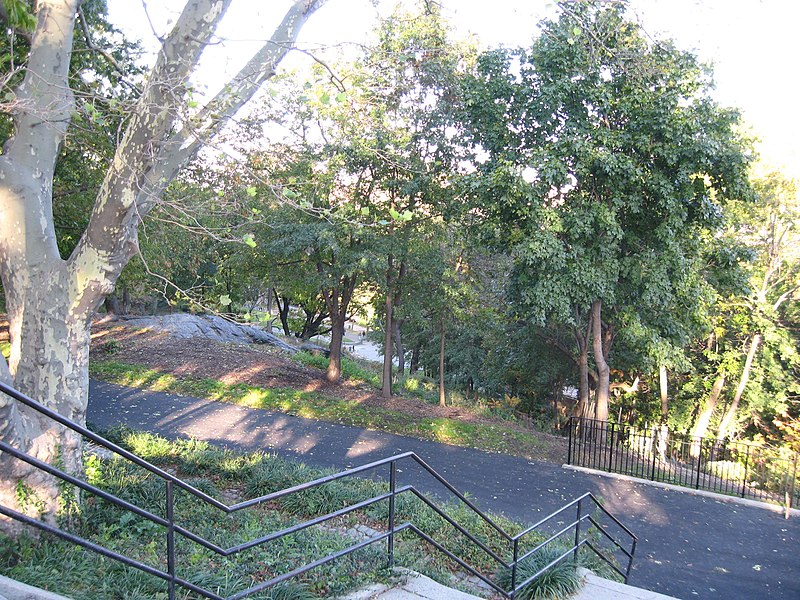 Since 2008, Hamilton Grange, the 1802 home of Alexander Hamilton, was moved 500 feet into the park. Prior, it stood on Convent Avenue on the north, facing 141st St. Its current location is within the borders of Hamilton’s original 32-acre estate.

My character Nestor Ugolnikov, a former Marine who lost his leg at Iwo Jima, is walking through the park with two bags of groceries on the eve of Orthodox Easter 1949 when he has a tumble in a patch of mud. His prosthesis, which he forgot to fasten tightly enough, falls off and is soon stolen by three mean little boys. Even worse, it begins raining.

His future wife Yustina Yeltsina-Baronova comes to his rescue by rebagging his groceries and getting a cop to search for the leg and give him a ride home. That December, they break up in St. Nicholas Park, but are soon back together and engaged, when Nestor finally realizes Yustina loves him just as he is and doesn’t care he’s missing a leg.

St. Michael’s Russian Catholic Church was built in 1859 on 266 Mulberry St. in Gingerbread Gothic style. It began life as the Chancery Office Building of the Old St. Patrick’s Cathedral, and was designed by James Renwick, Jr. and William Rodrigue, who also designed the new St. Patrick’s.

In 1936, the building took on a new life as a Russian Catholic church under the leadership of Father Andrew Rogosh, who arrived in New York on Christmas Day 1935 in the hopes of establishing an émigré apostolate. New York was one of the largest White Russian enclaves.

Though the disgustingly-named “Emergency Immigration Act” of 1921 and its follow-up, even more ridiculously xenophobia quota of 1924 made it nearly impossible for people from Eastern Europe to come to the U.S., there were some lucky people allowed to immigrate despite the strict, fear-fueled red tape.

Father Rogosh provided spiritual guidance and comfort to these new immigrants who’d been driven from their homeland by the Russian Revolution, Civil War, and Stalin’s goons. He often travelled to DP camps in Europe as part of his ministry.

Over the years, many people of all faiths and ethnicities came to St. Michael’s to hear the beautiful Russian-style Byzantine Rite service.

Sadly, gentrifiers drove up the property values, and the community had to relocate to St. Catherine of Siena on East 68th St. in 2019.

My character Varya Koneva visits the church after work in May 1952 and speaks with Father Rogosh about her spiritual dilemma re: a looming interfaith marriage. She’s engaged to a Polish Catholic (from the family who saved her niece Darya’s life during the war), and they have to choose a church for their wedding. Varya isn’t particularly attached to Orthodoxy, but doesn’t want to be excommunicated for marrying in a Catholic church.

Father Rogosh says there are few significant differences between Orthodoxy and Eastern Catholicism, and encourages her to try out St. Michael’s as her new spiritual home.