Sorry about the obnoxious URL! Some people don’t understand the meaning of public domain.

The Garden Country Day School was founded in Jackson Heights, Queens in 1923, by a group of parents who wanted a better school for their kids. Their institution was named for the new garden apartments. At the time, Jackson Heights was very rural, and so had ample space to create gardens.

As evidenced by the name, Jackson Heights was also intended to convey prestige equal to that of Brooklyn Heights. It was a planned community for bourgeois Manhattanites wanting a less congested living space. Shamefully and typically of the era, the apartments were restricted to WASPs.

The monolithic makeup thankfully began changing during the 1930s, and the legal restriction against Jewish residents ended in the 1940s. Bourgeois Columbians arrived in the 1950s, and then, following the nationwide pattern, the white bourgeoisie hightailed it to suburbia. Sadly, the remaining whites were very resistant to integration with African–Americans.

The first classes, K–3, met in the Laburnum Court Apartments. In 1925, upper elementary school was added, and in 1928, under headmaster Otto Flower, the school moved into its current location (the former Jackson Heights Tennis Club) on 79th St., between 35th Ave. and Northern Blvd. Mr. Flower also added more grades. In 1929, the first high school class of three students graduated.

A few years later, Garden Country School became an independent school. While all indie schools are private, they’re self-governing and financially independent instead of run by a religious organisation.

Indie schools aren’t prep schools, though academics are paramount. They’re also not always alternative schools (e.g., Montessori, Waldorf, Sudbury). From how I interpret it, indie schools are a nice middle ground of private schools, neither too preppy nor too freewheeling.

My characters Patya, Vladlena, Rodya, and Valentina send their kids to Garden School after they move to Queens Village in 1945. Patya and Vladlena’s daughter Karina, and Rodya and Valentina’s son Lev, started their education in a Russian Orthodox church school in Greenwich Village.

Patya feels strongly that real Americans don’t hide themselves away in parochial schools, but doesn’t want to lose the personal touch of private school in general.

When the two couples’ dear friends Tatyana and Nikolay move back to New York in 1952, to a house on their street, they likewise choose Garden School for their children.

The Gramercy Park Hotel was built from 1924–25 by Bing & Bing, one of the most prominent apartment development firms in early 20th century NYC, and designed by equally prominent architect Robert T. Lyons. It replaced the home of infamous architect Stanford White, and was done in Renaissance Revival style.

This hotel is adjacent to Gramercy Park, a private, fenced-in, two-acre park available only to fee-paying residents of the neighborhood by the same name. Its gates were first locked in 1844. Gramercy Park East also contains the city’s oldest continually-operating co-op apartment, built in 1883. 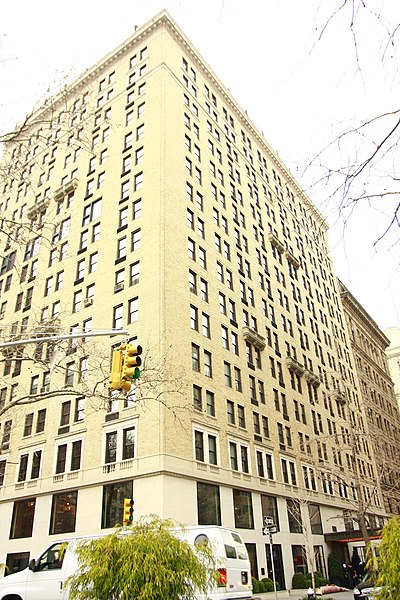 The hotel also boasts an art gallery, a bar, and several restaurants, including one on the roof. Babe Ruth frequented the bar during the Depression, and James Cagney and his wife Billie, who lived at 34 Gramercy Park, were frequent diners at the restaurant. 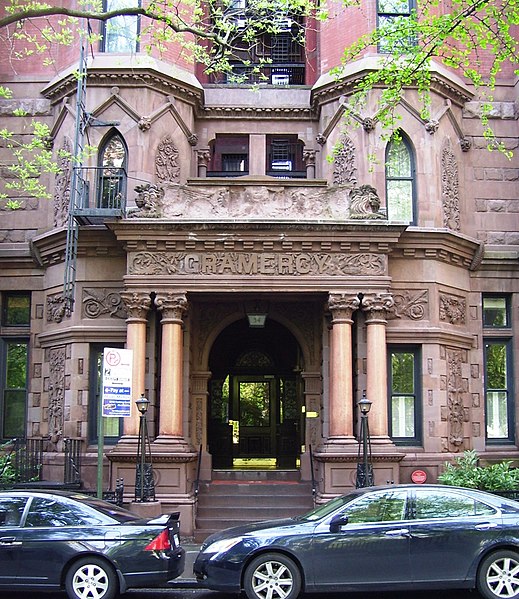 34 Gramercy, one of the city’s first apartments, Copyright Beyond My Ken

My characters Vasilisa and Dragomir go to the Gramercy Park Hotel’s restaurant for brunch on a very early double date with Vasilisa’s cousin Ilya and his girlfriend Milada. Despite being raised upper-middle-class, Milada is keenly aware they’re the most informally dressed people there, and hopes there’s normal food on the menu.

Shortly after Milada confesses her worries, Ilya reveals his secret senior art portfolio subject, Empress Aleksandra over the entire course of her life. He wants to gain a greater understanding of this much-hated woman, and thus stir sympathy in others as well.

Later, Ilya’s youngest sister Tamara and her husband Marek, a baker and chef, will work at the restaurant. I’m excitedly looking forward to a scene where they encounter frequent diner Cagney, my favoritest male actor of the sound era.