This year, my A to Z theme is New York City places which feature in my books, primarily The Ballad of Lyuba and Ivan, a family saga which will eventually span 1889–2000ish. Though most of these places still exist, my focus is on the way they were in a New York which now lives only in memory, in a time when normal people could afford to live there and weren’t all squeezed into rooms masquerading as apartments. 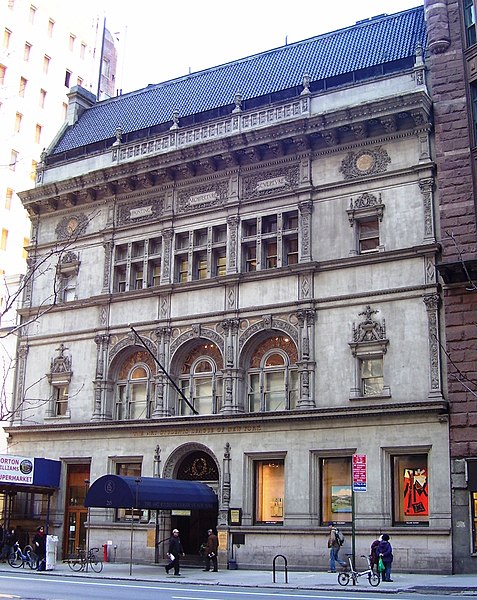 The Art Students League of New York is an art school on West 57th St., founded in 1875. From the jump, it’s been known for affordable classes and flexible schedules, for both serious artists and hobbyists. Many of its teachers have been famous artists, such as Augustus Saint-Gaudens, Jacob Lawrence, Frank DuMond, Wilhelmina Furlong, Lena Gurr, and Isabel Bishop.

Though some artists study full-time, the League has never offered degrees, certificates, or even grades. It’s not that type of art school.

The League was created in response to a desire for greater flexibility and variety in art education, and an expected gap in the National Academy of Design’s classes for the upcoming year. Many women were among the founders of this new art school. Initially, they met in rented rooms on 16th St. and Fifth Avenue.

When the National Academy of Design resumed its usual track in 1877, some felt the Art Students League was no longer necessary. However, students voted to keep it in business, and it was incorporated in 1878. They went from strength to strength, and soon needed bigger quarters.

In 1889, they were among the founders of the American Fine Arts Society. The AFAS building, at 215 West 57th St., became their joint HQ in 1892, and is now a designated New York City Landmark and on the National Register of Historic Places.

The League remained popular through the 1950s, thanks to its many esteemed teachers and innovative, influential alumni. It also attracted many WWII veterans eager to take advantage of the GI Bill. However, it temporarily dwindled in popularity during the 1960s.

An increasing number of art schools gained accreditation during this era, which meant one could now get a degree, not just a certificate or valuable experience. Minimalism, Concept Art, photography, and indirect, impersonal art were also big trends during this era, trends which were at odds with the type of art instruction offered by the League.

In 1995, the League was bequeathed the Sparkill, Rockland County estate of alumnus and former teacher Vaclav Vytacil by his daughter Anne. They now use it as a campus.

The League has long since regained its popularity, despite still not offering degrees. Many artists from a wide variety of socioeconomic classes and skill levels continue to flock to it.

Several of my characters take classes at the League to supplement their lacking fine arts education at traditional universities.

10 thoughts on “The Art Students League of New York”