Released 29 October 1904, Le Voyage à Travers l’Impossible (Voyage Through the Impossible) is a sequel of sorts to director Georges Méliès’s 1902 classic Le Voyage dans la Lune. This time, the intrepid explorers and their mad scientist leader travel to the Sun. Like the former, it satirizes scientific exploration.

As some might surmise from the title, it’s partly based on Jules Verne’s 1882 fantasy play Journey Through the Impossible. Méliès loosely interpreted the concept, however, seeing as the explorers in Verne’s story travel to the centre of the Earth, a distant planet, and the bottom of the sea, not the Sun.

At 374 meters, this was Méliès’s longest film to date. Le Voyage à Travers l’Impossible was one of the most popular films in the early years of the twentieth century.

The Institute of Incoherent Geography wants to embark upon a world tour like no other, one which shall “surpass in conception and invention all previous expeditions undertaken by the learned world.” Prof. Daredevil speaks first, but his plan is soundly rejected as out of date.

Next to speak is mad engineer Mabouloff (Méliès) (called Crazyloff in English-language materials, seeing as maboul means “crackpot” and “crazy” in French). He proposes an impossible voyage taking advantage of “all the known means of locomotion—railroads, automobiles, dirigible balloons, submarine boats…”

His proposal is met with most enthusiastic approval, and the society immediately begins preparing for this crazy voyage.

The voyagers and their required equipment take a train to the Swiss Alps, where the adventure truly begins. The first proper leg of the journey transpires in Auto-Mabouloff (which kind of resembles a golf cart), which takes them through the Alps.

Sadly, the car crashes while trying to cross the summit of the Rigi. Mountaineers come to their rescue and rush them to hospital.

Upon recovering, our intrepid travellers take a train which attempts to climb a second Alpine summit, the Jungfrau. This time, they’re successful, thanks to dirigible balloons tied to the train. Their journey takes them all the way into space and eventually the Sun, where they crash-land. 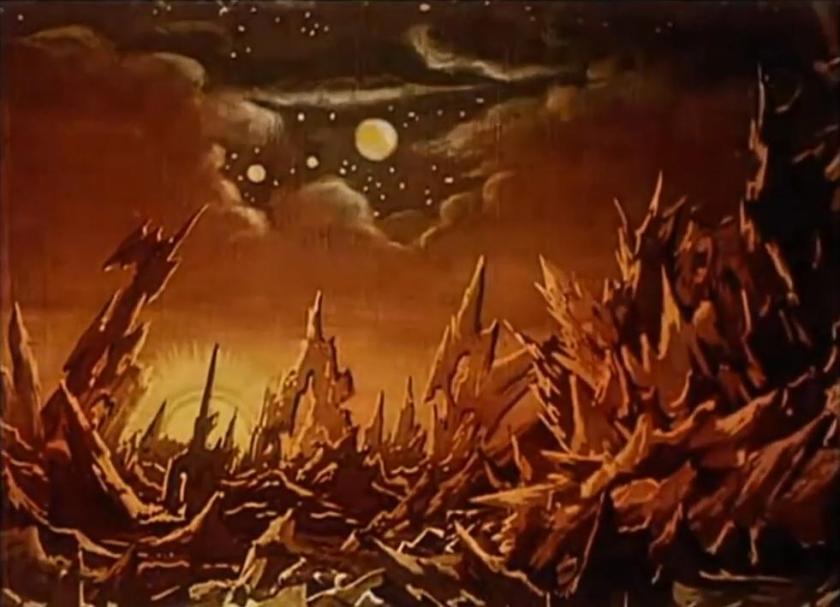 The intense heat is too much to bear, and the travellers climb into an icebox they conveniently brought. All, that is, except Mabouloff, who’s horrified to presently open the icebox door and find his friends frozen in a huge ice block. Luckily, the fire he starts with help from some straw soon revives them.

Everyone relocates to their submarine, which lifts off from a solar cliff and travels back through space, finally landing in the ocean depths. After several minutes underseas, a boiler causes an explosion, and the travellers are spewed into the air.

They land at a seaport, along with the submarine wreckage, and triumphantly return to the Institute of Incoherent Geography. They’re welcomed back with a grand reception.

Méliès also filmed an optional epilogue, sold separately, which starts in Mabouloff’s study. There he’s criticised by the Institute for losing so much precious transportation equipment during this impossible voyage.

Mabouloff lays out a plan for recovering the equipment—a magnet to collect the lost car in Switzerland, the train in the Sun, and the submarine underwater. This magnet works just as proposed, and a celebratory banquet is held to laud Mabouloff.

The epilogue was believed to be lost till the 1970s, when Méliès scholar John Frazer found it in the Academy of Motion Picture Arts and Sciences’s archives, along with other negatives from Star Film’s New York office. Despite this, a 2008 Méliès filmography lists it as lost.