Premièring in NYC on 15 December 1944 and in L.A. on 22 December, with a general release on 16 February 1945, The House of Frankenstein was the first multi-monster movie. Prior, only two monsters had appeared together. In early drafts, even more Universal monsters were featured—the Invisible Man, the Ape Woman, the Mummy, the Mad Ghoul. Working titles included The Devil’s Brood and Chamber of Horrors.

This film marked the début of Glenn Strange as Frankenstein’s Monster. His predecessor, Boris Karloff, is said to have coached him on how to play the role. Karloff’s appearance was to be his last in Universal’s classic horror cycle.

A mad scientist, Dr. Gustav Niemann (Boris Karloff), was thrown in prison for robbing graveyards in his quest to replicate Dr. Frankenstein’s work in bringing the dead back to life. His hunchbacked assistant Daniel (J. Carrol Naish) is very eager for this project to take place, since he feels it’ll cure his deformity.

After their break from prison during a lightning storm, they run across the travelling Prof. Lampini (George Zucco) and help to push his circus wagons out of the mud. To repay the favor, Lampini invites them into one of the wagons.

This isn’t exactly the beginning of a beautiful friendship, since Dr. Niemann and Daniel murder Lampini and take over his horror show. 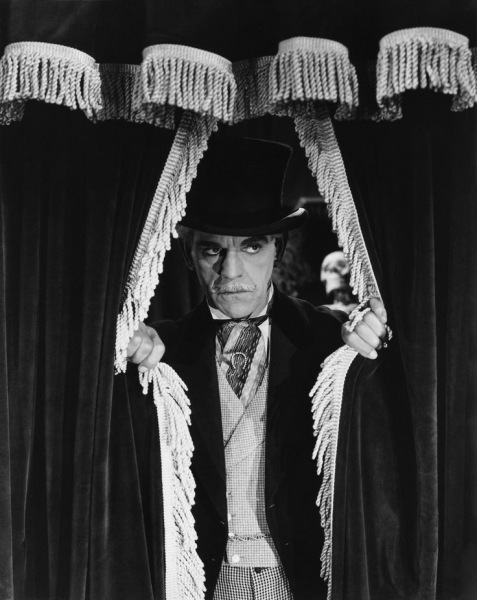 Who should attend the next show but Bürgermeister Hussman (Sig Ruman), the reason Dr. Niemann was thrown in prison! As part of his quest for revenge, Dr. Niemann brings Count Dracula’s skeleton to life and convinces him to do exactly as he’s told.

While Hussman is walking home with his grandson Karl and his new bride Rita (Anne Gwynne), Dracula (John Carradine) pulls up alongside them and offers a ride. The Hussmans also agree to have a drink with him. 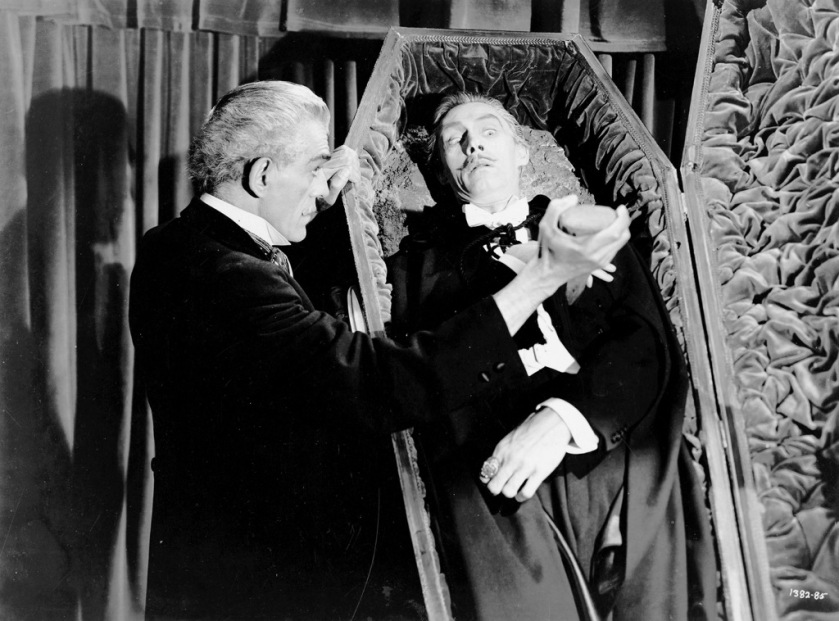 It doesn’t take long for Dracula to bring Rita under his spell with a hypnotic ring. That mission accomplished, Dracula assumes his bat form late at night and kills Hussman. It’s too late by the time Karl discovers their guest’s true identity and rushes to his grandfather.

Things go from bad to worse when Rita disappears while Karl is phoning for help. He races after Dracula’s departing carriage, but to not avail. Karl alerts a team of police on horseback, whom he gives chase with.

Rita is recovered after a road accident caused by Daniel throwing Dracula’s coffin into the path of the pursuers. Dracula himself is killed by the sunlight.

Dr. Niemann’s next stop is Castle Frankenstein, which is now in ruins. He and Daniel are ordered by cops to scram, since travelling shows like theirs aren’t allowed.

More trouble immediately follows when Daniel comes to the rescue of a young Romany girl, Ilonka (Elena Verdugo), being whipped and turns the whip on the attacker. Daniel begs Dr. Niemann to take in the injured girl till she recovers. Since the cops also ordered the Romany out, she’s left without any familiar faces.

Ilonka is initially alarmed when she discovers Daniel’s a hunchback, but quickly becomes friendly and accepting again. Daniel’s been kind to her, so it doesn’t matter what he looks like.

While Dr. Niemann and Daniel are prowling around the ruined castle in the middle of the night, Daniel falls through the floor and into a cave. Explorations reveal the frozen bodies of the Wolfman (Lon Chaney, Jr.) and Frankenstein’s Monster (Glenn Strange), preserved inside ice blocks.

Daniel and Dr. Niemann light a fire to unthaw the bodies. First to be freed is the Wolfman, Larry Talbot, who demands to know why he’s being tortured like this. He can’t bear living with the curse of transforming into a wolf at every full moon.

Dr. Niemann promises to free him from the curse if he helps with reanimating the Monster. This promise is short-lived, since despite Larry and Daniel’s begging, Dr. Niemann refuses to work on anything but reviving the Monster and getting revenge on two other people.

Meanwhile, Larry becomes the Wolfman at the next full moon and kills someone. Daniel tries to tell Ilonka about Larry’s true identity, but she’s too in love with Larry to believe it. She screams at Daniel that she hates him and that he’s ugly, and runs away. Awash in anguish and unrequited love, Daniel begins whipping the Monster’s body.

The locals form a search party to find the werewolf after the body of the Wolfman’s latest victim is discovered. During the search, Larry tells Ilonka the truth about himself, and says Dr. Niemann won’t help him.

Larry confronts Dr. Niemann again while the Monster is being reanimated, and once again is rebuffed.

Everything comes to a head at once when Larry transmogrifies into the Wolfman again, the angry villagers converge on Dr. Niemann’s house, and the Monster is reanimated.