Premièring 6 October 1924 in Vienna and 13 November 1924 in Berlin, anthology film Waxworks (Das Wachsfigurenkabinett) was director Paul Leni’s final feature film in his native Germany (though he continued working as an art director there till 1926). His directing career began anew in Hollywood with The Cat and the Canary.

A nameless poet (William Dieterle) responds to an ad seeking an imaginative publicity writer for a waxworks exhibit. The proprietor (John Gottowt), who works with his daughter Eva (Olga Belajeff), asks the poet if he can write startling stories about three figures—Caliph of Baghdad Harun al-Rashid, Tsar Ivan IV (Ivan Grozniy, whose Russian epithet does NOT mean “Terrible”), and Spring-Heeled Jack (a terrifying figure in Victorian folklore).

The poet writes himself into al-Rashid’s story as pie-baker Assad, and Eva becomes his wife Maimune. Trouble starts when a blanket of smoke from the pie oven causes al-Rashid (Emil Jannings) to lose a game of chess.

The Grand Vizier is dispatched to find the guilty party and kill him, but loses sight of his mission when he sees the beautiful Maimune. Upon his return to the palace, the Grand Vizier suggests al-Rashid take her for himself.

That night, al-Rashid mingles among his subjects incognito, in search of this great beauty. Outside the house, al-Rashid overhears an argument between the couple, culminating in Assad’s promise to prove his manhood by stealing al-Rashid’s wishing ring before dawn.

While Assad is away on this foolish, dangerous mission, al-Rashid enters the house and makes sure the door locks behind him. Maimune is terrified to see this intruder, even after he tells her he’s the Caliph.

Al-Rashid returns to the palace after putting the moves on Maimune, and is in a deep sleep when Assad slips into his bedroom and cuts off his arm. As we learnt in the opening segment, al-Rashid’s wax figure is missing an arm, and the poet wants to write a story explaining how that came to be.

But, as so often happens in horror and fantasy, not everything is always as it seems to be.

The poet then begins writing a story about Tsar Ivan IV (Conrad Veidt) stealing into the Kreml with his astrologer to gloat over his poisoned victims’ deaths. He particularly enjoys watching the last sand in the hourglass run out for each new victim.

Ivan’s astrologer warns him the poison-maker might write his name on the next hourglass. Given how increasingly paranoid Ivan was during the latter portion of his reign, one can predict his reaction!

The poison-maker has pity on one of the victims, and instead does exactly as the astrologer predicted.

Next day, a nobleman visits to remind Ivan he promised to attend his (the nobleman’s) daughter’s wedding. Ever-paranoid, Ivan changes places with the nobleman and arrives at the wedding as the driver.

Far from being a happy, joyful occasion, this wedding turns into a nonstop parade of horrors, esp. for the couple (Dieterle and Belajeff). One of the accurate translations of Ivan’s epithet, Grozniy, is Dreadsome, and he indeed lives up to it here. 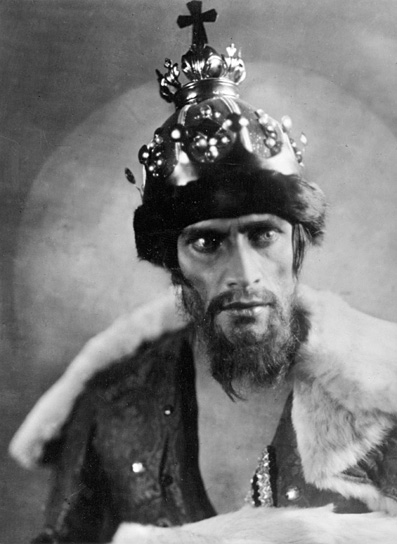 The poet falls asleep while writing the final story (by far the shortest) about Spring-Heeled Jack (Werner Krauss), and dreams his wax figure comes to life to stalk him and Eva through the fairgrounds. Just as in The Cabinet of Dr. Caligari, our sense of reality is put to the test.

A fourth story was in the original script, about Rinaldo Rinaldini (to be played by Dieterle). Though this story was cut for budgetary reasons, Rinaldi still appears with the other wax figures. Rinaldini is an elegant robber captain in Christian August Vulpius’s 1797 novel of the same name.

2 thoughts on “Horrifying history in wax comes to life”