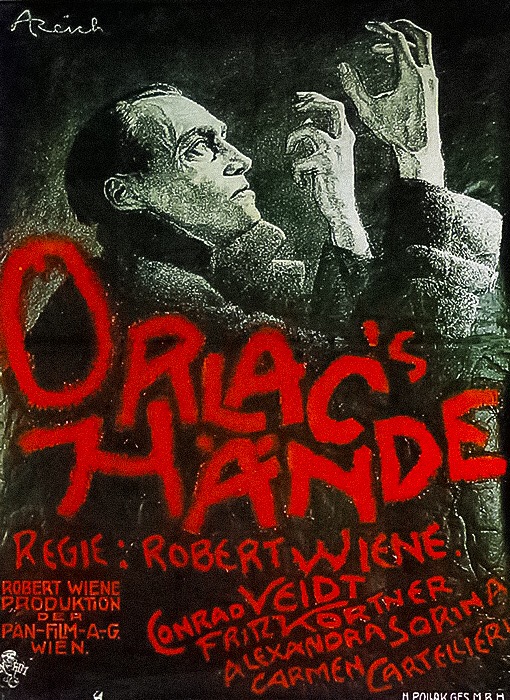 Germany approved the film for release on 24 September 1924, for adults only. In January 1925, Saxony’s Ministry of the Interior filed a censorship petition which was rightly rejected as ridiculous.

The film was directly remade in 1935 and 1960, in addition to inspiring many other films and TV shows.

The film opens with Paul Orlac’s wife Yvonne (Alexandra Sorina, née Aleksandra Tsvikevich) reading a letter where he promises he’ll be home soon. In an obvious bit of foreshadowing, Orlac proclaims how he can’t wait to run his hands through her hair and over her body again.

We then meet Orlac (Conrad Veidt), a successful concert pianist who’s concluding a tour. Disaster strikes when his train home gets into a very serious accident. Though Orlac is among the survivors pulled from the wreckage, he suffers a fractured skull and the loss of his precious hands.

Yvonne begs the surgeon, Dr. Serral (Hans Homma), to save her husband’s hands, which are more valuable to him than his life. Towards this end, Dr. Serral transplants the hands of a recently executed criminal.

Orlac suspects something funny is up even before the bulky bandages come off, and the funny feeling continues after he sees “his” hands again. When Orlac awakes from a horrific nightmare, he finds a note in his lap admitting the terrible truth.

He goes to confront Dr. Serral, who confirms this disturbing information.

Orlac vows to never let these criminal hands touch another person, a resolve which is put to the test when he returns home to his loving wife. He can barely even bring himself to touch his beloved piano.

Orlac is even more horrified when he learns more about Vasseur, the criminal whose hands he now bears, since Vasseur’s guilt was conclusively established by fingerprints all over everything.

It gets worse when Orlac finds a knife in his house identical to the one Vasseur used. He’s now convinced these hands have given him a propensity to violence, though that’s never been in his nature.

A phantom force compels Orlac towards the knife he hid in the piano, and Yvonne catches him stabbing at the air in the middle of the night. Orlac orders her to stay away from him, and she retreats in fear.

Orlac’s next move is to try cutting his hands off, but he regains his senses. He then gets into trouble with the maid, Regine (Carmen Cartellieri), who just feuded with her lover. Orlac puts his hands on her head, and she says they feel like the hands of a killer.

Orlac goes to confront Dr. Serral, begging him to remove the cursed hands, but Dr. Serral tries to tell him the body is ruled by one’s head and heart, not the hands.

Meanwhile, creditors are hassling Yvonne. Since Orlac refuses to play the piano with criminal hands, there’s no money coming in. Yvonne begs for a month, but they only give her till tomorrow. She wants to go to her rich father-in-law for help, but Regine says he’s an awful person who hates their family. 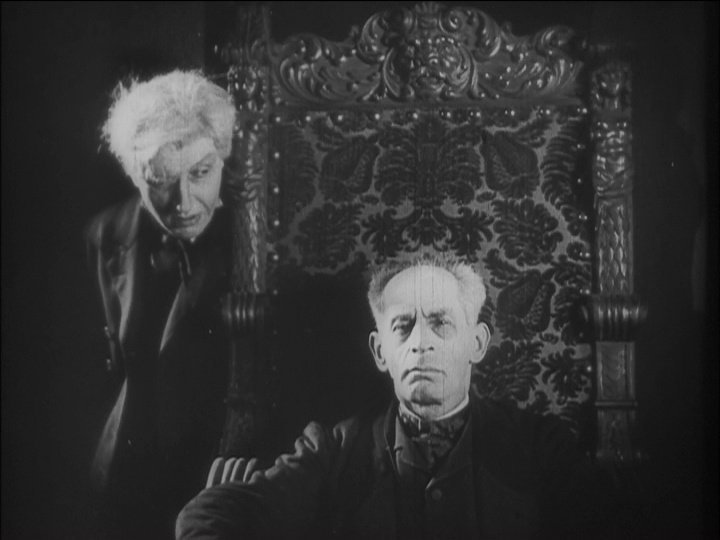 Regine says Orlac must go to his dad to beg. Though this greatly upsets Yvonne, she knows there’s no choice.

When Orlac arrives at his dad’s house, the greatest horrors of all begin unfolding.

Real-life horror: Fritz Strassny, né Straßni (Orlac’s dad), who was Jewish, was dismissed from Austria’s venerable Burgtheater in 1938. He was deported to Theresienstadt in 1942 and murdered two and a half weeks later.

Conrad Veidt, who was strongly anti-Nazi, escaped to England with his Jewish wife just ahead of a Gestapo death squad’s arrival at their house in 1933.