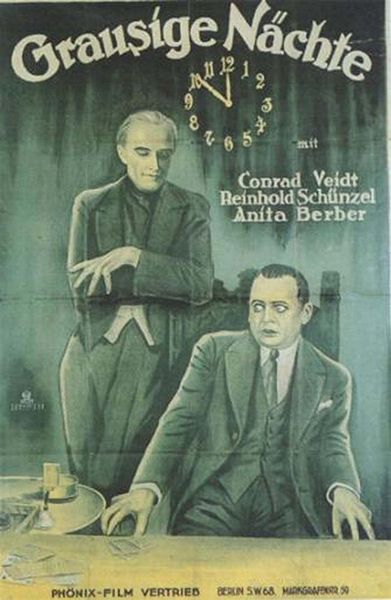 The Black Cat is based on an 1843 Edgar Allan Poe story of the same name, with parallels to “The Tell-Tale Heart.” Both are about murderers who cover up their crimes and eventually are driven mad by guilt.

The Suicide Club is based on an 1878 three-story collection by Robert Louis Stevenson, also of the same name. They’re about a macabre club which is investigated by Prince Florizel of Bohemia and his buddy Colonel Geraldine. The club’s president is criminally-inclined.

The horror starts in a rare bookshop when three people (Conrad Veidt, Reinhold Schünzel, and Anita Berber) step out of paintings to read horror stories. They periodically appear in wraparound segments and play the leads in all five stories.

Their first story, The Apparition, begins with a woman who confides to a friend (Veidt) that her husband (Schünzel) has lost his mind. She rightly divorced him after he tried to strangle her, but now he follows her everywhere. She begs for protection against this madman.

They begin an affair and check into separate rooms of a hotel, where her ex comes looking for her but is turned away due to no vacancies.  That night, her lover totally freaks out when he finds her room empty.

He tries to set his mind at ease with the thought that it was the wrong room, and in the morning asks to be announced in Room 117. Once again he fills with horror when no one is there. Even worse, her name isn’t in the hotel register, and the receptionist claims he arrived alone.

The horror only increases from there. 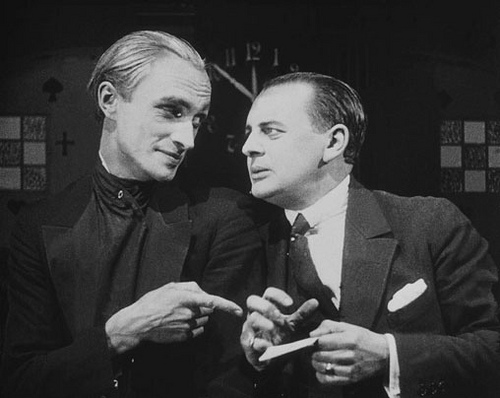 In The Hand, things start innocently enough at a party, but soon it’s revealed there are two suitors (Veidt and Schünzel) competing for the same lady.

As so often happens with suitors who can’t gracefully accept no for an answer, the rejected one kills his rival. Before long, he’s tortured by ghostly visions of his victim’s hand.

Things go from bad to worse during a séance. 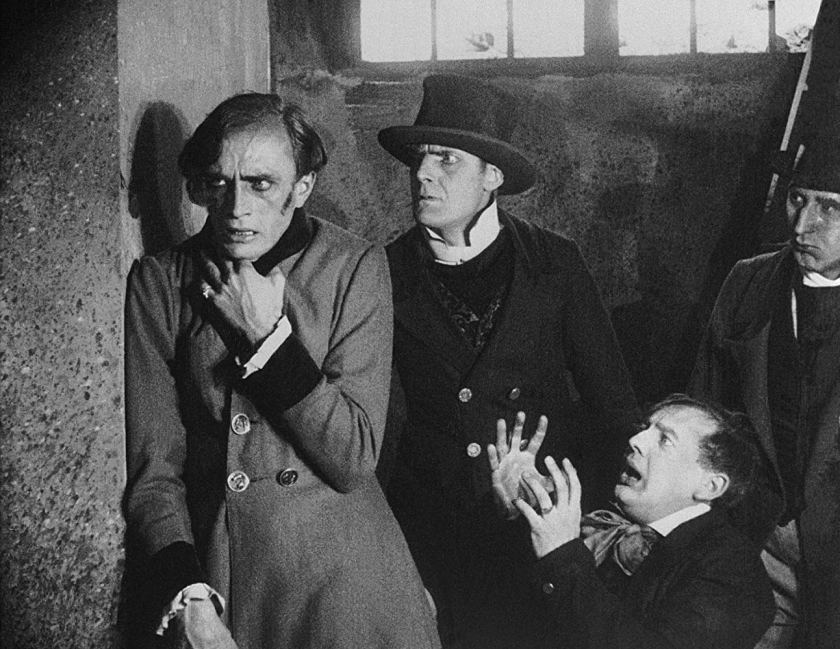 In The Black Cat, a drunk (Schünzel) becomes more and more out of control, culminating in the murder of his wife. Not realising the screams were heard outside, he drags her body into the cellar and walls her up.

Next day, the man who overheard the murder (Veidt) visits, and the drunk claims his wife is out of town. Soon everyone in town is saying the drunk murdered her.

The witness takes his suspicions to the authorities, who come to search the house. Nothing seems outwardly suspicious till cracks start appearing in the cellar wall.

The witness axes an opening, and out jumps the wife’s loyal black cat. The writing’s on the wall regarding his guilt!

In The Suicide Club, a detective (Schünzel) investigates a seemingly empty house and discovers people inside. When he confronts them, he’s told it’s “just” a suicide club.

The members don’t take very well to the stranger in their midst, esp. not after he refuses to join their club. They want to kill him, but the lone woman pleads for clemency.

Her brother (Veidt) tells him he’s part of a club where one can never leave, and takes him to a card game behind a wall inscribed with the famous words “Abandon all hope, ye who enter here.”

Whoever draws the spade dies that night.

Der Spuk is set in the 17th or 18th century, in the home of a well-to-do baron (Veidt). All the lines in this story are delivered via poems.

Trouble begins when an injured knight (Schünzel) is brought in to spend the night. The baroness, feeling neglected by her husband, immediately begins flirting with him.

Far from being angry to discover this cuckoldry in the making, the baron encourages her to have an affair. But since this is a horror story, their romance is disrupted by mysteriously moving objects and deathly figures.

When this final story concludes, the bookshop’s owner comes in with police and finds his store empty. The three readers have returned to their paintings.