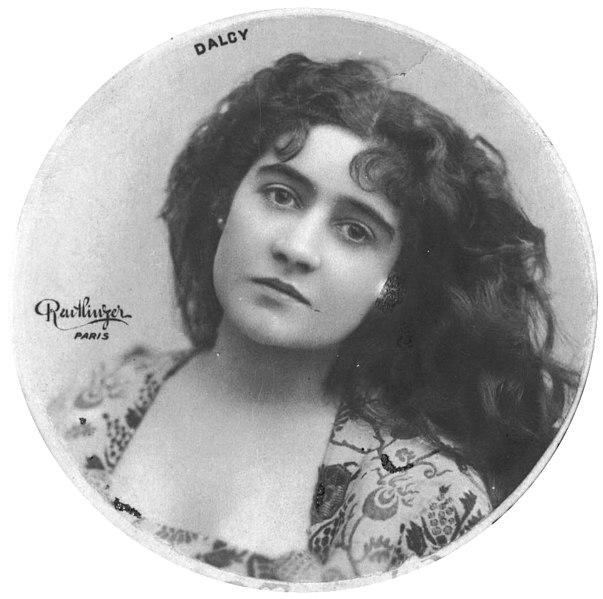 Robbing Cleopatra’s Tomb (known in its original French as simply Cléopâtre) stars Méliès as a tomb-robber and Jehanne d’Alcy as Cleopatra’s ghost. Our dastardly tomb-robber chops Cleopatra’s mummy into pieces, then “produces a woman from a smoking brazier.”

D’Alcy was the first film actor to portray Cleopatra VII (albeit as her ghost). She and Méliès later became one another’s second spouses.

On 22 September 2005, it was announced this film had been found, but alas, it turned out to be a different film with the robbing of an Egyptian tomb.

In The Devil in a Convent (Le Diable au Couvent (1899), Satan arises from what appears to be a baptismal font and disguises himself as a priest delivering a sermon to nuns. They flee in fear when he transmogrifies back. When he’s alone, Satan conjures up several demonic statues, a large mask, and many other devils.

Their fun in the convent ends when the nuns return. The other devils flee, and Satan is pursued by many priests. An angel statue comes to life and slays him with a sword, and Satan vanishes in a cloud of smoke.

In 2010, Cinémathèque Basque received a box of 32 films in 35mm, including hand-coloured copies of The Devil in a Convent and another 1899 Méliès film, The Mysterious Knight. These films were rescued from a rubbish bin in Bilbao, Spain in 1995.

The Pillar of Fire (Danse du Feu) (1899) was originally released in the U.S. and U.K. as Haggard’s “She”—The Pillar of Fire. The Devil, dressed in green, leaps out of a cauldron and begins creating smoke all over the room with a bellows. He then conjures a young lady who performs a serpentine dance before disappearing in a column of smoke.

This was the first film based on British writer H. Rider Haggard’s 1887 novel She: A History of Adventure. Given the scant length of films in this era, Méliès chose to use title character Ayesha (not the protagonist) as inspiration for one of his famous trick films. There are at least ten other film adaptations of this book.

Cagliostro’s Mirror (Le miroir de Cagliostro) (1899) is sadly lost. It depicted a basket of flowers appearing in large frame on a wall, followed by a beautiful young lady’s picture. Her picture becomes animated, and she begs to get out of the frame. A visitor starts to comply, only to see her turning into a skeleton and huge devil’s head.

Faust and Marguerite (known in French as Damnation du Docteur Faust) (1904) was Méliès’s fourth and final film adaptation of the German legend of Faust, a scholar who makes a deal with the Devil and finds himself in way over his head after the initial thrill wears off. Once more, Méliès played the part of Mephistopheles, the Devil.

Unfortunately, this film isn’t widely available to the general public in its 15-minute entirety. A print with some missing scenes is held at the Paper Prints collection in the Library of Congress, and a short fragment of the 15th and 16th scenes is in a private British collection.

Like many of Méliès’s other films, this one too is meant to be played alongside spoken narration. It can be difficult to figure out exactly what’s going on without this narration. Those who’ve seen F.W. Murnau’s classic 1926 Faust will be familiar with the storyline, though there are some divergences.

This particular Faust adaptation is based on Charles Gounod’s 1859 opera. Méliès’s 1903 version was based on Hector Berlioz’s 1846 opera.

One thought on “A quintuple shot of antique horror”