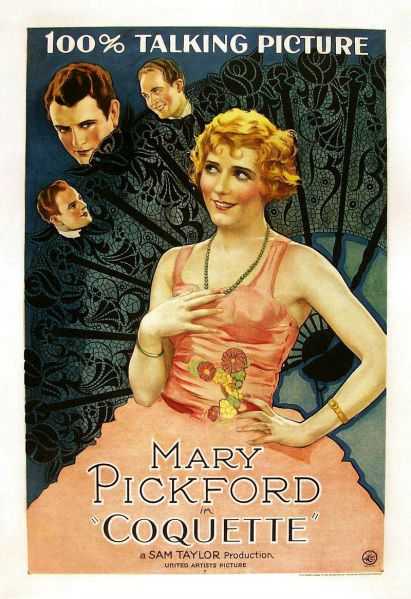 Released 12 April 1929, Coquette was Mary Pickford’s highly-anticipated talkie début, and showed her in a whole new role. Since 1909, Mary had been one of the most popular, beloved film stars in the world, and was famous for her long golden curls. That hairstyle and her diminutive height enabled her to play little girl roles well into adulthood.

Mary had tried to break away from this typecasting with adult roles, but those films weren’t as popular as her child role films. When her mother Charlotte passed away in 1928, Mary finally felt free to bob her hair. The dawn of sound cinema was as good a time as any to match that new haircut to more mature films. 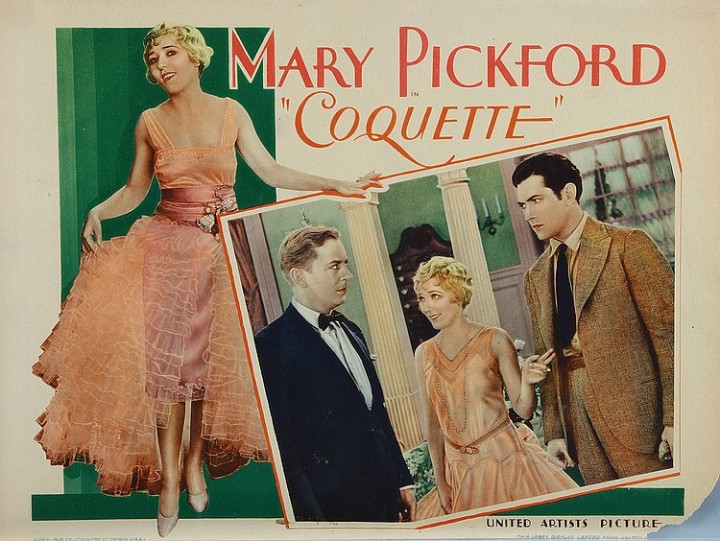 Mary eagerly installed a sound stage at Pickfair Studios in 1928 and used the best technology available at the time, thus avoiding the worst problems associated with many other very early talkies.

She then bought the rights to Coquette, a popular 1927–28 play starring Helen Hayes. In comparison to Mary’s previous adult roles like Rosita (1923) and My Best Girl (1927), Coquette saw her playing not just any type of adult, but a flapper.

Though Mary had been on the stage prior to film acting, she nevertheless worried her voice wouldn’t be good enough. She thought her first sound test was too pipsqueaky, and embarked on serious vocal lessons.

Coquette was based on real events in South Carolina, with some dialogue coming verbatim from a court case. Though the Hays Code didn’t yet exist, censors destroyed the entire plot of the play. The resulting storyline is rather milquetoast (and badly dated). In the play, Norma Besant is pregnant out of wedlock, but in the film, the only scandal is spending the night in a cabin with a man (with nothing sexual happening).

(Full disclosure: I was unable to find the film in its entirety, and have only watched clips.)

Norma pretends to agree, then secretly arranges to marry Michael when he makes good in six months and can buy her a house. 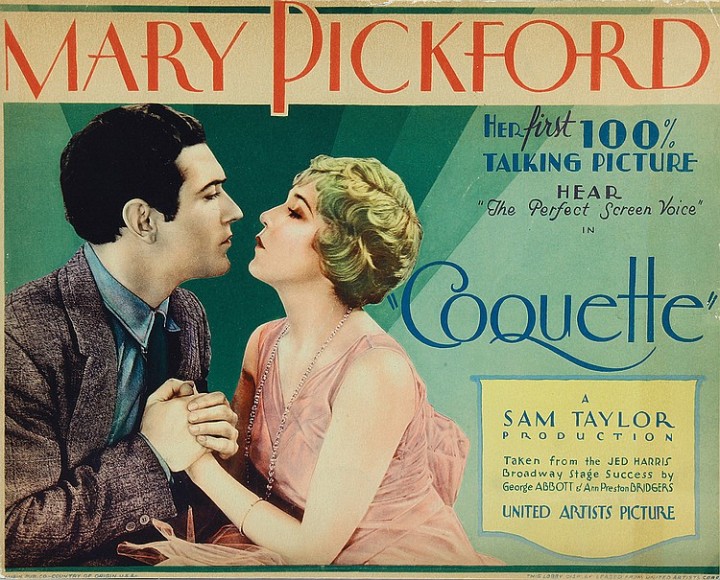 This era being what it was, rumours are soon swirling about how they spent the night together alone, and Norma’s reputation is ruined. She says all they did was talk about their future and drink coffee, but everyone believes they were automatically up to no good.

Michael is livid, and vows to ask Dr. Besant for Norma’s hand in marriage stat.

Dr. Besant is still adamant Michael never marry his daughter, and after a heated argument, Michael changes track and decides to elope with Norma as soon as possible. Norma is ordered into her room, and Dr. Besant leaves with a gun.

Things get really ugly after this, culminating in an emotional court case.

During the première by NYC’s Rialto Theatre, a fuse blew, rendering Coquette silent. The projectionist rewound it and began again, with poor, intermittent sound. Technicians had to be called in, and the third try was finally successful.

Reviewers had mostly positive things to say, and Coquette earned $1.4 million ($21,005,812 today). In 1930, Mary won Best Actress Academy Award. The first ceremony of the year before had only included silents, not wanting talkies to create unfair competition.

Mary really wanted that award, so much so she fêted judges at her home in Pickfair. Though Coquette was a critical success, ever since she won that award, many have viewed it more as a lifetime achievement award for her entire body of work than actual quality in that one film. Mary herself later said she wished she could burn all copies.

Though what I’ve seen of the film doesn’t jump out at me as horrible, I definitely see the criticism that the acting is badly dated. Very early talkies are often hard to judge, since everyone was still learning another mode of acting, but this clearly isn’t Mary’s strongest performance by a long shot.

Everyone’s acting is so stagey, and the Southern accents are obviously fake, not believable at all. The severe censorship also seriously hurt the overall story. It would’ve been stronger had the scandal been Norma’s out of wedlock pregnancy. The replacement seems overly quaint even by 1929 standards.

Mary was capable of so much better. If you’ve never seen one of her films before, I’d highly recommend starting with one of her silents. Her four starring sound films aren’t representative of her acting power.

2 thoughts on “And the Worst Best Actress Award goes to…”